And have we mentioned a global pandemic, hurricanes in the Gulf of Mexico and difficult arbitrage economics? Prices are sinking, and they're sinking fast.

Welcome back to our monthly blog: The US Crude Export Chronicles, by Argus Senior Reporter Eunice Bridges (@eunicebridges12) and Associate Editor Amanda Hilow (@HilowMidpoint). Come back every month for Argus’ take on US crude exports and how they are faring amid a shaky recovery from the Covid-19 shock.

Yes, US crude exports have once again topped 3mn b/d. But recent numbers are presenting a serious challenge to the rebound. WTI Houston is hovering just 50¢-80¢/bl higher than the price of the same crude in Midland, Texas, or less than half of the cost it takes to ship crude from Midland to Houston in the first place. It usually takes an additional 20¢-30¢/bl to load crude onto a tanker for export purposes, but waterborne WTI prices in Houston fell this month to discounts against the pipeline WTI Houston index of 50¢/bl or wider.

Generally speaking, crude export volumes would begin to contract with these dynamics because sellers have to eat loading costs on their own. But demand in the domestic market has shifted primarily to refinery supply over the last few months, leading to a surplus of light sweet crude that needs an outlet. 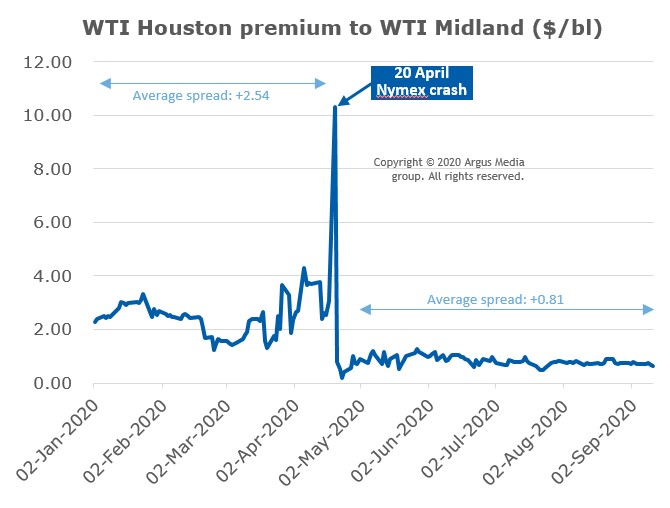 This is starting to sound like a broken record, but the DAPL drama continues.

In the latest twist, a federal judge on 17 September approved a schedule that essentially delays a decision on whether to shut the 570,000 b/d Dakota Access pipeline (DAPL) until December.

US District Court Judge James Boasberg set a timeline for briefings and responses through 18 December on a motion by the Standing Rock Sioux tribe and other plaintiffs to halt the flow of oil on DAPL after the court vacated a key easement.

Filings in the case are coming fast and furious with the December deadline approaching. North Dakota state officials have cited “the tone” of Boasberg’s earlier filings as a major sign of concern. A DAPL shut down could curtail US exports as it is the largest takeaway pipeline out of the Bakken and connects to a large pipeline to the Gulf coast.

US crude exports rebounded big time in July. Like 18pc big. And we can thank China for a hefty chunk of it. Overall exports averaged 3.24mn b/d in July, up from 2.75mn b/d in June, according to the latest monthly Census trade data. This could indicate an important pivot after four straight months of Covid-19-related declines.

August and September US crude export figures will likely be somewhat skewed because of powerful storms that moved through the US Gulf of Mexico shutting ports and other infrastructure. But the two top outlets for US exports – Corpus Christi and Houston – saw relatively little damage from the storms. And of course, there is that pricing issue (see hot topics above).

The next round of midstream earnings starts in earnest toward the end of October and could answer some lingering questions. Has the capex slashing reached an end? How long will the specter of Covid-19 haunt the markets? Whether we’re in for a trick or a treat, it is bound to be a thrilling earnings season.

Looking further down the road, Max Midstream announced an ambitious plan to add pipeline connections and storage to build up a potential new crude export hub at the Port of Calhoun, on the Texas coast between Corpus Christi and Houston. The company says a first phase could be complete by November, which would mean some exports before year-end.

The plan seems rather ambitious considering the situation is already pretty dire for US crude export prices from a supply-side perspective. Fob WTI prices at the US Gulf coast averaged about $40.70/bl during the most recent trade month — just 45¢/bl cheaper than the average price its trading for on a delivered basis in Europe.

The pickings are good for international refiners as US supplies continue to fall in value to compete with rising Mideast Gulf supplies as Opec+ eases its output restraint target for the remainder of the year.

We’ll be watching how the market resolves itself, but in the meantime we wish you smooth sailing in these choppy waters.

The US Crude Export Chronicles: June 2020

US crude exports to China are rebounding after starting off the year at a glaring zero, but will the upswing continue?