While all eyes were on the Ever Given, a flotilla of ships in northern China was held up for even longer. Delays are eating into arbitrage as ports struggle to keep up with increased crude imports — with costs to traders sometimes topping more than $1.1mn a day.

You may be well acquainted with the Ever Given, the infamous container ship whose late-March accidental grounding in the Suez Canal blocked the key waterway for six days. The stoppage caused hundreds of vessels, including 62 oil tankers, routed through the canal to run late. And for those delayed ships, it caused massive demurrage fees.

But as the world was rapt with the incident at the Suez Canal, there was another set of ships in northern China, where delays are common, in the depths of an even longer delay.

Tankers can sit for up to 20 days at the key port of Qingdao, where waiting times are especially long if they do not have a reserved storage space to offload their crude cargoes. 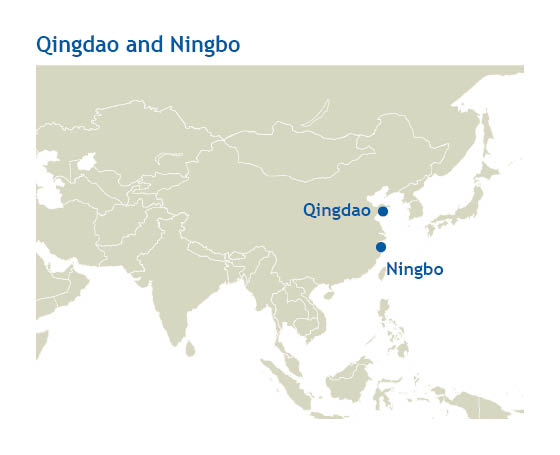 One of the recently held-up tankers was the Bunga Kasturi Enam VLCC, which vessel tracking shows sat outside of Qingdao from 23 March — a day before the Ever Given grounding — to 3 April, five days after Suez Canal traffic resumed.

There are 31 VLCCs, six Suezmaxes, and 19 Aframaxes waiting outside Chinese ports — primarily Qingdao and Ningbo — waiting to discharge, with half of them having idled for longer than seven days, according to data from vessel tracker Vortexa. 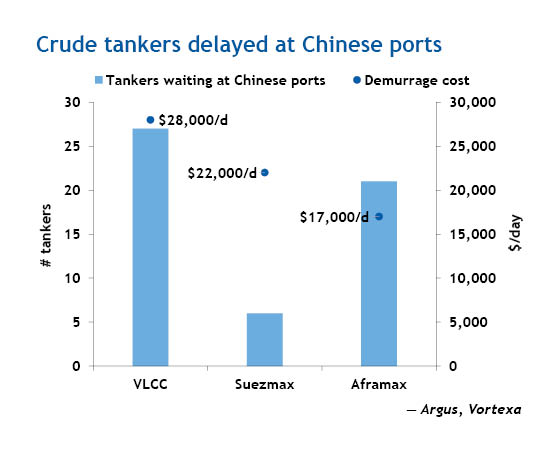 Sure, the Suez Canal blockage was big, but have you heard of Chinese port delays?

The delays are the result of adverse weather conditions combined with port infrastructure that has struggled to keep pace with the country’s growing appetite for crude.

Heavy Chinese crude stockpiling in the summer of last year amid depressed oil prices overwhelmed the country’s port infrastructure, leading to over 50 VLCCs idling outside Chinese ports in July 2020.

What are the costs associated with northern China delays?

The best place to start looking is the demurrage market, or the daily rate typically paid by a charterer to a shipowner for delays after laytime has expired. A 20-day delay would equate to a $625,000 demurrage bill using the Argus-assessed Atlantic basin-Asia VLCC demurrage rate of $31,250 per day. Such a bill is no small expense. It represents about a fifth of the cost of chartering a VLCC on the Brazil-China route and nearly a third the cost of chartering one on the Mideast Gulf-China route in today’s market.

Despite being commonplace and largely expected, port delays in China are a consistent drain on the finances of oil traders, costing them an estimated over $1.1mn per day, per Argus calculations.

Assuming Chinese waterborne imports are at 9mn b/d, that is equivalent to three VLCCs, three Aframaxes, and one Suezmax per day. And, if we assume that each tanker waits on average seven days to discharge at a Chinese port and all those waiting days count toward demurrage, then oil traders are paying a total of about $1.16mn per day in demurrage for crude deliveries into China.

Tanker delays can happen for any number of reasons. And as last month’s incident at the Suez Canal proved, those reasons can come seemingly out of nowhere. Others, such as the Chinese port delays, are more or less expected but no less expensive.

Other sources of delays include low water levels at the Panama Canal, high winds on Mexico’s east coast, Houston Ship Channel closures from fog, congestion at the Turkish straits, or a military flare up in the strait of Hormuz, just to name a few. The demurrage costs associated with those bottlenecks are a key component to accurately understanding the delivered cost of a barrel of oil anywhere in the world.

As the saying goes, time is money. Those market players footing ship demurrage bills certainly understand the truth of that.

5 things we learnt from the Suez Canal blockage

We welcome a special guest from Gibson Shipbrokers in this next instalment of the Weight of Freight podcast series.