Global base oil prices have extended their strong rise even as crude prices have fallen from recent highs. But the uniformity of the rise in prices in various markets has begun to falter. Supply-demand fundamentals remain strong. But they are starting to change, especially in Asia-Pacific. The closure of some arbitrage opportunities and the growing feasibility of other opportunities reflect that change.

European bright stock prices have surged unusually steeply since early February in response to tight supply and strong demand, especially in overseas markets. Export prices have risen faster than regional prices since last October. They flipped to a premium to regional prices at the end of last December. That trend has begun to reverse since second-half March. Regional bright stock prices flipped back to a premium to European export prices at the beginning of April as regional demand outpaced buying interest in overseas markets. 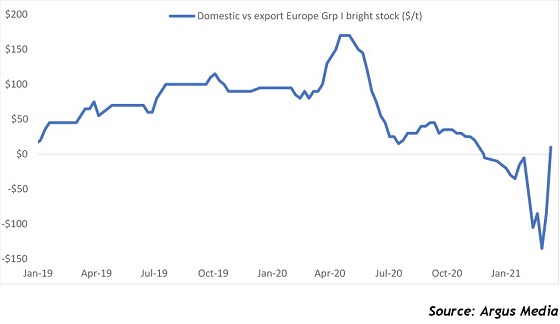 Overseas demand for bright stock and heavy neutrals remained strong. But in some markets, it was less strong than in recent weeks. Surging heavy-grade prices in China this year opened the arbitrage and attracted a growing volume of supplies to that market. Those prices have steadied in recent weeks as supply tightness began to ease and domestic base oil production rose. The gap between those steadier domestic prices and firming imported cargo prices has narrowed, making the arbitrage less attractive. 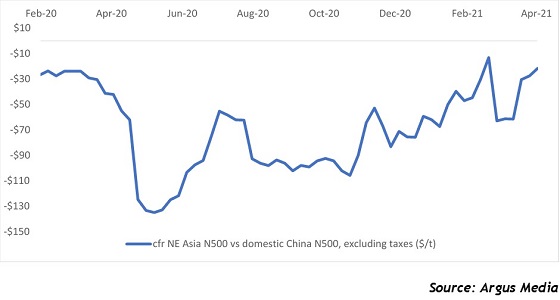 Strong demand from China and southeast Asia in recent months had slashed the flow of spot heavy-grade shipments from Asia-Pacific to India since the start of the year. Supply in India tightened sharply in response.

Steadier prices in China and southeast Asia have now made that arbitrage more feasible. Imported cfr India SN 500 cargo prices have firmed to a discount of less than $50/t to fob Asia prices. The discount improved from more than $120/t in March to its narrowest level since the start of the year.

At the same time, Indian buyers are now less willing to raise their prices so sharply to secure supplies. The trend added to the attraction of targeting Asia-Pacific supplies and complicated further the arbitrage for importing base oils of European or Russian origin. 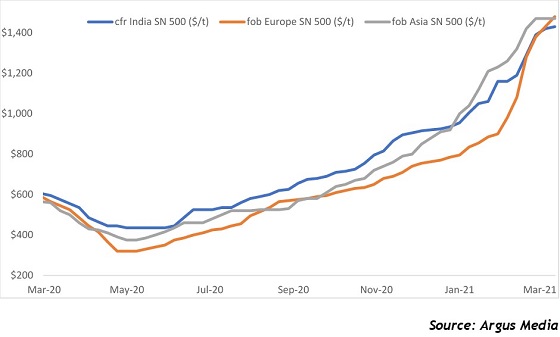 Signs of easing upward price pressure in Asia-Pacific contrasted with an ongoing surge in spot and posted prices in the US. Supply has remained unexpectedly tight as February’s cold snap in the US Gulf coast region extended or added to a heavy round of plant shutdowns. Demand has remained strong, especially in overseas markets like Latin America.

Spot prices are typically at a discount to company postings. Instead they rose to an unusual premium to company postings in March in response to increasingly tight supply. They have remained at a premium even after the latest round of posted price increases in late March and early April. 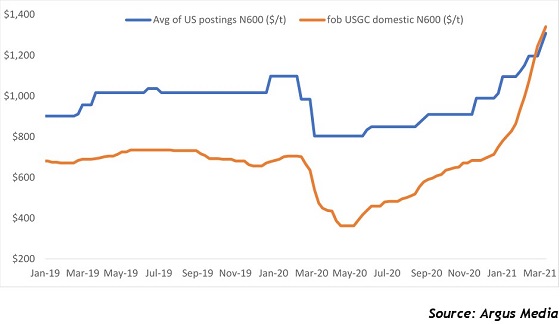 Global base oil prices have surged. Buyers have prioritised supply over price. The strategy reflects a growing awareness that availability is likely to tighten even more before it increases, and some blenders will struggle to secure sufficient supply. The subsequent pri...

Global base oil prices have extended their rise at a time of year when they typically face more downwards pressure. There is typically a rise in surplus supplies and a slowdown in demand before the end of the year. This time supplies have stayed tight. Demand has exceed...