Borrowing the nautical maxim that convoys sail at the speed of their slowest ships, a complete oil and commodity demand recovery requires more than just ongoing economic rebound in the US & China.

The IMF’s World Economic Outlook (WEO) April update upgraded its forecasts for 2021 and 2022 global GDP growth to +6% and +4.4% respectively, noting unprecedented policy responses to the Covid-19 pandemic. With the US having already signed into law a $1.9 trillion stimulus package, and with another $2 trillion infrastructure package waiting in the wings, it’s no surprise that the US has seen the lion’s share of macro-economic forecast upgrades.

However, the seemingly inexorable rise in crude and other commodity prices evident since last November has now paused for breath as broader economic reality begins to bite. Examining the divergent fiscal responses to the Covid-19 pandemic so far, plus disparities in the recent pace of vaccine roll-out and the latest GDP forecasts from the IMF, year 2021 increasingly looks like seeing a two-tiered recovery. 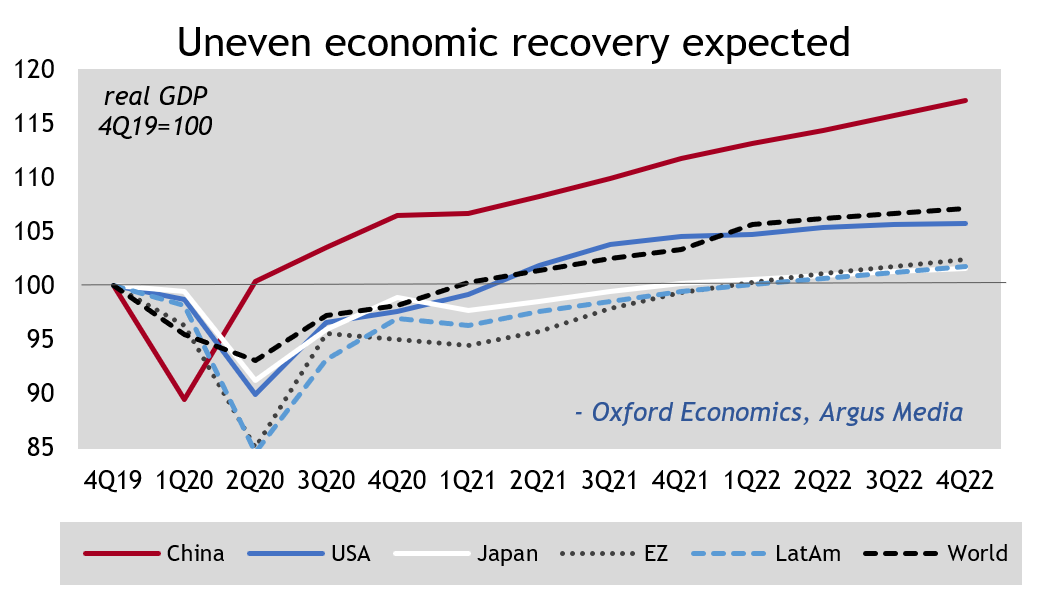 While China and the US are enjoying a rapid return to pre-crisis economic activity levels, much of Europe and the developing world face a slower rebound amid delays in finding an equilibrium between vaccinations and lockdowns.

Moreover, further headwinds for emerging markets potentially lurk if the speed of the US recovery entails a faster-than-expected rise in interest rates that worsen emerging market debt-servicing challenges. While US Fed policymakers still envisage holding interest rates near zero until 2023, recent market benchmarks imply renewed upward momentum from late-2021 and through 2022.

However, such financial market exuberance looks premature based on a simple extrapolation of recent vaccination rates. This suggest that while the US could achieve herd immunity (equivalent to 70% of the population receiving two doses of vaccine each) as early as August this year, the EU and India might have to wait another 12 to 24 months respectively to achieve the same milestone. Of course, the initial months of a complex global vaccination programme was always likely to see logistical problems and supply chain delays.

The pace of vaccination rates will hopefully accelerate in the months ahead, but the financial hit already absorbed, the multiple lockdowns already endured and the limited fiscal firepower available to poorer countries could combine to produce long-lasting impacts. 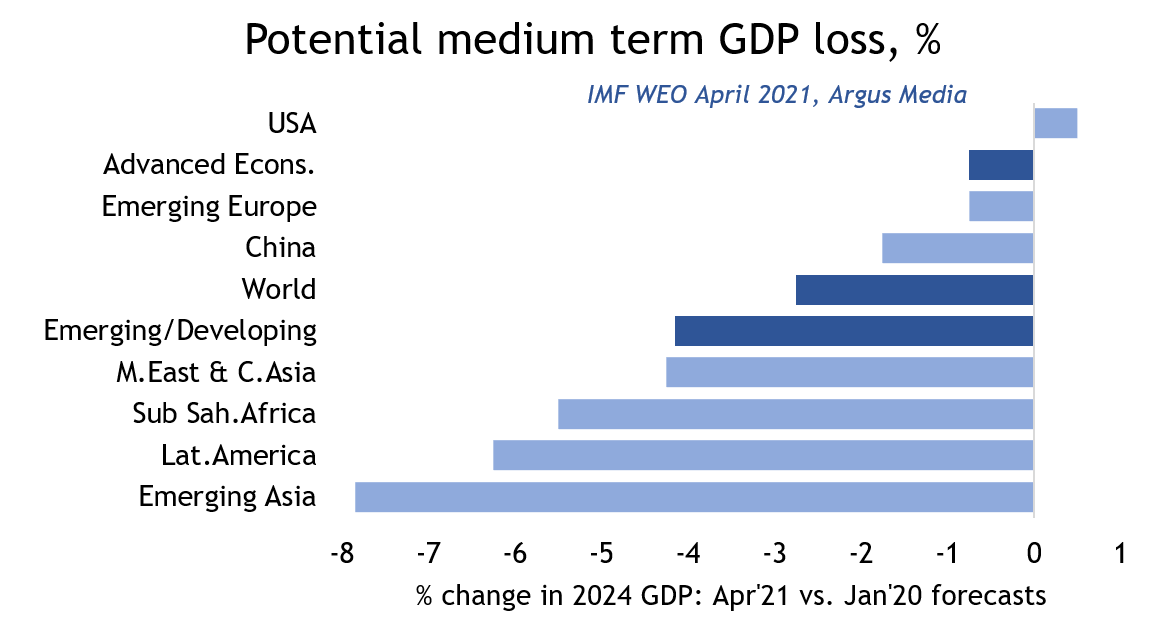 There seems little doubt that economic scarring will continue to impede economic recovery in some of the more vulnerable markets. The IMF itself calculates that 2024 GDP levels for the emerging/developing economies now look likely to be some 4% lower than was expected ahead of the pandemic last January, while in contrast the equivalent “hit” suffered by advanced economies could be less than 1%.

None of this undermines the likelihood that 2021 will prove a year of ongoing global economic recovery. A resurgent US economy, alongside impressive gains already well underway in China, should act as a “rising tide that lifts all boats”.

However, amid calls by the World Bank, IMF and others for widespread debt relief for the developing economies, and a more equitable sharing of vaccine supplies, the concept of emerging market economic scarring has become well entrenched.

Coaxing the more fragile developing market economies out of lockdown and back to health matters greatly for both oil and broader commodity demand recovery. After all, generating each incremental dollar of GDP in the emerging markets takes between two and four times as much oil and commodity consumption as it does in the most energy-efficient region – Europe. Resurgent US and Chinese industrial activity are clear and promising signs on the route to oil market rebalancing.

However, producer plans to regain market share by raising output over the next six to 12 months also hinge critically on an emerging market recovery that currently lags far behind the more headline-grabbing resurgence in the US and China.

Four months after the US election, and despite expectations that an incoming Biden Administration would prioritise an early breakthrough, resuscitation of the Joint Comprehensive Plan of Action (JCPOA) on Iran’s nuclear programme more realistically looks like a late-202...

From the Economist's Chair: A Fourth Bridge for Opec+

The Forth Bridge in Scotland was opened on the 4th of March 1890. Opec+ Ministers will hope their meeting on the same date 131 years later provides a bridge to both stronger oil demand and sustainably higher prices.

From the Economist's Chair: The pros and cons of super-cycling