Monthly data continued to give us whiplash, with a surprise jump in US crude exports to roughly 3.5mn b/d in June as a wider WTI-Brent spread opened the door for more deals. Hurricane Ida also knocked out deliveries at the Louisiana Offshore Oil Port.

Welcome back to our monthly blog: The US Crude Export Chronicles, by Senior Reporter Eunice Bridges (@eunicebridges12) and Associate Editor Amanda Hilow (@HilowMidpoint). Come back every month for Argus’ take on US crude exports and how they are faring in the uneven Covid-19 recovery.

The Louisiana Offshore Oil Port (LOOP) suspended deliveries on 28 August before Hurricane Ida crashed into the US Gulf coast. Ida made landfall in Port Fourchon, Louisiana, as a powerful Category 4 hurricane. No word yet on any damage to LOOP facilities. As a reminder, LOOP is still the only US port that can fully load very large crude carriers (VLCCs).

Monthly trade data has been a rollercoaster ride lately, and June did not disappoint. US crude exports soared by a whopping 28pc to 3.49mn b/d with India and South Korea as the top buyers.

US crude headed to China continued to lag year-earlier levels, averaging 244,000 b/d in June, down from 350,000 b/d in May. We take a closer look at the first six months of US export data below, with clear patterns emerging despite the month-to-month volatility.

Some focus shifted to medium sour exports this month as Mideast Gulf supplies were edged out of Asia-Pacific at higher selling prices. Nearly 110,000 b/d of crude departed from LOOP in June for South Korea, more than doubling month-prior volumes.

South Korea's imports of US crude already rose to the highest level in 14 months by June at roughly 379,000 b/d, according to data from South Korean state-owned oil firm KNOC. Around 220,000 b/d of that volume was Mars quality, according to Vortexa. The remaining volume comprised mostly WTI, West Texas Light (WTL) and Eagle Ford.

Two major themes emerged from crunching US crude export data for the first six months of 2021 — India took over as the top destination and Corpus Christi cemented its reign as the top port.

US crude loaded for India averaged 419,000 b/d from January-June, up by 68pc from the same period in 2020, according to Census data. If you recall, US crude exports were resilient last year, reaching a record high of 3.2mn b/d despite the demand-busting global pandemic and a string of tropical storms hitting the US Gulf coast.

The export market faced new challenges in 2021 including a narrowing Brent-WTI spread, severe winter weather in February that shut some production, and more competing supply from Opec+ countries. Not to mention the Covid-19 Delta variant renewing lockdowns around the globe. As such, US crude exports fell by about 8pc in January-June 2021, compared with the same period a year earlier, but still held near 3mn b/d.

Corpus Christi’s domination strengthened, accounting for about 53pc of US crude exports at 1.57mn b/d in January-June. This compares with 44pc of the total in the first half of 2020.

US crude exports vs WTI differential 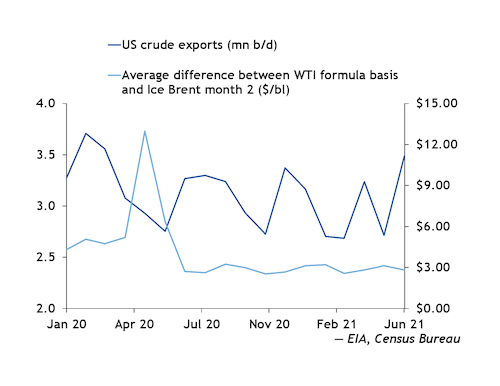 The biggest conduit out of the Bakken shale just got bigger. Energy Transfer expanded its Dakota Access crude pipeline (DAPL) by 180,000 b/d earlier this month.

That means DAPL and the connecting ETCOP line could move up to 750,000 b/d of Bakken crude from North Dakota to the Texas Gulf coast. Energy Transfer already reported a "significant increase" in August nominations for DAPL which could change crude flows in the region.

Looking ahead to next year, even more crude will be headed to water as the reversal of the 1.2mn b/d Capline crude pipeline from Patoka, Illinois, to St James, Louisiana, is on track to start service in the first quarter of 2022, Plains All American Pipeline said. The timeline for the reversal has not been affected by the cancellation of the Byhalia Connection line, which would have linked Capline to a large oil pipeline from Cushing, Oklahoma. Byhalia, which was facing strong local opposition, was cancelled earlier this year.

And in the latest legal challenge to a midstream project, two indigenous groups filed a federal lawsuit against the US government contesting a water permit for Moda Midstream's crude export terminal expansion in Texas. Moda declined to speak directly about the lawsuit but said it is confident the nearly year-and-a-half application review process was comprehensive, and the Army Corps permit was properly issued. For more on that story click here.

India is positioned to remain a prime destination for US crude as refiners there ramp up throughputs and stash crude in storage at Mangalore on relatively stable gasoline demand.

IOC utilized 96pc of its pro-rated installed capacity last month and plans to increase to full capacity by November as gasoline demand increases. Fellow state-controlled refiners Hindustan Petroleum (HPCL) and Mangalore Refinery and Petrochemicals (MRPL) plan to raise throughputs to 100pc at the same time, while Bharat Petroleum (BPCL) plans to operate both its refineries at Mumbai and Kochi at full capacity during September-October.

BCPL also agreed to buy nine cargoes of light sweet US crude for delivery over the next three months as widening discounts to Ice Brent make it a profitable purchase.

Three cargoes were expected to land by the end of August, four will be delivered in September and two will land in October.

Chinese independents will also include US crude in their final import quotas, with one refiner heard purchasing a 2mn bl cargo of Mars at a deep discount to Ice Brent this week for delivery in late November or early December.

Come back again next month for our take on how US crude is competing with an expected increase in Opec+ production, while global markets still navigate a murky Covid-19 outlook. Until then, we wish you smooth sailing in these choppy waters.