Nascent crude supply from Guyana — where production has climbed from nothing in 2019 to 120,000 b/d this year— has become one of the lone bright spots for international shipowners on the west coast of the Americas.

Guyanese crude has found homes primarily in the US and Asia, but much of that flow first stops in Panama, where traders push it through the country’s Trans Panama Pipeline (PTP) and then re-export it out of Panama’s west coast.

By using the PTP pipeline, traders avoid the Panama Canal’s potentially long wait times and limiting draft restrictions when transporting their Pacific-bound Guyana crude cargoes. Since crude output from Guyana has come online, crude tanker loadings on Panama’s west coast have increased, a noteworthy development at a time of low oil demand amid the Covid-19 pandemic. West coast Panama crude loadings hit 267,000 b/d in the first half of this year, up by 6pc from a year earlier and up by 11pc from two years earlier, according to Vortexa.

“It has not been a storm of new supply” but it has mitigated losses stemming from US sanctions on Venezuela, said one US-based shipbroker.

Ship tracking data shows that roughly 45pc of Guyanese crude loadings are transported by tanker, largely Suezmaxes, over to Panama. Argus assessments show that Suezmax rates, which are currently depressed because of a global tonnage oversupply, are $4.11/t on the Guyana-Panama route, about a third of the rate for sending crude from the Mideast Gulf to China on the same type of tanker.

Much of the gains in total west coast Panama loadings over the last two years have come from shipments into US west coast refiners.

West coast Panama-to-US west coast crude shipments reached 126,000 b/d in the first half of this year, up by 27pc compared to pre-pandemic levels in the first half of 2019, with the majority of these movements conducted on Suezmax vessels. Many of those shipments are a combination of Colombia, Ecuadorean, and Guyanese cargoes, said the shipbroker.

With the tanker market in a sustained depression, traders are saving on their ocean-going transportation expenses.

The Panama-US west coast Suezmax rate is $5.93/t, per Argus assessments. Adding that to the Guyana-Panama rate of $4.11/t shows the freight cost of getting Guyanese crude to US west coast refiners is about $10/t in the current market, excluding PTP pipeline costs. In the current robust crude market of about $65-75/bl, the tanker freight component represents only about 2pc of the price of crude. 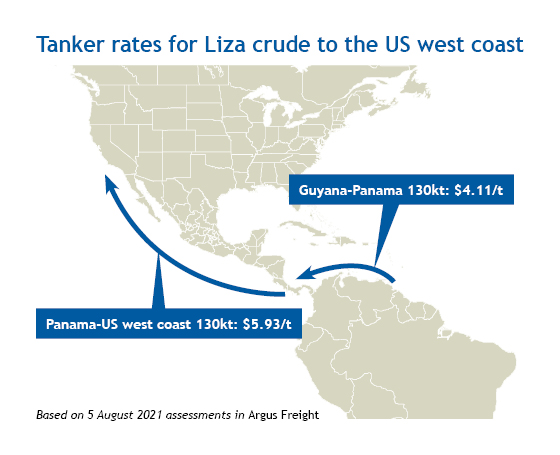 Liza has places to go and people to see

Crude produced in Guyana is called Liza, a medium sweet sitting at a 31.1°API and 0.51pc sulfur. It is comparable to multiple Latin American and African grades, meaning future Liza destinations could include anywhere those grades go.

Liza is particularly attractive to refiners seeking lower-sulfur crude, like those on the US west coast, because of its more favorable yields that satisfy unique product specifications for ultra-low sulfur diesel (ULSD), and gasoline. It’s also sought out by those with simple refining configurations, such as some smaller Chinese independent refineries. The Guyanese government this year also sold crude to India’s IOC for the first time. 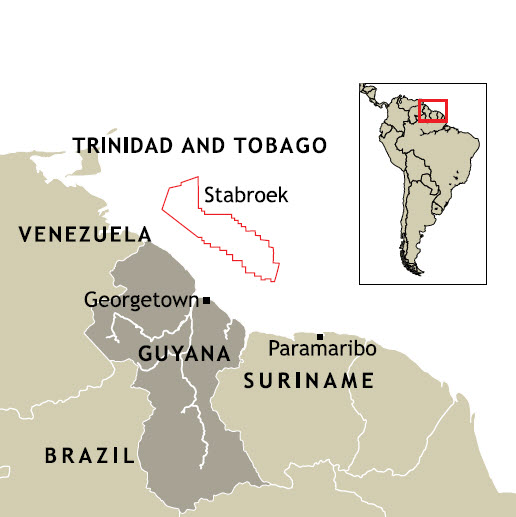 As Guyanese crude exports continue to ramp up, shipowners are likely to continue to see cargo demand off of Panama’s Pacific coast edging higher. ExxonMobil anticipates production at its Stabroek block in Guyana to surge to 800,000 b/d by 2025. Much of that additional supply would likely head to China and India, with such a production level justifying full 2mn bl very large crude carrier (VLCC) loadings. But some of that crude, particularly that which heads to US west coast refiners, will translate to an increase in loadings off of Panama’s coast.