The 300,000 b/d Trans Mountain pipeline connecting Canada’s crude hub to refineries and export hubs at the west coast was closed for three weeks starting in November as a precaution to extreme weather conditions. As a result, ANS crude demand and, therefore, prices surged.

In this episode of The Crude Report, market reporters Brett Holmes and Benjamin Peyton explain how the Trans Mountain closure has affected both the Canadian supply and the North American west coast demand pictures.

Jessica: Hello and welcome to The Crude Report, Argus' podcast series on global crude oil markets. This is Jessica Tran for Argus Media.

Today, we're going to chat about how rainfall in Canada is impacting Alaskan crude markets. Intrigued? Let's get into it.

The US West coast and western Canadian crude markets are not often talked about at the same time, but following a temporary shutdown of the Trans Mountain pipeline, a key conduit for regional refiners, it was clear the impact one has on the other.

Brett, could you maybe start by giving some background on the Trans Mountain pipeline and the impacts you both have seen?

Brett: Sure, Jessica. So, I can give a little background here. So, the 300,000 b/d Trans Mountain pipeline connecting Edmonton, Alberta to the west coast was taken offline on the 14th of November. And this was done for precautionary reasons while the province at large, British Columbia, was dealing with heavy rainfall, flooding, mudslides. So, it was so bad that small cities were flooded. People were evacuated, motorists were stranded on highways, and infrastructure had been knocked out throughout the province.

So the Trans Mountain pipeline said that an area near Hope, BC, which is a couple-of-hour-drive east of Vancouver, was concerning because a nearby high-volume natural gas pipeline had already been exposed by floodwaters. So they made the call to shut the line down to assess the situation. The pipeline serves not only the local Vancouver area but crude can also be exported via the Westridge Marine Terminal. It can also be sent to refiners in Washington state via the Puget Sound Pipeline.

While not the biggest pipeline out of Alberta, we have the 3mn b/d mainline system, which belongs to Enbridge, going eastward. This one is just a small slice of export capacity out of Canada, but it's nothing to sneeze at when this line goes down either, which, mind you, practically never happens with this latest outage being the longest in its 60-plus years of operation.

So the bottom line is that it serves a lot of people, and it even prompted the province of British Columbia to limit gasoline purchases among residents. But between the Trans Mountain pipeline, and the end-users of those refined products, are the west coast refineries, which were affected. And Ben is more in tune with what happened on that front. So, Ben, what did you see unfold after the pipeline went down?

Ben: Thanks, Brett. The temporary closure, as you mentioned, impacts the US west coast by way of the Puget Sound Pipeline. There are four Washington state refineries at Ferndale, Puget Sound, Anacortes and Cherry Point. During the roughly three weeks shutdown, demand surged for Alaskan North Slope (ANS) crude, which is primarily refined at the US West coast, we saw prompt prices rise as high as $2.35/bl over the international benchmark, Ice Brent. And for context, that was a roughly $1.50/bl increase from where the gray was trading before the shutdown.

ANS also typically trades two months prior to the delivery month, but during the shutdown, at least three trades were reported outside of that named delivery month. Alaskan North Slope crude is also lighter and sweeter than the average cargo delivered by the Trans Mountain pipeline, but it still competes for US West coast demand with Canadian grades.

The most recent data from the US Energy Information Administration indicates that Canadian crude oil imports at Washington in September and October average of sulfur content of around 1.5% and an average API gravity of 29.96°. Washington state refiners also took roughly 244,000 b/d of Canadian crude in September, from 236,000 b/d in the month prior.

So while ANS was a bit higher, there were also impacts that we saw on the Canadian crude market. Right, Brett?

Brett: That's right, Ben. So let me set the stage a little bit more. So, back in Alberta, crude inventory levels were already on the rise before this outage happened. So, they were steadily climbing since the fourth quarter of 2020. And they kept rising and ultimately reached record levels in October of this year. So, this comes despite the arrival of Enbridge's 760,000 b/d Line 3 replacement project, which effectively added three new 70,000 b/d of new export capacity out of Canada.

So, what's causing high inventories? Well, if takeaway capacity is actually turning higher, we look at the supply side. So, crude output in Alberta hit a record high of 3.8mn b/d in October. That was boosted by robust production out of the oil sands region, primarily. And what's more, the second and third largest oil sands producers have committed to even greater output in 2022, bumping up forecasts and increasing capital spending programs year over year. So those two companies are Cenovus and Suncor. 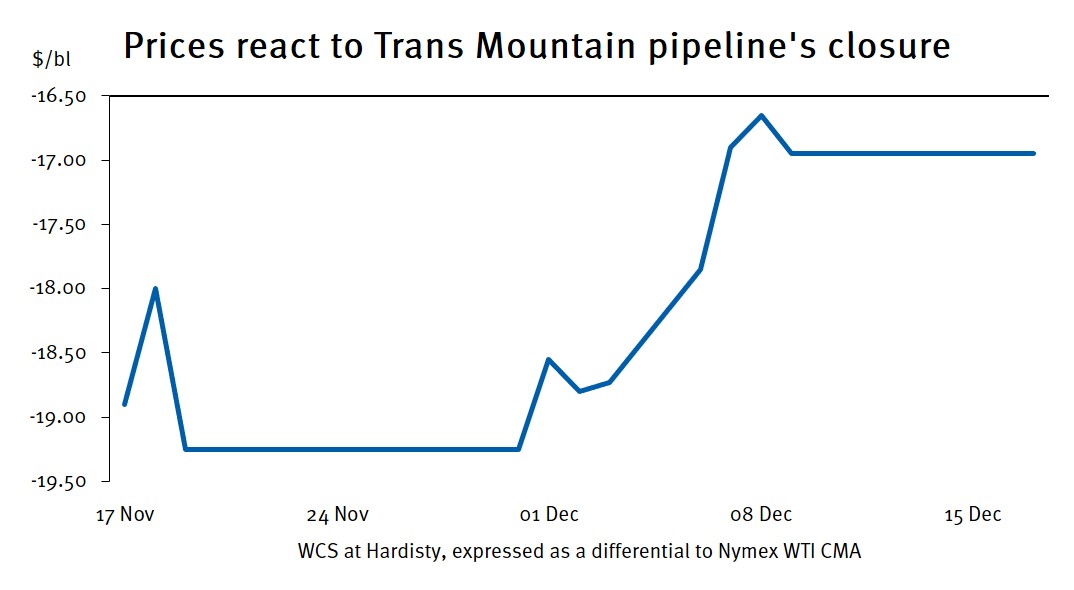 So, getting back to Trans Mountain, an upset like this does have a bearing on the market. With the option to ship on that line being taken off the table, local heavy crude prices were under pressure. The heavy sour benchmark in Hardisty dipped to nearly a $20/bl discount to the basis, but it has since found support with the return of the line and other market conditions. Despite that support, it's still weaker than the differentials we saw as recently as October. Western Canadian Select (WCS), which is the heavy sour benchmark in Hardisty, Alberta, for January delivery ended the latest trade window at around a $16/bl discount to the basis.

So, what we're seeing is a return in price support with the pipeline restarted on December 5th, but that pipeline has yet to ramp-up to full capacity. So, it could be a little while before we even see greater price support, and that could take another month as the operator continues to assess the line.

So, the Burnaby refinery is not yet at full rates either, understandably, as that will take time too. It'll likely want to restore stockpiles at its facility. So a bit of a different story on the Canadian side with the return of the pipeline, things looking a little bit more back to normal. It's still not quite there yet from what we were seeing just prior to the outage. But then, I gathered, you're also seeing some normalcy return to the market on the US West coast.

Separately, the first cargo of ANS to be loaded for export since August departed Alaska on 12th of December, indicating demand for prompt supply at the US West coast could be easing amid increased flows of Canadian crude to the region. At least nine cargoes, or nearly 24,000 b/d, of the domestic medium sour was loaded for export to Asia-Pacific countries of Japan, China, Singapore, or South Korea so far this year. And for context, all US West coast refinery demand for ANS is roughly 341,000 b/d as of September, which is the latest monthly data available. But again, both ANS and Canadian crude compete with imports at the US West coast as well. And ANS, for February delivery, which is the prompt month, currently, for we are assessing, has averaged at roughly $2.50/bl premium to competing Arab Light at the US West coast, which could support increased Middle East supply to the region.

Opec+ imports at the US West coast rose to roughly 423,000 b/d in the first eight months of this year, from 390,000 b/d over the same period last year. And that's when we saw ANS prices falling to a discount to competing grades.

Jessica: Thanks so much for your insight on this, Brett and Ben. If you're in need of more in-depth daily coverage of US and Canadian crude oil markets, consider subscribing to Argus Americas Crude. You can find more information on the service at www.argusmedia.com.

And before we sign off for this episode, we and our guests would like to wish our listeners a happy holiday and best wishes into the new year. Thanks for tuning in, and we look forward to you joining us on the next episode of The Crude Report.

In with WTI Midland, and out with Brent and Forties – this is BP’s prescription for the future of the Dated Brent benchmark. But is the market ready for Brent-free Brent? Opinions remain sharply divided.

Between SPR releases and Omicron, uncertainty was the underlying theme of last week’s monthly Opec+ meeting. And although they sanctioned another 400,000-b/d increase to their production quota in January, Opec+ ministers signaled they’d be watching developments closely ...

The Crude Report: Pipeline capacity goes from famine to feast

What began as a frenzy to build crude oil pipelines connecting US oil fields like the Permian basin to ports for export has resulted in more pipeline capacity than the crude to fill it.