Europe is divided over how best to reach carbon neutrality, with the role of nuclear to achieve net zero targets a highly divisive issue. But it could come to a head in the next few weeks when the EU outlines the rules for its green finance taxonomy.

For some EU countries, including Germany, nuclear power carries too great a safety risk and must be excluded from the EU’s taxonomy, with costs, the feasibility of new plants and waste all causing serious angst.

But a group of 10 EU countries, with France among them, has urged the commission to recognise nuclear as a low-carbon energy source, claiming that it offers Europeans “their best weapon to decarbonise our economy”.

The taxonomy — a classification granted to environmentally sustainable economic activities that makes them eligible for financial support — could have wider repercussions. Regulators in the UK and US will follow developments closely with their own classification systems in mind, while the new scheme could attract billions of euros in private financing.

The EU is expected to grant some nuclear projects the green label on a temporary basis until 2030, signalling a recognition that nuclear power could offer an imperfect but necessary solution to the much bigger problem of global warming.

More renewables no alternative to nuclear

As a source of base-load electricity, nuclear power can take the place of fossil fuels in a country’s energy mix in a way that renewables cannot.

To date, only hydroelectric generation can directly substitute nuclear power and provide low-carbon energy on demand. Hydrogen, and potentially biogas, may eventually play this role but the two sectors are still in their infancy.

And while the switch to gas from coal helps cut emissions, gas-fired power plants are still heavy emitters, with methane leakage a large contributor to climate change.

Countries that have turned their backs on nuclear and coal have had to lean on gas in the medium term. A key example is Germany, which decided to close eight nuclear plants in 2011 in the wake of the Fukushima disaster and aims to phase out its nuclear fleet by 2022. This has left its power mix reliant on fossil fuels during windless, cloudy weather even as its renewable capacity has increased.

Belgium too will draw a line on nuclear generation in 2025 and already plans to increase gas-fired output to make up for the lost capacity.

But perhaps most importantly, for countries that are still heavily reliant on coal — such as Poland, Estonia and the Czech Republic — a green label for nuclear would allow for investment in a technology that can directly substitute the fossil fuel in the energy mix.

Lessons from the energy price spike

The recent surge in European energy prices has highlighted Europe’s politically sensitive dependence on Russian gas. But it has also shown the necessity for a diverse energy mix that goes beyond wind and photovoltaic solar generation.

Energy systems need to be able to sustain several consecutive weeks without wind, something that batteries or the intelligent management of hydroelectric stocks are currently unable to achieve alone. Moreover, electricity demand is expected to rise sharply in the coming decades, with electric vehicles to become increasingly widespread. 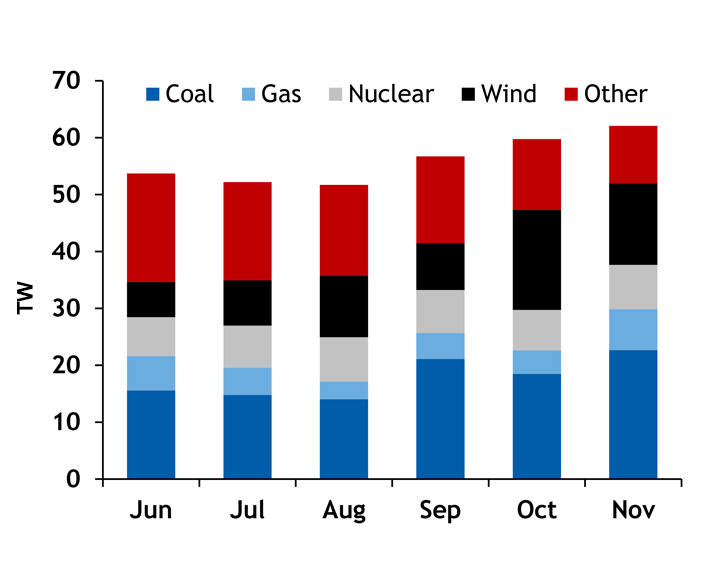 Not perfect, but necessary

Nuclear power is certainly not without its problems. New generation nuclear reactors are all well behind schedule and over budget.

Radioactive waste is also of serious concern, with critics questioning the EU’s joint research centre report that found no evidence that nuclear power is more harmful to human health or the environment than other electricity sources.

But in order to achieve its decarbonisation goals, the EU may have to live with nuclear in the mix, even if it is an imperfect solution.

From breaking news to discerning market insight and concise data charts, the Argus European Electricity service has your daily service to the electricity markets in Europe covered.

CCS and blue hydrogen – how are regulators and markets positioning themselves?