Power prices have been on a wild ride since the UK left the EU’s internal energy market (IEM). Last week the N2EX day-ahead auction, which matches supply and demand hourly for the following day, reached an all-time high of £1,000/MWh for 5pm on Wednesday. This week it has gone to £1,500/MWh twice. 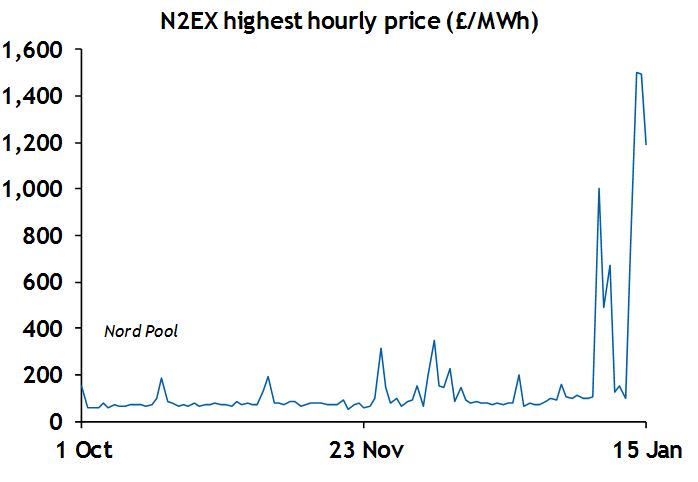 It is important to note that Brexit is not at all the main cause of this. There is a simple fundamental reason for prices to be high: a lot of capacity is off line. Two of the UK’s eight nuclear plants are off line on long-term outages, while one unit of another plant has been off line since September. An interconnector with the Netherlands tripped in December, and three gas-fired power plants have been mothballed by the administrators of Calon Energy. On top of this there are some more typical short-term outages at other gas and coal-fired plants.

With all this conventional capacity off line, the market is vulnerable to price spikes if cold weather boosts demand or if still weather reduces wind generation, both of which have happened in the past two weeks.

National Grid has issued three electricity margin notices and one capacity market notice so far this month. This is exceptional — it is not unusual for it to go an entire winter without issuing one. There are slightly different criteria for issuing either notice, but they both point to a similar issue – supply margins are uncomfortably low.

But Brexit is also contributing somewhat to the spikes, and the inefficiencies it creates are leading to further trading opportunities.

The UK has left the EU’s internal energy market, meaning it no longer participates in market coupling.

Day-ahead auctions across coupled countries occur at the same time, and the algorithm that matches supply and demand also automatically allocates power flows between the markets.

But now the UK auctions run before continental Europe, and flows must be allocated explicitly. To import power from, say, France, traders now have to purchase day-ahead capacity on the French interconnector in a separate auction, and hope that the spread between the markets is greater than the price paid for the capacity.

The end of coupling also means the end of shared order books between N2EX and the smaller Epex Spot auction, giving the UK two separate day-ahead power auctions with different prices. Prices have diverged wildly, most notably for 13 January when the N2EX price for 5pm of £1,500/MWh was £500/MWh higher than the Epex Spot price. In the IEM, these prices would have converged somewhere in between, skimming some of the peak off the N2EX.

And prices in the UK market — which excludes Northern Ireland — would certainly have been lower if it was still coupled with the Irish all-island market. The Irish day-ahead market has been around £21.50/MWh below the N2EX this month, which would have spurred Ireland-GB power flows and weighed on N2EX prices. The Irish market, which is usually far more volatile than the N2EX, has peaked at just €500/MWh so far this month.

For now, there is no day-ahead allocation of power flows at all between Ireland and Great Britain. Flows can still be allocated in the intra-day markets, but these markets have much lower volumes, so the interconnectors are being used inefficiently.

The price spikes are causing big moves in the forward market. February reached an all-time high for a front month on Tuesday. 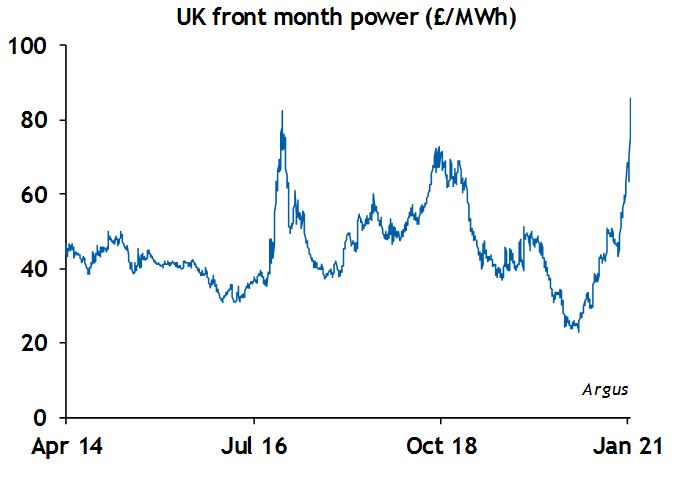 And February clean spark spreads — the profit margins for gas burn – have risen too as the market prices in the risk of further scarcity pricing next month.

But clean spark spreads further out have been little changed, as the market expects a return to normal when some of the capacity that is currently off line returns. 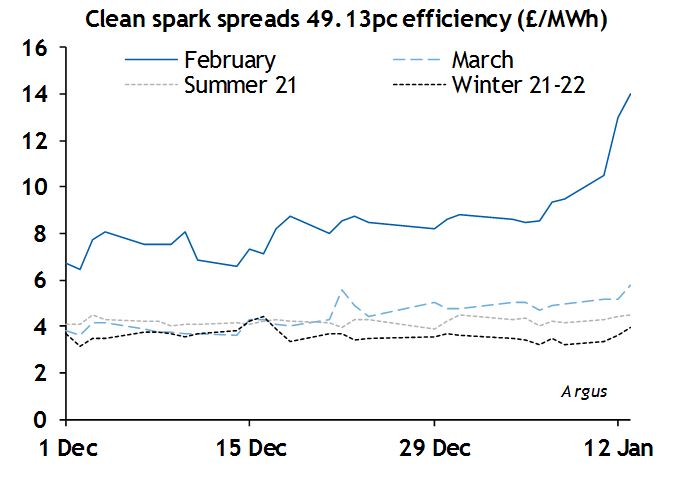 Nordic prompt power prices have fallen to record lows this summer, delivering significantly below those seen over the past 14 years. But when will prices “normalise”? It’s unlikely to be by this winter.

Concerns over a potential supply-demand imbalance in France in the fourth quarter have pushed the physically delivered contract to an unusual premium to the financially settled derivative.