The dawn of a new year may bring renewed interest in US crude exports, particularly as one of the top international producers prepares to voluntarily cut output. There’s also a new president in the White House, which of course will bring new regulations, but how will it impact new infrastructure?

The dawn of a new year may bring renewed interest in US crude exports, particularly as key international producer Saudi Arabia prepares to voluntarily cut crude production beyond its agreed curtailment figure in the latest Opec+ agreement.

State-controlled Saudi Aramco cut its February term crude allocations for buyers in Asia-Pacific by 5pc-15pc, which could spur regional refiners to compensate for the reduced volumes by turning to the US.

India has emerged as a key destination for cargoes departing the US Gulf coast as it ramps up refinery utilization rates nationally and turns to the US to meet its import slate needs. The country’s largest state-controlled refiner, IOC, once again expanded its list of eligible import options to include US domestic sweet (DSW) blend for the first time since June of last year, when the refiner issued a term tender to buy up to 12mn bl of US crude in both the fourth quarter of 2020 and the first quarter of 2021.

IOC has recently also been purchasing heavy sour Canadian grades like Western Canadian Select (WCS) from the US Gulf coast as well to take advantage of improving arbitrage economics as pipeline and rail flows from Canada surge to the US Gulf coast. 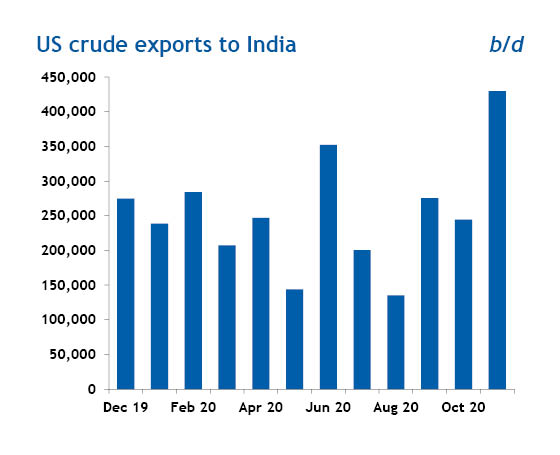 For reasons noted above, India toppled China’s six-month reign as the top destination for US crude in November. India took about 430,000 b/d of US crude that month, including 85,000 b/d of heavier grades, according to the latest Census trade data. Meanwhile, China’s intake plummeted by half to about 340,000 b/d in November, compared with the previous month.

Overall US crude exports averaged 2.73mn b/d in November, down by about 6pc from October. We are anxiously awaiting the next US Census monthly trade data dump on 5 February which will include December and give us a full picture of 2020, aka the year of Covid-19.

When US president Joe Biden cancelled the cross-border permit for the Keystone XL crude pipeline within hours of his inauguration last week, it sent a clear signal that midstream companies are in a different world when it comes to building large projects.

But some bullish sentiment lingers with the promise of growing US exports regardless of who is in the White House.

Enterprise Products is hoping federal regulators approve its planned offshore crude export terminal in the third quarter, co-chief executive Jim Teague said in an interview with Argus. The US Maritime Administration is reviewing Enterprise's application for the Sea Port Oil Terminal (SPOT) off the coast of Freeport, Texas, which will be able to fully load VLCCs. Canadian pipeline company Enbridge – a partner with Enterprise on the 950,000 b/d Seaway pipeline – also has an option to buy into SPOT.

"We feel very, very good about the outlook around that," said senior vice president of corporate development Phil Anderson. “And we expect this year to see both a permit and likely us firming up our position in that opportunity. "Enbridge also expects to reach a decision this year on building a 15mn bl Texas crude terminal to support exports and local refinery demand," he said.

Both Teague and Anderson will be speaking at the Argus Crude Live virtual conference this week. For more details, click here.

Meanwhile, Enterprise is now working with Magellan Midstream to jointly develop a WTI crude futures contract for physical delivery in the Houston area, though many of the details are still being worked out.  In the meantime, we have our eye on US-China relations after former president Donald Trump tightened restrictions on investing in Chinese state-owned CNOOC and other “military-linked” companies as one of his final moves before Biden’s inauguration this month.

We’ll be watching how the market reacts to the new US administration and, of course, the latest round of Covid-19 outbreaks and related shut downs. In the meantime, we wish you smooth sailing in these choppy waters.