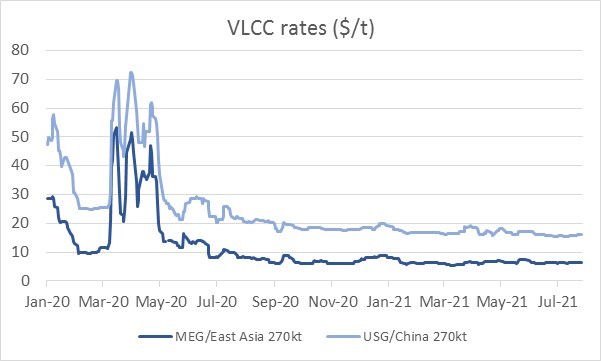 A rollover of July’s production constraints into August could have weighed on tanker demand, while also maintaining the upwards pressure on crude and bunker fuel prices. The latter have a direct impact on the earnings of shipowners, which can struggle to cover high fuel costs in the weak freight market.

But will the extra barrels, especially from the Middle East, become the force that lifts the VLCC market off its knees and sets it on the path to long-term recovery?

As magic bullets are a rare occurrence in complex markets, the answer might not be that simple.

The agreement, and why it is good for tankers

With a nod to all the caveats about successful vaccination programmes and the possible emergence of new coronavirus variants, economic recovery will mean the world needs more crude.

The crude market is, to all intents and purposes, back in balance after the supply glut that emerged in spring 2020. OECD stocks are back to the five-year norm, and increasingly backwardated crude curves demonstrate tight supply.

In this environment, it was logical for the Opec+ group — which worked effectively to mitigate the collapse in global demand in the first half of 2020 — to agree a short-term output hike. It will increase its collective production quota by 400,000 b/d each month until the end of the year, meaning a 2mn b/d increase in production by December this year.

There will be further steady increases during 2022, with the intention of fully unwinding the cuts by next September. These further production increases have the potential to push OECD stocks back into surplus, and the agreement includes a mechanism to freeze output for three months if needed. The deal also includes adjusted production baselines for some key members, to start from May 2022.

The reasons why tanker owners, especially in the VLCC sector, are excited about this in the short term are quite straightforward.

Around 78pc of global VLCC loadings were carried out in Opec+ countries in the past two years, and over half of Opec+ seaborne exports are on VLCCs, according to data from oil analytics firm Vortexa. So higher production is likely to mean more vessel demand — purely through the higher volume of crude hitting the water.

Crude prices also fell following the Opec+ agreement, and remain lower than in the week before the deal despite bouncing back in the second half of last week. Lower crude prices, or at least less support for them, could reduce the upwards push on bunker prices, granting shipowners some breathing space in terms of managing voyage costs for their fleets.

But look more closely at this positive picture, and some cracks begin to appear.

It is important to remember that volume is not the only factor when it comes to shipping demand. The other important element is distance. Multiply one by the other and you get the true representation of tanker demand, referred to as ‘tonne-miles’ (tmi).

A large proportion of Opec+ supply comes from the Mideast Gulf, which is relatively close in global terms to the major Asian demand centres, where a large majority of the world’s VLCC journeys end. So a lot of the additional barrels pushed out by the Opec+ agreement are likely to be shipped along some of the shortest VLCC routes — from the Mideast Gulf to India and east Asia.

Rising exports from the US and Brazil have the potential to create far more VLCC tonne-miles because of the distance between the US Gulf and east Asia. But there is no sign yet of volumes on these routes increasing meaningfully.

For example, US producers have adopted a ‘value over volume’ mantra that has kept shale production subdued during the pandemic. Fears over new Covid restrictions stunting demand growth, President Biden’s new energy policies and a lack of readily available finance appear to have spooked shale operators. And many have hedged a significant proportion of 2021 output, locking it in well below current prices, hindering significant production growth until their positions end.

Higher crude demand and prices could spur more activity, although the potential for the unwinding of Opec+ cuts — if it goes ahead as planned — to eventually lead to a renewed supply glut and lower prices could also stymie shale oil growth all over again.

Once global demand stabilises — and with future growth expected to be driven by Asia — trade on these longer-haul routes should support the VLCC market. But until then, the impact of higher Opec+ production on VLCC rates could be limited.

According to Vortexa data, the five largest receivers of VLCC cargoes in the past year were — in order — China, India, Japan, South Korea and Taiwan. Together these five countries received more than 83pc of the crude delivered on VLCCs globally during that period.

In bare numbers, Opec+ production is scheduled to increase by 2mn b/d by the end of this year. About 58pc of Opec+ exports are carried in VLCCs. Even assuming that all the increase in production was exported by sea, this would suggest a little over 1mn b/d more crude for VLCCs. That is roughly one VLCC every two days across the whole of the Opec+ group.

The vast majority — 87pc in the past 12 months — of Opec+ VLCC exports are shipped from the Mideast Gulf or west Africa to the Indian subcontinent or Asia-Pacific. A simplified calculation based on these factors suggests that demand for VLCCs could increase by 20bn-30bn tmi/month on those routes if an additional 1mn b/d were loaded from Opec+ countries, with possibly a little extra if higher US refinery operating rates led to more Mideast Gulf to US crude trade.

Now compare this with the fall in VLCC demand since the pandemic. 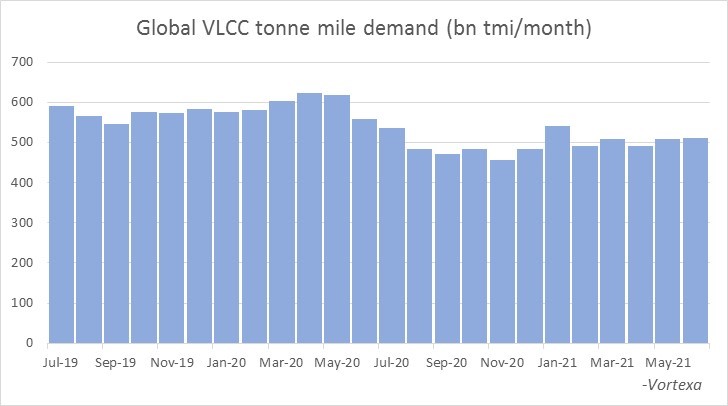 VLCC demand averaged 572bn tmi/month globally in the second half of 2019, according to Vortexa data, but this had dropped to 509bn tmi/month in January-June 2021, which is a much larger decline than even a 30bn tmi/month demand injection could solve.

The Opec+ agreement continues into 2022, and this figure should grow, as long as global demand continues to recover and allows the cuts to continue being unwound. But it seems likely that it will be some time before higher Opec+ production alone offsets the reduction in tonne-miles since 2019.

The largest non-Opec+ producers — the US, Brazil and North Sea countries — are mostly further from Asia than the majority of Opec+ members, meaning more tonne-miles for VLCCs if exports from those countries to Asia were to increase. 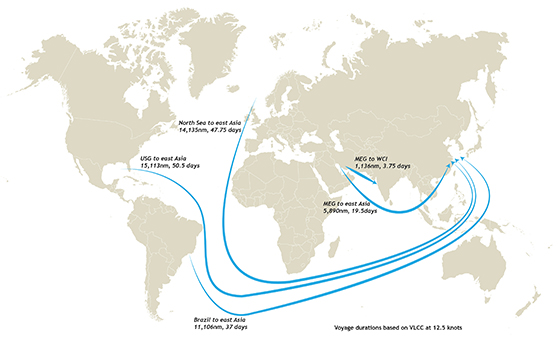 The potential impact of higher long-haul demand could be substantial. A VLCC making a round trip between the North Sea or US Gulf coast and northeast Asia would be out of the market for roughly 2.5 times as long as one sailing between the Middle East and China.

But investment in boosting upstream production is likely to come when participants are confident that crude prices have stabilised at a high enough level. The latest Opec report forecasts non-Opec upstream investment at $348bn in 2022, slightly above 2020-21 levels, but less than half that of 2013.

In addition to subdued US shale production, Brazil’s 2021 crude production is expected to be roughly in line with 2020, with both years slightly down on 2019.

There is substantial Brazilian capacity investment in the pipeline that should increase exports, including some scheduled to come into operation by 2025. But the largest increases are not expected until.

And, despite recent Chinese demand for Forties and Johan Sverdrup crude, North Sea exports still only account for a small proportion of the overall VLCC market.

What’s next for VLCCs?

So will VLCC rates improve with the Opec+ boost in production? Very likely, but it may not last.

Higher Opec+ production will boost shipping demand, but mainly on shorter routes. A spike in overall VLCC freight is quite a strong possibility, and this is something that could be supported by improved sentiment among shipowners. But higher trade on long-haul routes would have a much larger impact on tonne-miles, and this is only likely once global demand has stabilised and Asia-Pacific starts to drive growth again.

Even a return to 2019 demand levels would be unlikely to buoy rates to any great extent. The VLCC market was already considered to be under pressure in December 2019 because of tonnage oversupply. And the fleet has only grown since then — by 52 ships, or 6.5pc in 2020 and 2021 — according to data from shipbroker Affinity. There are signs of a slowdown in fleet growth, but this might not make a difference for some time yet.

For now, crude demand would have to grow further — to a level high enough to encourage more production from outside the Opec+ group and more long-distance trips. Until then, the volatility in freight might be exciting, but is unlikely to be enduring.