Global base oil prices were mixed. Prices in Europe and Asia-Pacific have fallen as supply tightness eased and demand slowed. US prices have extended their gains in response to supply tightness and strong demand. Buyers in Latin America have struggled to cover requirements given supply tightness in the US. The disconnect has prompted growing interest from suppliers in other markets to move shipments to Latin America.

European Group I base oil prices have fallen as supply picked up. A heavy round of plant maintenance in the first half of the year has come to an end. Supplies of Russian origin are also increasingly plentiful.

A seasonal slowdown in demand during the third quarter and market concern about exposure to a price correction have curbed buying interest.

European export prices for Group I SN 500 and bright stock have fallen to their lowest since April. 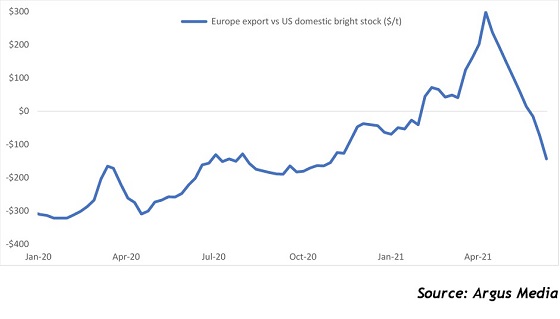 The price weakness has extended to Iranian base oil supplies in the Mideast Gulf. The lower prices for cargoes of SN 500 from that source have opened arbitrage opportunities to a growing number of markets.

Cargoes have been lined up to move to markets such as Asia-Pacific, east Mediterranean, and Africa. The shipments have allowed sellers to lock in prices that have fallen sharply versus feedstock prices in recent weeks. But they remained unusually high relative to those feedstock prices. 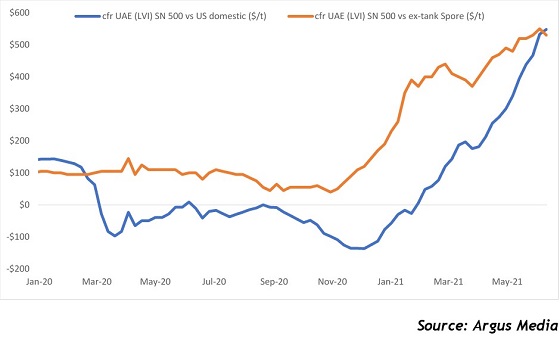 Asia-Pacific Group I base oil prices have also fallen as supply tightness has eased. Plant maintenance has ended. Additional cargoes from Mideast Gulf are moving to the region.

Even Group I supplies from China have added to volumes in southeast Asia. The trend reflected the wide disconnect between domestic Group I heavy-neutrals prices in China and fob Asia SN 500 cargo prices. The price gap has been wide enough to cover additional costs such as taxes in China.

Chinese base oil exports are typically less than 3,000 t/month. They rose in May to a four-year high of almost 10,000t. Some 3,400t of that volume moved to Singapore. 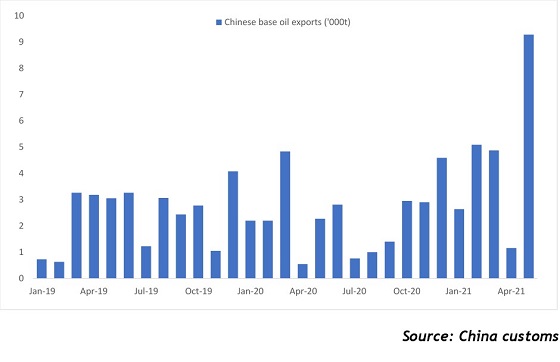 The price weakness in a growing number of markets has boosted the attraction of moving more surplus shipments to the US and Latin America. The discount of fob Asia Group II light grades to US domestic prices has increased to its widest in at least eight years.

That price discount has so far remained unusually wide for more than three months. The widening discount highlights the persistent shortage of supplies in US and Latin America, even with these supplemental shipments from other markets.

That trend is likely to continue at least for several more months. US producers are focusing on filling back orders for domestic and overseas term buyers and on building continency stocks during the Atlantic hurricane season. Shipments had faced delays following unexpected production problems caused by the Arctic storm in February and then a raft of logistical issues.

US base oil exports to Belgium slumped in April to a nine-month low. They  rebounded in May, reflecting the focus on covering term commitments.

US exports to Europe recover 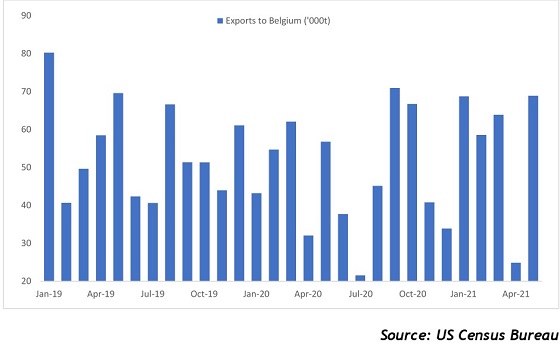 Global base oils market snapshot – Week of 3 May

Global base oil prices have extended their gains to unusually high levels as demand continued to outpace supply. Prices in Asia-Pacific have risen at a slower pace than in Europe and US in recent weeks. The trend has created arbitrage opportunities to move supplies from...