Welcome back to our monthly blog: The US Crude Export Chronicles, by senior reporter Eunice Bridges (@eunicebridges12) and associate editor Amanda Hilow (@HilowMidpoint). Come back every month for Argus’ take on US crude exports and how they are faring in the Covid-19 recovery.
Hot topics

Just when we thought US crude exports were losing steam, here comes the official US April trade data. And talk about a bounce back — crude exports jumped a whopping 24pc to 3.24mn b/d, the highest monthly total this year.

The Netherlands earned the title of top buyer in April with 425,000 b/d, more than doubling from the previous month. US crude exports to the Netherlands averaged about 300,000 b/d in the first four months of this year, slightly higher than the 2020 average. As a reminder, overall US crude exports were resilient last year, averaging a record 3.2mn b/d despite the disaster combo of Covid-19 and a slew of tropical storms in the Gulf of Mexico.

Higher demand in both domestic and global markets for transportation fuels like gasoline ahead of driving season is pushing up the value of waterborne light sweet crude as US and European refineries ramp up throughputs.

The free-on-board (fob) price of WTI at the US Gulf coast has been trending higher against the international benchmark Ice Brent, with WTI fob Houston more than halving its discount to Ice Brent month-on-month. WTI fob Houston even touched an 18-month high on 11 June at a 48¢/bl discount to September Ice Brent as it follows strength in the domestic pipeline market. That’s pre-pandemic levels. 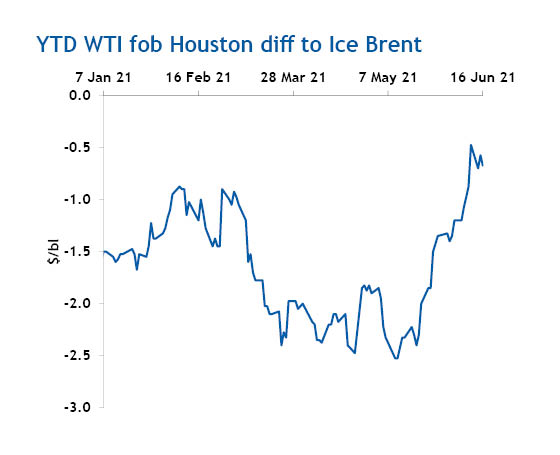 India jumped to the number two spot among takers of US crude, according to the latest monthly trade data. About 370,000 b/d of US crude headed to India in April. But that total is down sharply from the record 560,000 b/d sent to India in December.

India has struggled with a devastating outbreak of Covid-19 this year but the outlook is improving in recent weeks as cases are falling, and some stringent lockdown measures are being lifted. The country's diesel and gasoline consumption rebounded in the first half of June by 12pc and 13pc, respectively, compared with the same period last month.
Meanwhile, US crude headed to China averaged 202,000 b/d in April, the lowest in a year.

A long-delayed, multi-billion-dollar pipeline project met its end this month.

TC Energy officially pulled the plug on its 830,000 b/d Keystone XL crude pipeline project – terminating a plan to move a lot more crude from western Canada to the US midcontinent and Gulf coast.

Construction on the $8bn Keystone XL was suspended earlier this year after US president Joe Biden rescinded a key cross-border permit, citing concerns about climate change.

The line would have moved crude from Hardisty, Alberta, to Steele City, Nebraska, where it would have connected with other TC Energy pipelines to Cushing, Oklahoma, and the southeast Texas coast.

Light sweet crude prices are expected to remain strong near-term amid growing global demand, which would offset increases in Opec+ production.
Trade firm Vitol expects oil benchmark prices to remain in the $70-80/bl range for the remainder of 2021, with some room for further growth, and expects demand to return to pre-pandemic levels during the second half of 2022.

Trafigura has a more bullish expectation of $100/bl before demand peaks, while US bank Goldman Sachs expects benchmark prices to average $80/bl in the third quarter but couldn’t predict value any further out than that because of supply uncertainties.

The Opec+ Joint Ministerial Monitoring Committee (JMMC) will next convene on 30 June, and Opec+ ministers on 1 July. Will the group stick with its plan to raise the ceiling on production? The plan included boosting collective output by 350,000 b/d in May, 350,000 b/d this month and 441,000 b/d in July. Saudi Arabia will gradually unwind its additional 1mn b/d voluntary output cut over the same period.

Any change to the plan has serious implications for US crude exports, and we’ll be watching to see how it plays out.
Until then, we wish you smooth sailing in the next stages of the global recovery from Covid-19.