As US refinery capacity growth stagnates, Asia-Pacific refiners are slowly but surely stepping into the void to meet recovering gasoline and diesel demand on Latin America’s west coast.

Since 2016, diesel and gasoline imports to Chile, Peru, Ecuador, El Salvador, and the west coasts of Mexico, Colombia, Guatemala, and Panama have risen by 4pc to 568,000 b/d, according to Vortexa, even with the Covid-19 outbreak continuing to weigh on oil demand in the region this year.

US Gulf refiners meet most of the region’s base demand. But the Asia-Pacific refiners have filled in for demand growth with exports of 72,000 b/d in 2021, up from 37,000 b/d in 2016. During the same time, the Asia-Pacific market’s share of total diesel and gasoline shipments into west coast Latin America has risen to 13pc from 7pc.

Low freight rates throughout 2021 have widened the arbitrage to ship clean oil products on long-haul routes, such as from Asia to the Americas. The South Korea-US west coast medium range (MR) tanker rate, a decent proxy for Asia-west coast Latin America freight costs, has averaged $27.51/t so far this year, down by 22pc compared to the same period in 2019 prior to the Covid-19 outbreak, according to Argus assessments. Rates for the South Korea-Chile route are higher, are trading at about an $18/t premium to the South Korea-US west coast route because of the longer voyage.

China’s diesel and gasoline exports have been supported by rising refining capacity in the region, such as Rongsheng's ZPC refinery, which began bringing its 400,000 b/d second phase on stream last November, taking its total capacity to 800,000 b/d and making it China's largest single refinery. The country’s refinery runs rose to as high as 14.5mn b/d in November 2020, up from 11mn b/d in January 2017, according to the US Energy Information Administration (EIA). Meanwhile, since 2017, China’s diesel and gasoline exports have grown by 63pc to 863,000 b/d since 2017, according to Vortexa.

Chinese refining capacity is expected to continue growing to 20mn b/d by 2025, up from roughly 17.5mn b/d in 2019, according the country's biggest refiner state-controlled Sinopec.

While a lack of refinery expansion in the US may be playing a role in lowering its share of the west coast Latin America market, disruptions in US supply have also helped open the door to alternate suppliers into the region.

In February 2021, power outages in Texas following an unexpected cold snap there cut US Gulf coast refinery utilization in half, bringing it down to 41pc on the week ending 26 February, the lowest level in at least ten years. Furthermore, Asian refinery throughputs rebounded more quickly from the pandemic than did US throughputs in line with the region’s swifter broader economic recovery. This helped allow for more Asian gasoline and diesel to be available for export to west coast Latin America.

And going forward, refining capacity in the US west coast will keep falling because of the conversions of refineries in the region into renewable fuel production sites, which have largely been driven by state and federal incentives. 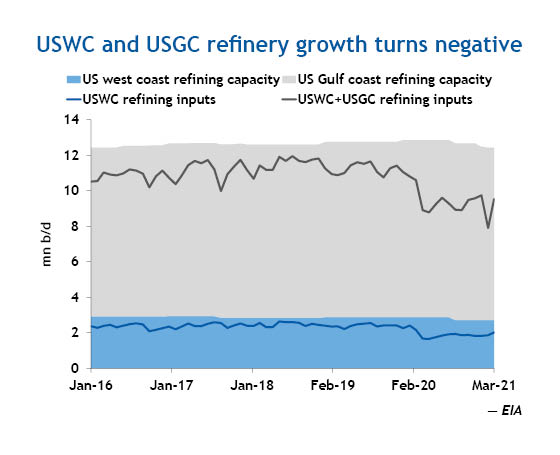 The more tonne-miles, the better for shipowners

Overall, rising diesel and gasoline shipments out of Asia into west coast Latin America replacing shipments out of the US will provide support for clean tanker rates because of the long-haul nature of the trade.

The growing Asia-west coast South America trade will primarily support MR and Handysize tankers, which have carried 98pc of diesel and gasoline volumes on the routes so far this year, according to data from Vortexa.

The Weight of Freight
In this series, our global team of experts explore the intricate and powerful connections between the shipping and commodities markets. Access the latest thought leadership and industry insight on the rapidly evolving freight markets.

Higher premiums for spot LNG delivered to Asia could become more common, with growing US liquefaction having already far outstripped the capacity of the Panama Canal.