The price of sulphur firmed rapidly in the first half of this year, owing to a combination of tight supply and recovering demand.

By the latter half of the second quarter it was evident that some price correction — largely driven by rising freight costs and an increase in supply — was due in the global market, but pricing in the Mediterranean region proved more resilient, until recently.

The ongoing Covid-19 pandemic has resulted in refining rates continuing to languish at low levels in the first half of 2021, as travel restrictions limit demand for transport fuels on a global scale. This has meant that sulphur production has continued to be curbed from usual levels, while countries have sought to secure the food production chain amid the global pandemic, supporting sulphur demand from the phosphate fertilizer sector.

Following the rapid firming in sulphur pricing over the first quarter, some softness appeared in Middle East fob pricing in the second quarter, as a limited recovery in supply coupled with a pull-back in buying from China as a result of concerns over the speed of commodity price increases and climbing freight costs.

But in the Mediterranean region, fob prices remained firm in comparison until the end of May-early June. This was aided by the low levels of sulphur production and robust demand from local buyers as well as buyers seeing unprecedented tightness in the European molten sulphur chain, pulling in larger quantities of Mediterranean granular supply to usual molten consumers in southern Europe as well as further north.

Fob price comparison, first half of 2021 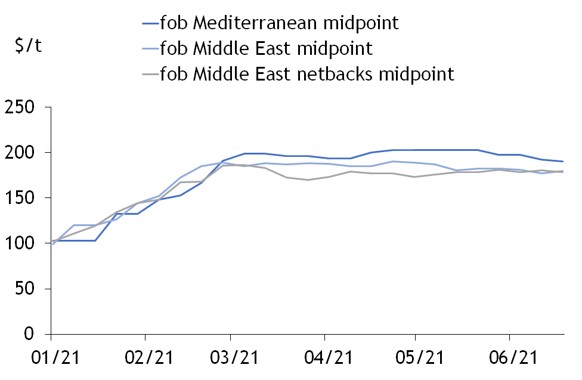 Refining rates remain lower than usual, and this will continue to be the case while Covid-19 travel restrictions are still in place and new variants keep emerging that delay the removal of those curbs on movement. European and Mediterranean sulphur supply is unlikely to return to the same levels as prior to the pandemic, as older refineries in the region are converted to biorefineries or are closed at an accelerating pace in line with longer-term environmental goals. We continue to monitor closely the balance of projects and capacity through our Argus Sulphur price reporting service. But some recovery has been evident in sulphur supply in the past few weeks as refining rates increase and maintenance work — some of which has been extended — comes to an end.

In Italy and Spain, the supply situation has forced some usual local product offtakers to turn to expensive imported product this year, a situation that is now starting to ease.

Lukoil’s Priolo refinery resumed production in May following a long shutdown and Eni’s Milazzo refinery is ramping up operations following a May turnaround, boosting Italian sulphur production. Eni’s Livorno refinery is also due to resume operations in July following maintenance that began in mid-May. A planned conversion of the plant into a biorefinery remains under consideration for the longer term.

Mediterranean refinery supply is being further supported by Spanish refinery restarts. Repsol has increased run rates from La Coruna and is bringing back its Puertollano refinery, while Cepsa’s Huelva refinery has increased its output.

Refineries in Greece and Turkey had mostly already resolved earlier maintenance shutdowns and have been running at near-usual levels.


Some easing of demand

Delivered pricing in the region has been firm since the beginning of March, ranging from a low of $197/t cfr paid for Turkmen product shipped from the Black Sea to Samsun in Turkey — with lower-cost Turkmen product subject to significant delays of several weeks so far this year — to the $235-245/t cfr paid by southern European buyers for Mediterranean-origin product delivered more promptly. These higher-priced conclusions arose from tight availability of local molten sulphur from usual suppliers coupled with firm pricing in end-use sectors, ranging from sulphuric acid to certain industrial chemicals and fertilizers. Freight costs remaining elevated further supported delivered prices.

But softness is creeping in, with the higher-priced conclusions drying up as a recovery in local supply has reduced regional tightness. The north African market has also softened following a May buying round to Egypt and as third-quarter contract negotiations with Morocco and Tunisia get under way.

In Turkey, the expected balance of sulphur availability has shifted on the news of fertilizer producer Bagfas' potential August shutdown, following a government closure notice on environmental grounds. This could result in increased exports from Turkey, adding to the recent regional supply increase after the first spot export sale from Italy was concluded in early May following a lack of availability for export for much of the first half of this year.

Another issue in the Mediterranean region and globally has been the substantial increase in freight costs, which has played a part in reducing achievable fob pricing in recent weeks. In the Mediterranean, a lack of available vessels for small sulphur shipments on shorter routes has been noted, with competing cargoes and routes taking priority.

Med fob and cfr comparison, first half of 2021 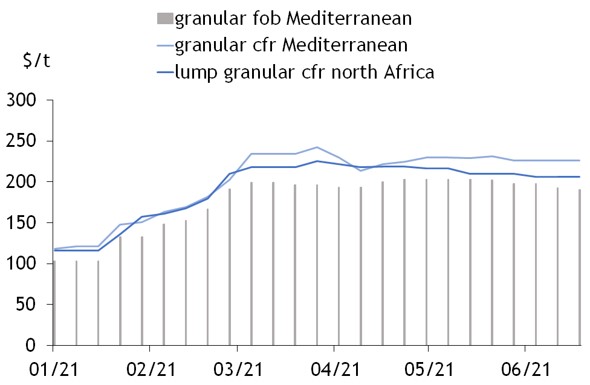 Freight rates are expected to remain firm in the coming weeks, while the fertilizer and sulphuric acid markets continue to support demand. But supply is expected to continue increasing gradually. The highs seen in pricing of $200/t fob and above are unlikely to be repeated this year, as strong freight rates will continue to set an achievable limit on fob prices. And the progress in the global vaccination drive has reduced the likelihood of a return to widespread strict lockdowns and the tight sulphur supply situation that characterised much of the first quarter.