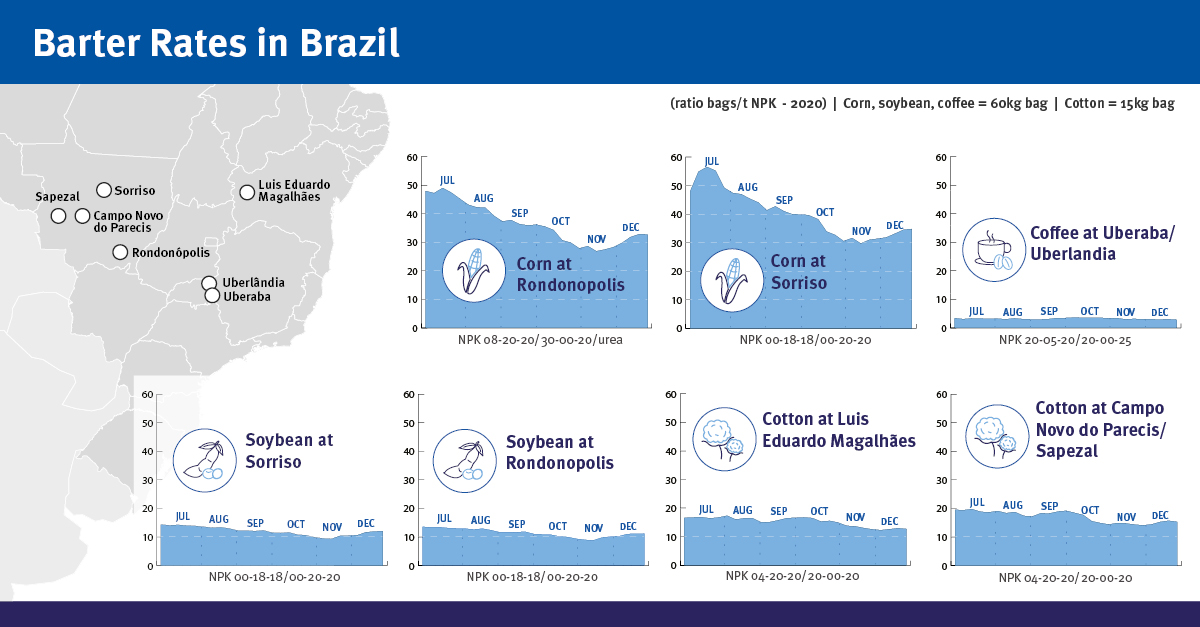 Camila Dias: Hello and welcome to ‘Market Talks’- a series of podcasts brought to you weekly by Argus Media about the main events impacting the commodities and energy sectors in Brazil and worldwide. My name is Camila Dias, Argus Brazil Bureau Chief. In today's episode, I talk to grains and fertilizer reporter, Kauanna Navarro, about how fertilizer barter rates have favored Brazil's farmers and boosted trade during the first quarter. Welcome, Kauanna.

Kauanna Navarro: Thank you, Camila. It is a pleasure to be here.

CD: I think we might start by saying what is a barter rate and why it is so important in Brazil.

KN: Sure. I think it is the best way to start. The barter rate is the ratio of the price of a bag of agriculture production to one tonne of inputs – seeds, pesticides, fertilizer – used to treat the crop. But here, we are addressing fertilizer commodities, such as nitrogen, phosphates, and potash. Lower barter rates are favorable for farmers, and in Brazil exchanging inputs for future production is the most common means of financing crops.

KN: Yes, the current rates are great for farmers. For corn, for example, the barter rates are at almost 25 bags/t below the historical Argus average of 62.55 bag/t for Sorriso/Rondonópolis since its start in December 2014.

CD: Kauanna, you spoke about barter rates as an average for two cities in Mato Grosso state. But recently Argus Brazil Grains and Fertilizer has split some barter rates location to show more clearly the trends in barter rates in Brazil´s biggest grains and oilseeds producing state. Can you tell us more about this change?

KN: Of course. I usually say that there are many Brazils inside Brazil. I think the more locations we have, the better we will understand the different Brazils. We used to have one location for corn and one for soybean considering the average grain price in Sorriso and Rondonópolis. Now, that we have them separated it's possible to observe, for instance, that for soybean the barter rate is almost one bag per tonne higher in Sorriso than in Rondonopolis.

The difference between those two Mato Grosso cities is the result of different spot grain prices in each region, so we think it is good that now we can see those differences.

CD: Thank you, it is really important to see those differences. Now back to the current favorable conditions for barter rates, I am curious to understand why it is so favorable for corn while fertilizer prices, especially urea and phosphates, are increasing now. It should mean more bags to buy the same amount of fertilizer, not the opposite. Why the rates are so low?

KN: You are right, but grain prices are outpacing increases in fertilizers. Urea in early February reached the highest midpoint level since February 2014. However, the average price of corn on CBOT in February was the highest since July 2013.

CD: And what are the factors to such high corn prices level?

KN: Camila, I always say that all the markets are about supply and demand. It doesn't matter if we are talking about urea, coal or shares. And at this moment demand is increasing, while supply is not increasing at the same pace.

The prospect of lower US corn output, according to US government data, amid greater demand for US corn exports are boosting prices.

Besides, corn imports into China remained strong in 2020, driven by the sharp rise in domestic corn prices, with shipments to Chinese ports on track to reach a record. For now, it occupies the position number 40 among the main Brazil corn buyers, led by Japan, Iran, Vietnam, Egypt, and Spain, according to the Brazilian Ministry of Agriculture.

CD: And when it comes to China, we had something for sure: a huge amount of volume will be involved.

KN: I do not doubt that. China has bought and continues to buy more Brazilian corn as it boosts demand in the international market, raising expectations of a new protocol of trade with its South American partner. It would support even more corn prices.

CD: Back to the barter rates question. You mentioned the corn barter rates scenario, but how is it for soybean? Do farmers have the same reasons to celebrate?

KN: Soybean barter rates are not as favorable for Brazilian farmers as corn barter rates, but they still deserve to be mentioned. The current soy rate for Sorriso and Rondonopolis is 15pc below that of a year-earlier level. In Rondonopolis, the rate is just 4 bags/t lower than the historical average.

CD: Why is it not so favorable?

KN: The average price of MAP, the key fertilizer for soybeans, is at its highest since August 2012. And while participants reported a slowdown in the market in recent weeks, MAP prices continue to increase, driven up by Brazilian import demand and an overall lack of MAP in the market.

CD: Why is there a lack of MAP available? Was there any supply issue?

KN: No, globally we didn't have any significant supply issue. The hike in MAP phosphates prices is directly related to the US market. Availability is limited as a consequence of preliminary duties levied by the US on phosphate imports from Morocco's OCP and Russia's EuroChem and Phosagro. Putting it in simple terms the duties caused a rally for phosphate products on the global market and US demand reduced the volume of MAP and TSP available on the global market. Usually, December and January are months of low liquidity on the Brazilian market, but as cfr prices have risen, Brazilian soy producers have been buying up MAP early for the 2021-22 soybean crop.

CD: In your view, is this scenario going to persist?

KN: It's hard to say. But, as I said before, the market is always about supply and demand. What we are seeing now is an increase in demand for soybean crops. Market participants believe phosphate's prices might get even higher in the US, as buyers cover their remaining needs for the springtime. US producer Mosaic is filling the gap left in the local market as preliminary import duties essentially barred producers from Morocco and Russia to ship there from July onward. Phosphates prices might keep climbing, as global DAP and MAP markets are undersupplied, and DAP values should continue to gain until May.

CD: So, It's better the farmers take the advantage of the current barter rates level...

KN: In my opinion, it's a good time to think about the remaining needs for the next soybean crop plating.

CD: Kauanna, besides corn and soybeans Argus Brazil Grains and Fertilizer also publishes barter rates for cotton. This has also been updated recently. Can you tell me more about those changes?

KN: Yes. We added two new locations for cotton as well. One in Mato Grosso, an average for Campo Novo do Parecis and Sapezal. This new location is the most important cotton region in Brazil. We also added one location in Bahia state, in Luis Eduardo Magalhães, also an important producing area in Brazil.

CD: As we are talking about this, how are the barter rates for cotton?

KN: Cotton producers also have a reason to celebrate, or, at least, anticipate purchases for the next crop. Barter rates for Campo Novo do Parecis/Sapezal cotton is 16 bags of 15kg of cotton lint for one tonne of fertilizer used in the cotton planting. The level is in line with the average but almost 30pc lower than one year ago. In the northeast state of Bahia, the barter rate is almost 3 bags lower than in Mato Grosso because of higher spot prices in the region.

CD: Thank you very much, Kauanna.

And thank you for tuning into our podcast. If you want to learn more about global commodities market, visit our website at www.argusmedia.com. We will be back soon with another edition of “Market Talks”.

Brazil’s corn crop hit a new high in 2020, and domestic prices for the grain reached record levels. What can we expect for 2021, and what is the outlook for farmers working in the country’s main producing regions?