In this episode of The Crude Report, Argus’ vice president Alejandro Barbajosa and head of forecasting Francis Osborne discuss the impact on India’s oil sector and how it may affect global crude oil and refined products markets more widely.

After India’s total oil sales just returned to pre-Covid-19 levels in March, preliminary data suggests that total April demand could have declined by 1mn b/d in response to the tragic deterioration in the county’s Covid-19 situation.

Alejandro: Hello and welcome to The Crude Report, Argus's podcast series on global crude oil markets. My name is Alejandro Barbajosa, VP for Crude and LPG, Middle East and Asia-Pacific.

Today, I have the privilege of speaking to Francis Osborne, who is Head of Forecasting at Argus. And this comes just as Francis is finalizing the publication of the latest issue of the Argus Crude and Refined Products Outlook. Today, the topic of our conversation will be the effect of the pandemic, and specifically, the most recent surge in infections in India on the global oil market. This is a topic that there's a lot of interest now across Asia and around the world because of the potential global implications that this would have.

So Francis, to get started, I would like to ask you precisely that. What do you think would be the impact of Covid-19 in terms of oil demands and input by India?

Francis: Indeed. Well, it's a tragic event, and event seemed to be spiraling slightly out of control. It's quite clearly going to have a significant short-term impact. Oil demand in India is...runs at approximately for... Well, in March, it was recorded at 4.8mn b/d, and very preliminary data for April – the first half of April – suggests that gasoline and diesel demand is already shrunk month-on-month by about 5%; jet probably down by about 8%. 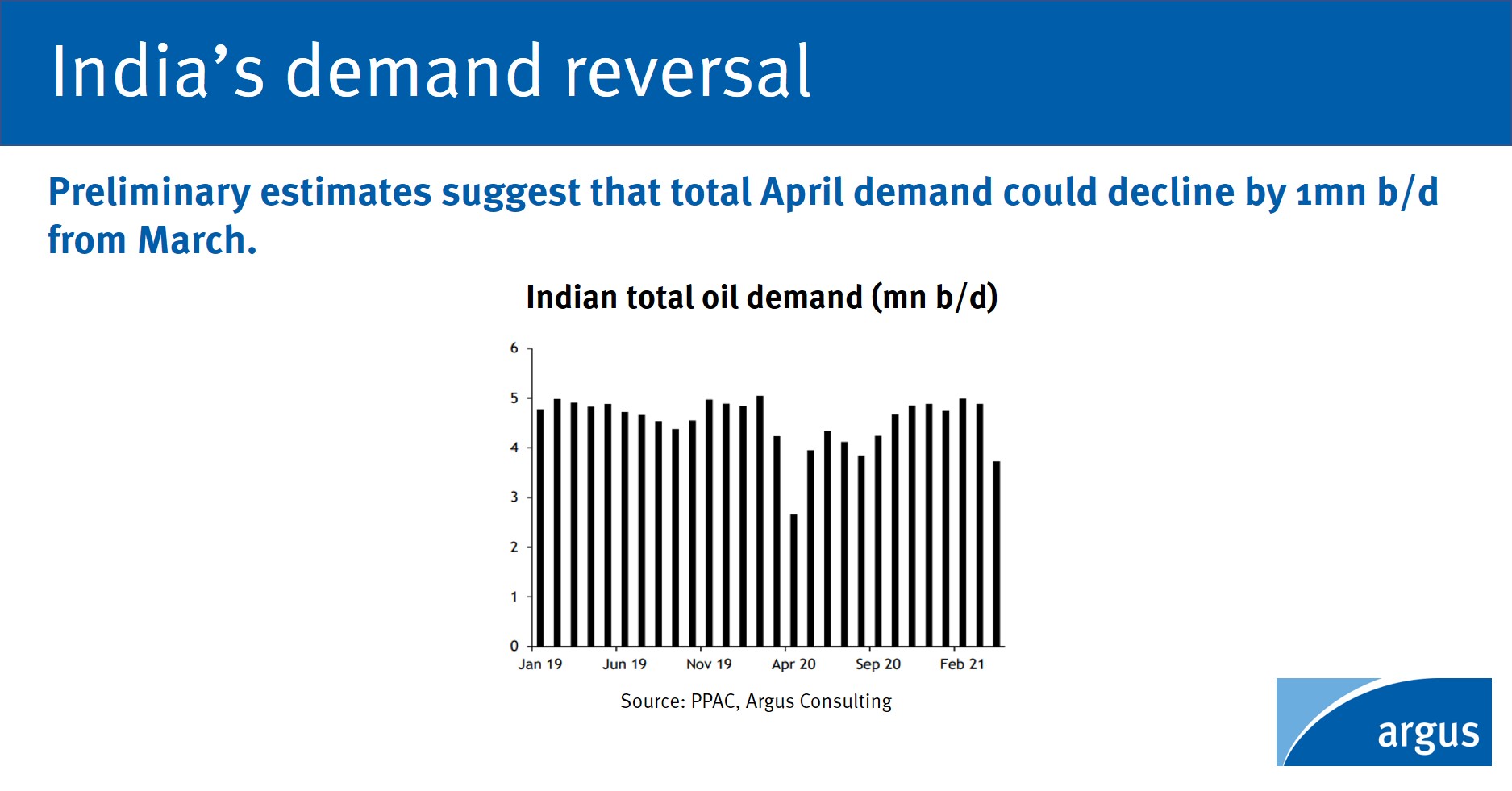 In our latest estimates and in our current report, as you'd very shortly, we estimate, probably the Indian oil demand, in total, will drop by about 1mn b/d in April compared to March, and that's clearly a significant amount of lost demand. Crude imports into India average around 4mn b/d – 70% of that's Middle Eastern crude. India's also an increasingly important destination for US crude, so clearly, if we lose demand to that extent, we're going to lose crude imports as well.

We can look back to last year, 2020, when the pandemic first struck, and we can observe what actually happened. Crude imports did drop by about 35%, not immediately, but over the course of several months after April. So by July, they were one-third lower. India imports a lot of LPG, but not a great deal of refined product, but it is actually a significant product exporter and product exports also dropped by about 30%, so it's clearly going to have a pretty sharp impact on crude and refined products markets.

Alejandro: So when we look at these numbers that you've very kindly given us in advance of the release of the report, in terms of the impact it may have specifically on Indian demands, I guess the big question is how long this disruption to demand may last. How long do you think it will be before India returns to normal?

Francis: The real answer is, of course, nobody can possibly tell that. The extent of the pandemic in this wave is clearly much harsher, much more significant than it was last year, when it first cropped up. Again, let's use 2020 as a benchmark. We were largely back to normal, if we can call that normality, within three months. So in April last year, demand dropped 1.6mn b/d. Three months later, we've recovered about 90% of that. But, having said that, even by the end of the year, December, or January of this year, demand in India had only really just about got back to pre-Covid levels recorded at the start of 2020.

But having said that, so, you know, what tends to happen is that the... And we've observed this around the world, globally and across all regions, the immediate impact of lockdowns is extreme. We'd lose a lot of demand very quickly, but when lockdowns start to ease, as we sincerely hope they will do in India before too long, when the situation does improve, then demand does bounce back pretty quickly, but then stalls – it takes a long time to really get back globally at moment, we're not anywhere near back pre-Covid demand levels.

Alejandro: So broadening this scope of your analysis, does lower demand in India have any consequences for refining at a regional or global level?

Francis: As I said, India's a significant exporter of product. Apart from LPG, it's not a big importer of refined products. So I think we're probably going to see, very immediately, a bit of an impact on global refining, because what's happened is that the refiners in India have contracted for crude under their existing term contracts with at least producers and others. and they are committed to take delivery of that crude, and that crude's going to arrive in April and in May, possibly even some volumes into June.

If demand is still very low, that crude will still need to be processed and the product, if it can't find a home in India because of lockdown, it will export to the global market, and that will be slightly unwelcome in a system which is still struggling to draw down the surplus eventually built up during 2020.

Globally in the refining community, we don't really want to see an increase of Indian exports over and above what would normally happen. It's bad news for refiners generally trying to struggle back to normality that's seen some improvement in profitability.

Alejandro: So if we now take a look at the supply side, how could that imbalance generated by the drop in Indian demand affect Opec’s efforts to rebalance the market? Could it even derail those efforts?

Francis: In the short answer, I think, is no, it clearly doesn't help. Any loss of demand makes the rebalancing process a little more prolonged and trickier. But Opec+, led of course by Saudi and other Opec members, is very firmly in control of the rebalancing process. They are in the process of returning almost 2.5mn b/d of crude to the market.

Alejandro: And given the configuration of refineries in India, would you say there are any wider implications of them importing less crude?

One of the peculiarities of the market at the moment is that whilst the key benchmark North Sea Dated Brent crude, which is light and sweet, has been very strong in recent weeks. In fact, the wider market of crude that's actually been relatively weak, and we've seen crude differentials generally across the world weakening, but relative to the benchmark North Sea Dated marker. And it is indicative of a market that is actually still very well supplied.

One of the key crudes that we monitor closely is WTI US light sweet crude coming into Europe, there’s a Rotterdam quotation widely used and reported by Argus, and that differential to Brent has been sinking steadily over recent weeks. Clearly, if Indian refiners stop buying as much US crude as they have been, that crude is going to back up and prices will weaken even further, so there will be a knock-on effect on crude differentials, I think.

Alejandro: Well, there's no doubt that whenever you have such a situation developing in the world's third-largest oil importer, it's bound to have broader implications. So with that, Francis, I would like to thank you for joining us today.

And for more information on the Argus Crude and Refined Products Outlook, which is published monthly and includes forecasts for several crude benchmarks and oil products up to 24 months in advance, you can go to our website at www.argusmedia.com. Thanks for tuning in, and we look forward to you joining us on the next episode of The Crude Report.

In this episode of The Crude Report, senior reporter Chris Knight and associate editor Haik Gugarats discuss the outcomes of Biden’s energy, climate and foreign policy priorities in his first 100 days in office and what to expect in coming months.

Much has been said about US president Joe Biden’s rejection of the Keystone XL project. The now-suspended project would have provided 830,000 b/d of pipeline capacity from Canada’s oil sands to the US midcontinent, but after years of delays, Canadian crude oil producers...

The Crude Report: WTI pricing at the USGC nears uniformity

The transparency of locational spreads between the various US Gulf coast terminals that make up Argus AGS has proven quite popular, as it helps to highlight each connection’s unique market fundamentals.