Green ammonia as a fertilizer raw material: quantifying the market potential
The recent deluge of interest in decarbonisation is affecting a range of economic sectors, with agriculture no exception. Within this sector, the fertilizer industry is receiving a huge amount of attention because of mounting interest in green ammonia. Ammonia is a fundamental product for the fertilizer industry since it is the key raw material for nitrogen fertilizer supplies, which in turn is a crucial input for food production. At least 50pc of global food production is possible today because of synthetic fertilizers.

Today’s production of nitrogen fertilizers is energy intensive, given that ammonia production is mainly based on natural gas as a raw material and steam methane reforming as the main technology. To put things into context, nitrogen fertilizer production is responsible for 1-2pc of global greenhouse gas (GHG) emissions, which is almost comparable with the levels produced by the shipping industry.

Replacing natural gas as a feedstock for ammonia production with hydrogen produced from renewable energy sources theoretically offers the potential to produce carbon-free nitrogen fertilizers. But although there is a significant potential for using green ammonia in new end uses, such as marine fuels and power generation fuels, the potential for using it in the production of carbon-free nitrogen fertilizers is more problematic.

As shown in the chart below, a large portion of nitrogen fertilizer consumption globally is in the form of urea, which is not a carbon-free product. Typically, the carbon in urea’s molecule is obtained from the carbon dioxide (CO2) emitted by natural gas or coal-based ammonia production. When farmers apply urea to the soil, an equal amount of CO2 is emitted to the atmosphere, which means that urea production is unsuitable for sequestering CO2. Capturing and using atmospheric CO2 is theoretically an option, but it implies a prohibitive cost increase on top of expected high green ammonia costs. 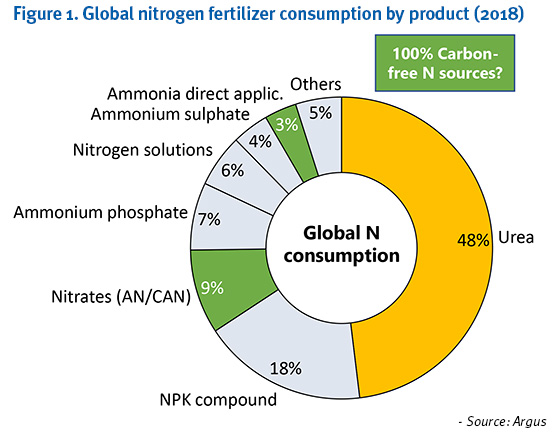 Green ammonia itself could be used as a direct-application nitrogen fertilizer, but it only accounts for a mere 3pc of global nitrogen application. The bulk of direct application ammonia demand is mostly limited to North America.

Several other nitrogen products do not contain carbon, and these include popular products such as ammonia or nitrate-based NPK compounds, ammonium phosphates and ammonium sulphate. But the production process of all these products would not guarantee their carbon-free credentials. Green ammonia could certainly be used for the production of ammonium phosphates and NPK compounds, but at the same time we would need a carbon-neutral supply of mined phosphates and potash, which would be challenging to obtain. The same applies to ammonium sulphate, which is often a by-product of other polluting industrial processes, such as caprolactam production or as a coke oven by-product.

It could be argued that even a partial reduction in the carbon footprint of ammonium phosphates, NPKs, and ammonium sulphate should be welcomed. But ultimately this will depend on how regulators will define lifecycle emissions, traceability and the associated potential carbon credits, which would be essential to offset the additional cost of green ammonia.

But nitrates (AN/CAN) would be a more viable and verifiable option for producing verifiably carbon-free nitrogen fertilizers, since in many cases nitrates production is integrated with ammonia supplies. This means that the nitric acid and nitrates units could be based on green ammonia and the same renewable power source used to produce it.

The issue with nitrates as a carbon-free nitrogen source is that the market for this type of product is limited geographically for a number of reasons, mostly related to safety issues, as AN can be used as an explosive. Just under 70pc of fertilizer grade AN and CAN consumption occurs in western and central Europe, Russia and central Asia. Nitrates also satisfy a relatively small portion of total nitrogen fertilizer demand globally, around 10pc of the total. This implies that the potential addressable market for green ammonia as a raw material for fully carbon-free fertilizer production is relatively small, based on today’s market structure. If this is the case, and if overall decarbonisation of the fertilizer industry is the objective, then there are other options for reducing the environmental impact of fertilizer use.

Perhaps the most significant in terms of potential environmental benefits can be summarised in the list below:

A 2020 white paper published by consultancy McKinsey estimated that these fertilizer-related measures alone could amount to an overall reduction of over 700mn t CO₂-equivalent. Let us compare this with the potential GHG reduction if we assume that the world’s direct ammonia application and nitrates production will switch to green ammonia. These products account for around 13mn t of nitrogen consumed globally, which if converted to ammonia product tonnes would equal to almost 16mn t of ammonia, with ammonia being 82pc nitrogen. If we assume that globally ammonia production is responsible for 1.6t CO2/t ammonia, switching to green ammonia would save around 25mn t of CO2, which pales in comparison with the potential savings arising from the improved practices mentioned above.

In conclusion, it is true that green ammonia could become a carbon-free raw material for a portion of global nitrogen fertilizer production, but if the goal is overall decarbonisation of the fertilizer industry in the context of its role in the food system, other products, tools and approaches will be at least as effective.

Argus’ consulting team is well placed to research and advise on green ammonia and the alternative solutions to decarbonising fertilizer production.
Click here to contact us to find out more details or how this trend will affect your company

As the coronavirus health scare deepens after spreading beyond China, markets globally face both supply and demand side risks.

Podcast - Opec and US shale: the latest coronavirus casualties | Episode 3

Oil prices have posted their biggest drop in almost three decades towards $30/bl on expectations that an Opec-induced supply surge will exacerbate a global surplus, as demand growth collapses beyond Asia with the spread of the coronavirus to most major economies.

Brazil’s independent fuel retailers have consolidated their lead in the opening up of the country's downstream market by joining forces.