Eyes are on Iran as the Joint Comprehensive Plan of Action (JCPOA) committee delves further into its negotiations aimed at reviving the 2015 nuclear deal, which may soon result in the lifting of all major sanctions against the Mideast country.

Iranian president Hassan Rohani last week said only "small details" need to be hashed out when delegations return to Vienna next week but that the main issues, including sanctions on oil, petrochemicals, shipping, insurance and the banking sector have been settled. But Iran's own deputy foreign minister Abbas Araqchi, who has been leading the country's delegation in Vienna, struck a more cautious tone. He said that while "a framework or structure" of an agreement has been reached, differences still remain on "some key issues."

Sanctions against Iran previously removed more than 2mn b/d of Iranian crude from international markets, indicating spot crude cargoes from key exporters like the US and west Africa may need to fall in value to compete with the additional supply. Iran has already began to increase its exports since the beginning of the year, shipping up to 800,000 b/d to China in recent months.

Meanwhile, North Dakota oil producers breathed a collective sigh of relief when a US judge last week ruled that Energy Transfer's 570,000 b/d Dakota Access crude pipeline (DAPL) can remain in service during a new environmental review. DAPL is part of the Bakken system which connects the Bakken shale to the Texas coast.

In a robust, 31-page opinion, US District Court judge James Boasberg said the Standing Rock Sioux and other Native American tribes that requested the shutdown "have not carried their burden to demonstrate a likelihood of irreparable injury absent an injunction.”

But DAPL is not in the clear yet as the underlying case continues and the new environmental review is expected by March 2022. In addition, Standing Rock could appeal Boasberg’s decision on the shutdown motion. We’ll be watching. 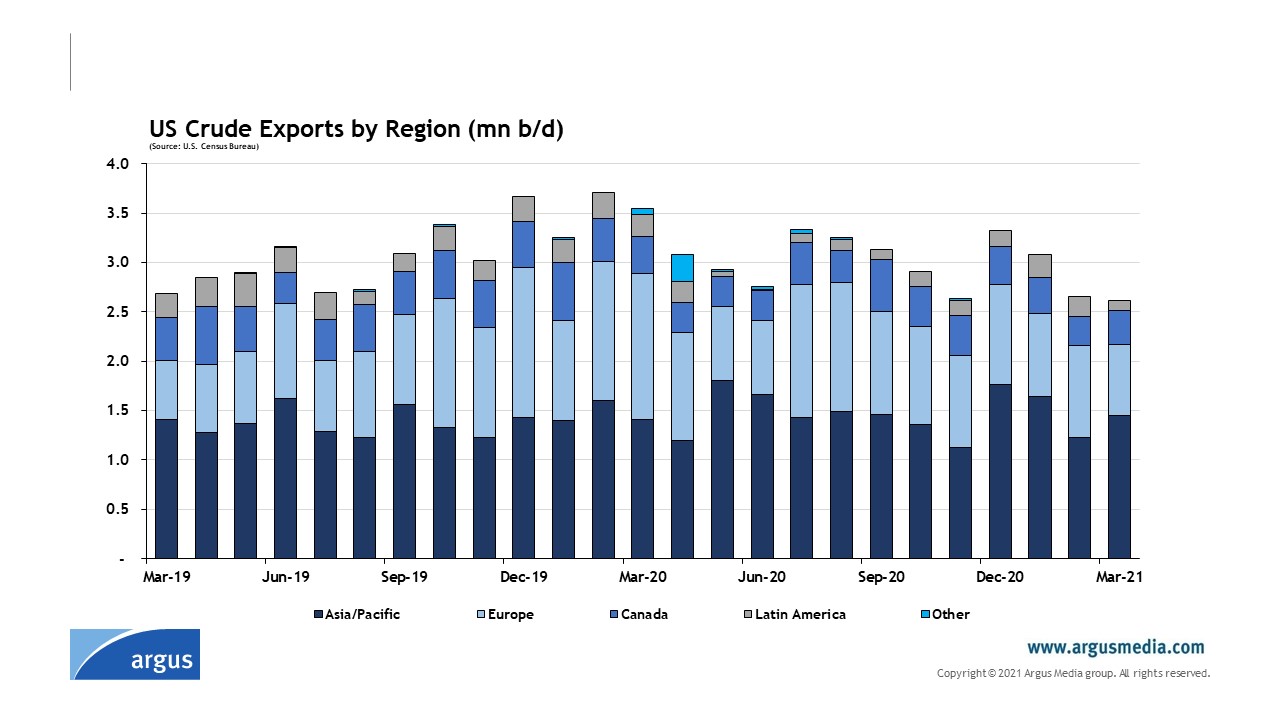 The latest US Census trade data was surprising in its direction. We thought March numbers would be higher because the Texas freeze had stymied exports in February. But the number went lower. US crude exports averaged about 2.61mn b/d in March, down from 2.65mn b/d in February. The drop is further evidence that exports appear to be waning after showing resilience last year.

South Korea surpassed India as the top destination for US crude in March as a growing Covid-19 outbreak in India is weighing heavily on oil demand there. Other Asia-Pacific countries were among the top takers of US crude including Taiwan with a record high 305,000 b/d.

On a side note, the Census March trade numbers showed something strange and utterly hard to believe – that US crude was exported to Venezuela. Could this be true? Well, no. It was a mistake. The agency issued a correction stating that the 484,000 bl actually went to the Dominican Republic. So everyone can just relax.

Enterprise Products remains bullish on its planned offshore crude export terminal and wants to share the joy. The company is in talks to possibly add joint venture partners to the terminal which will be capable of loading Very Large Crude Carriers (VLCCs) off the coast of Freeport, Texas. Co-chief executive Jim Teague told Argus earlier this year that Enterprise is aiming for federal approval for the Sea Port Oil Terminal (SPOT) in the third quarter.

And on a somewhat related note, some seafarers are getting an unusual bonus as they reach the shores of Texas – a Covid-19 vaccine. The Port of Corpus Christi and Calhoun County are offering vaccinations to some international seafarers. Recipients must have a US visa and shore pass to be eligible for the single-shot Johnson & Johnson vaccinations. So come for our crude, stay for our Covid-19 vaccine!

A new trickle of US crude is flowing toward the Baltic Sea, with one tanker already discharging a cargo of light sweet crude from Ingleside, Texas, earlier this month, marking the first export to Lithuania since December.

The tanker was likely carrying a cargo of WTI for Polish integrated firm PKN Orlean, which signed a one-year agreement to buy 20,000 b/d of the Permian crude from ExxonMobil for its refineries in Poland, Lithuania and the Czech Republic.

And flows to India might continue falling to balance a decline in refinery throughputs. State-controlled refiner Bharat Petroleum (BPCL) plans to maintain its existing term agreements to buy crude but will adjust its spot purchases from the US and west Africa in line with falling throughputs.

The refiner additionally said it would replace US crude purchases with Iranian grades if sanctions are relaxed by the end of the year. BPCL bought roughly 24,000 b/d of US crude from April 2020 through March 2021, and about 40,000 b/d of Iranian crude before the last round of US-led sanctions was imposed.

We’ll be watching how the market reacts to the US-Iran developments and the worsening Covid-19 situation in India. In the meantime, we wish you smooth sailing in these choppy waters.