It was not quite two years ago that Argentina was poised to become the world’s latest LNG exporter.

Flush with gas from the Vaca Muerta shale formation — described by Shell as “one of the world’s best unconventional resources” — state-controlled YPF hired the Tango floating liquefaction barge and hoped initially to export LNG during the southern hemisphere summer, when regional demand is lower and consumption in the northern hemisphere’s biggest gas-consuming countries is buoyed by winter heating demand.

But it was not to be. Thwarted by annual inflation of over 40pc and persistent labour strife, and battered by the global recession that followed the first wave of Covid-19, Argentina has struggled to maintain the pace of drilling required to sustain production from a shale formation. Tinkering with wellhead price controls and the tax regime on oil and gas production in a misguided attempt to shore up the country’s finances did little to attract investment.

Argentina’s gas production fell to 123mn m³/d last year from 135mn m³/d in 2019, and then dropped to 114mn m³/d in February this year. Output this winter could be just 109.7mn m³/d, the country’s energy secretariat estimates. Instead of enjoying an exportable summer surplus, Argentina is facing a massive winter gas supply gap. YPF was forced to declare force majeure on the Tango last year, unable to pay shipowner Exmar without any export revenue.

It was a sad echo of the 2004 energy crisis, when the combination of a two-year gas price freeze and the devaluation of the peso curbed investment in gas production, leaving Argentina facing a winter supply shortage. Domestic rationing for industry and power generators ensued. Buenos Aires then started curtailing pipeline exports to its neighbours, sparking a major rift with Chile, which has since reversed the pipeline flow to supply its beleaguered neighbour across the Andes.

In a last-ditch attempt to close this year’s supply gap, the government launched in February a four-year auction programme, aiming to lift production by more than 70mn m³/d. The difference between prevailing prices and values attained at auction would be covered by the government — but only up to a maximum of $3.70/mn Btu. The response was lacklustre.

The pandemic also dealt a blow to gas production in recent weeks, as protests by healthcare workers demanding a pay increase blocked access into and out of Vaca Muerta. The blockades slashed output by 3.5mn m³/d before the protesters lifted roadblocks last week. 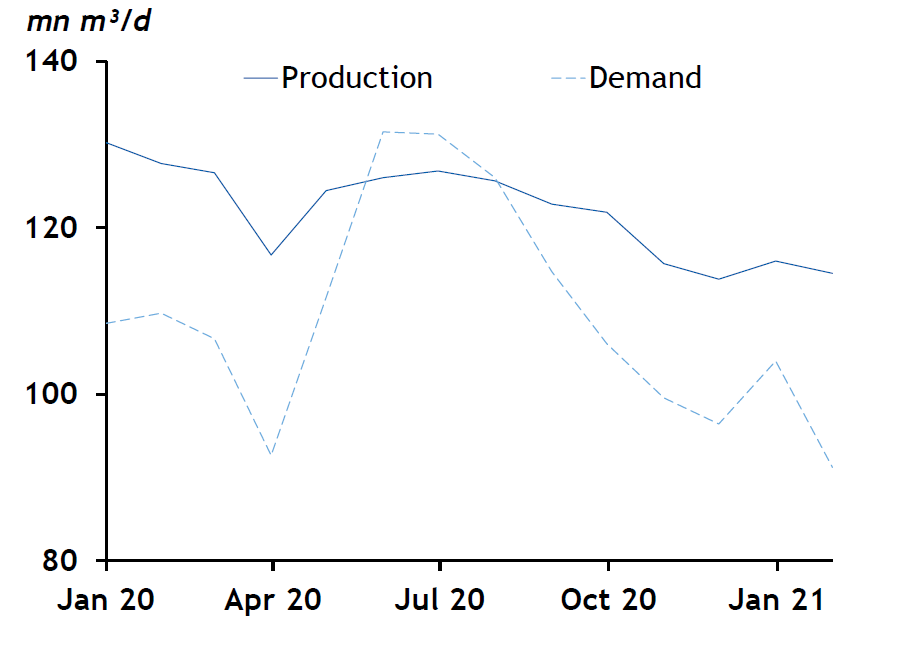 And so the aspirational LNG exporter has been forced to resume imports this winter — a bitter pill, given Argentina’s struggles with its current account balance and outstanding repayments on $45bn of IMF loans. The country needs 21mn m³/d in May, 42mn m³/d in June, 49mn m³/d in July, 28mn m³/d in August and 9mn m³/d in September, the energy secretariat says. And because shallow water means the 3.7mn t/yr Escobar import facility can only receive partial cargoes, the country has had to hire another floating storage and regasification unit (FSRU) to be deployed at Bahia Blanca in late May-August. Argentina had only just said goodbye to the FSRU that was moored there from 2008 until 2018, when rising Vaca Muerta production made the facility redundant.

Some officials hope that Argentina can still make a comeback — that if Vaca Muerta production can somehow be put back on track, the plan to export LNG can be revived. There is even talk of a larger, offshore facility, given the scale of the country’s gas reserves. But it is far from clear how the debt-laden, cash-strapped country could fund such a venture in the foreseeable future — and right now, Argentina still has this winter to get through.