Polyvinyl chloride (PVC) prices around the world are at or near record highs. On 15 October, the China suspension-PVC (S-PVC) pipe ex-works price reached a record 14,900 yuan/t, although in the second half of October and first week of November, prices have retreated. 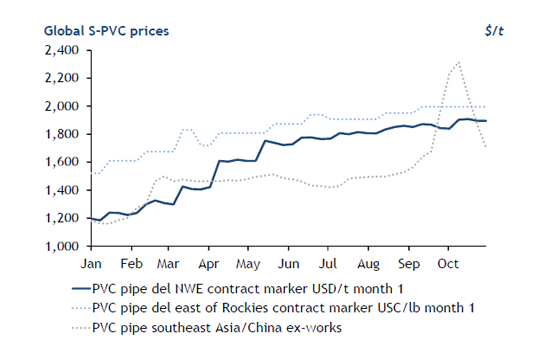 Various factors drive PVC prices, principally supply-demand fundamentals and production costs, although things are complicated by the inherent connection to chlor-alkali. Beyond this, other factors along the value chain also impact PVC prices.

In this blog post, these factors will be reviewed and presented in relation to the current market dynamics and global price environment.

Firstly, upstream energy values need to be considered because fundamentally energy drives all petrochemical prices, including PVC. Crude oil, natural gas and coal all have an influence in shaping the PVC price direction. Naphtha derived from crude oil and ethane derived from natural gas are cracker feeds in the production of ethylene, one of the key building blocks for PVC. In China, coal is vital for the PVC industry because of the prominence of the carbide-based PVC production route via acetylene. The changes in crude, natural gas and coal prices cascade down the vinyls value chain and result in shifts in feedstock prices and ultimately PVC. 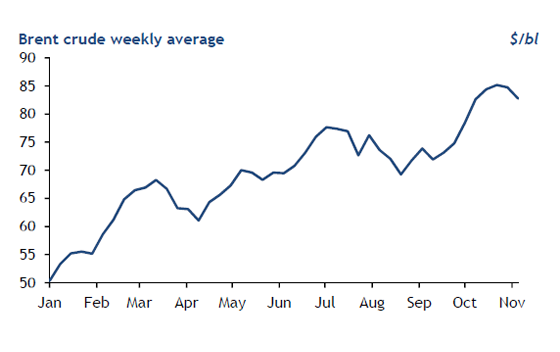 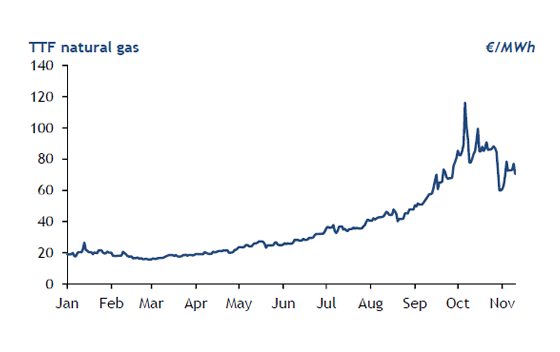 Generally, chlor-vinyls production is energy intensive. Chlor-alkali and PVC production relies on these energy sources to power assets and so they are an important component of the variable production costs. In October, the sharp rise in utility costs (natural gas and electricity prices) in Europe led to a series of surcharge announcements across the European chemical industry, as discussed in this article by Alex Sands. PVC producers announced price surcharges too, with one producer implementing a surcharge of €110/t.

The record Chinese S-PVC pipe price on 15 October was caused by China’s dual control policy to limit emissions. Coal output and supply was impacted, resulting in a reduction in carbide-based PVC production, firming the domestic Chinese PVC market balance and triggering the surge in prices. PVC was not the only polymer affected — domestic polyethylene prices rocketed as capacity was taken off line in association with the closure of coal mines. At their peak on 8 October, linear-density polyethylene (LDPE) prices in China were assessed at Yn13,750/t, the highest since 13 December 2013.

Moving down the PVC value chain, ethylene feedstock is the largest variable cost component for the manufacture of PVC. In Europe and North America, the ethylene monthly contract price sets the basis in monthly price negotiations, with the monthly PVC cost change historically reflecting half of the monthly ethylene movement — during a balanced market — in order to account for half of the PVC feedstock. With European and US PVC markets currently experiencing various degrees of tightness, producers have shifted from typical negotiating mechanisms and are instead choosing to raise PVC prices above the implied ethylene movements to account for limited availability and higher production costs. In the Chinese spot PVC market, the spot ethylene price can form the basis of price discussions too, but because of the nature of the market and various production routes for PVC, supply and demand dynamics usually play a larger role in negotiations. In a non-balanced PVC market, the price is driven by key cost and economic factors and by supply and demand fundamentals beyond the monthly ethylene contract settlement. 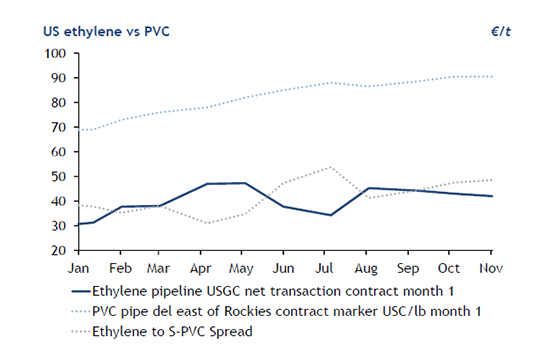 Chlorine is the other key building block in production of PVC, and PVC is the largest chlorine derivative. PVC assets are constructed with an intermediate backbone fully integrated into chlor-alkali, so PVC and chlor-alkali market dynamics are intertwined. A production outage at the chlor-alkali unit prevents PVC operations and vice versa. And chlor-alkali production problems have restricted PVC production over the past year — a recent example being when Hurricane Ida shuttered chlor-vinyls production on the US Gulf coast, leading to a tighter US PVC balance and gains in the US monthly contract price.

Of upmost importance to PVC pricing is supply. PVC supply considerations include effective capacity, operating rates, production, inventories and imports. Globally, PVC supply has been constrained in 2021 and the shortage has been a major contributor to the rise in global prices, with scheduled maintenance, weather-related disruption and force majeure declarations adding to the pressure. And the shortage in containers and vessels have exacerbated the tightness, particularly in import dependent regions.

In the short term, PVC supply should rise in the three major producing regions. In the US, plants continue to ramp up following Hurricane Ida, which caused the closure of ports in Louisiana (Baton Rouge, New Orleans, Plaquemines, South Louisiana and St Bernard) and Mississippi (Biloxi, Gulfport, Pascagoula and Bienville). This led to delays in PVC and other commodities entering and exiting the Gulf ports, and polymer container freight rates climbed further.

In Europe, domestic PVC production has also steadily grown in recent months, following the spate of maintenance outages and force majeures earlier this year, although this could be derailed by chlor-vinyls production cuts if surcharges are not implemented in contracts given the aforementioned rise in utility costs.

In China, effective capacity via the carbide route is on the rise, with nearly 2mn t/yr of capacity returning from maintenance at the end of October after the Chinese government eased dual control limits on coal production. As mentioned in the introduction, this prospective rise in PVC supply has preceded a decline in PVC prices.

US PVC exports have been constrained over the past year, with domestic supply prioritised during this period of unstable production. The imminent increase in PVC capacity will give US firms more scope to meet domestic demand and also seek opportunities in tight export markets.

And then there is demand. There are two major types of PVC – S-PVC and emulsion-PVC (E-PVC) – and many grades of each are used across various applications.

The largest end use of S-PVC, and PVC overall, is in production of plastic pipes, from which the key contract marker S-PVC pipe grade is derived. The second-largest application is in the production of window profiles and fittings ultimately used in construction or vehicles. Other major uses of PVC include in rigid packaging, medical devices, synthetic leather and coatings. The key industry driving PVC demand is construction. Demand from this sector has tended to be seasonal, peaking in the spring and summer months, then weakening during winter. But this trend is likely to be disrupted in 2021-22 in the US and Europe as a result of robust pent-up demand. In fact, the strong demand environment is ensuring the market balance remains firm, despite the rise in effective capacity in each region.

Another consideration on the demand side is the potential substitution of PVC with HDPE in plastic pipes. PVC tends to be the material of choice for many pipe applications because it is strong, lightweight, resistant to chemical corrosion, easy to assemble, recyclable and cost efficient. The fundamental differentiator is cost efficiency — the higher HDPE price places a ceiling on S-PVC values. If S-PVC pipe grade prices exceed those of HDPE, then consumers shift to using HDPE for certain pipe grade applications. In Europe, the S-PVC price has recently approached parity with HDPE, so there is the prospect of substitution should this situation persist. 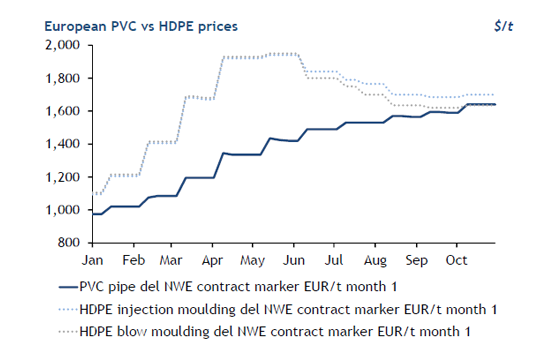 Having examined the factors that weigh on PVC pricing, we can now make a short-term PVC price trend projection.

After reaching a peak in mid-October, Chinese S-PVC pipe prices have retreated and are projected to soften further through to the end of the year. This reflects rising carbide capacity and higher production, slower demand with the onset of the Chinese construction industry’s off-season, and reduced energy and feedstock prices as China’s dual control policy is relaxed.

While prices soften in China, elsewhere the uptrend looks set to continue until the year’s end. In Europe, production costs continue to rise — ethylene is backwardated, energy costs remain inflated, and European chlor-vinyls producers are still trying to implement surcharges. Demand is robust, but supply is uncertain, given the potential for energy related production cuts.

In the US, producers will target rises in November and December contract prices for many of the reasons applicable in Europe. But with Shintech’s new PVC capacity soon to enter the market, supply should improve and will certainly outpace any short-term growth in demand. After a year of domestic focus, US PVC suppliers will soon return to the export market.

Arbitrage opportunities are emerging. Chinese S-PVC prices are lower than in the US and Europe, and the gap will widen until the end of the year. Major import markets — including India, Latin America and Turkey — are priced even higher. But the challenges facing the shipping industry continue to prevent a normalisation of global S-PVC prices. While the situation is reportedly improving, import markets are expected to face constricted supply and inflated S-PVC prices until the year’s end.

Effective 27 October, specialty chemicals manufacturer Trinseo will implement an up to €500/t ($579/t) surcharge on plastics, latex bunders and synthetic rubber products produced at its European facilities. The fee will be applied to contract and spot volumes as terms a...

The global shipping industry has been disrupted throughout the past two years. Container shortages, a lack of vessel availability, delays at ports, insufficient port capacity and infrastructure, and strong demand for goods have all resulted in challenges in securing shi...