What is “carbon-neutral” LNG?

It is important to clarify that “carbon-neutral” LNG does not refer to an LNG cargo void of carbon or emissions. Natural gas is composed of 85-95pc methane, which is made up of a carbon atom combined with four hydrogen atoms (CH4). What this means is that carbon is an intrinsic component of LNG, and there is no LNG cargo that is inherently carbon-free.

What “carbon-neutral” LNG refers to is the offsetting of carbon emissions from the LNG supply chain through the purchase of carbon credits, which are used to support a wide range of project types including reforestation, afforestation or renewable projects. Some of these undertakings – such as reforestation and afforestation – benefit the environment by directly removing carbon from the atmosphere, thereby cancelling out emissions from the LNG cargo. But other projects, such as large-scale solar and wind projects, serve to merely prevent a rise in emissions and do not result in emission abatement.

How has the uptake of “carbon-neutral” LNG been in recent years?

There have so far been significantly more “carbon-neutral” LNG deals concluded this year than both of the last two years combined, driven by countries’ respective net zero targets and companies across various sectors paying more attention to the sustainability of their activities. 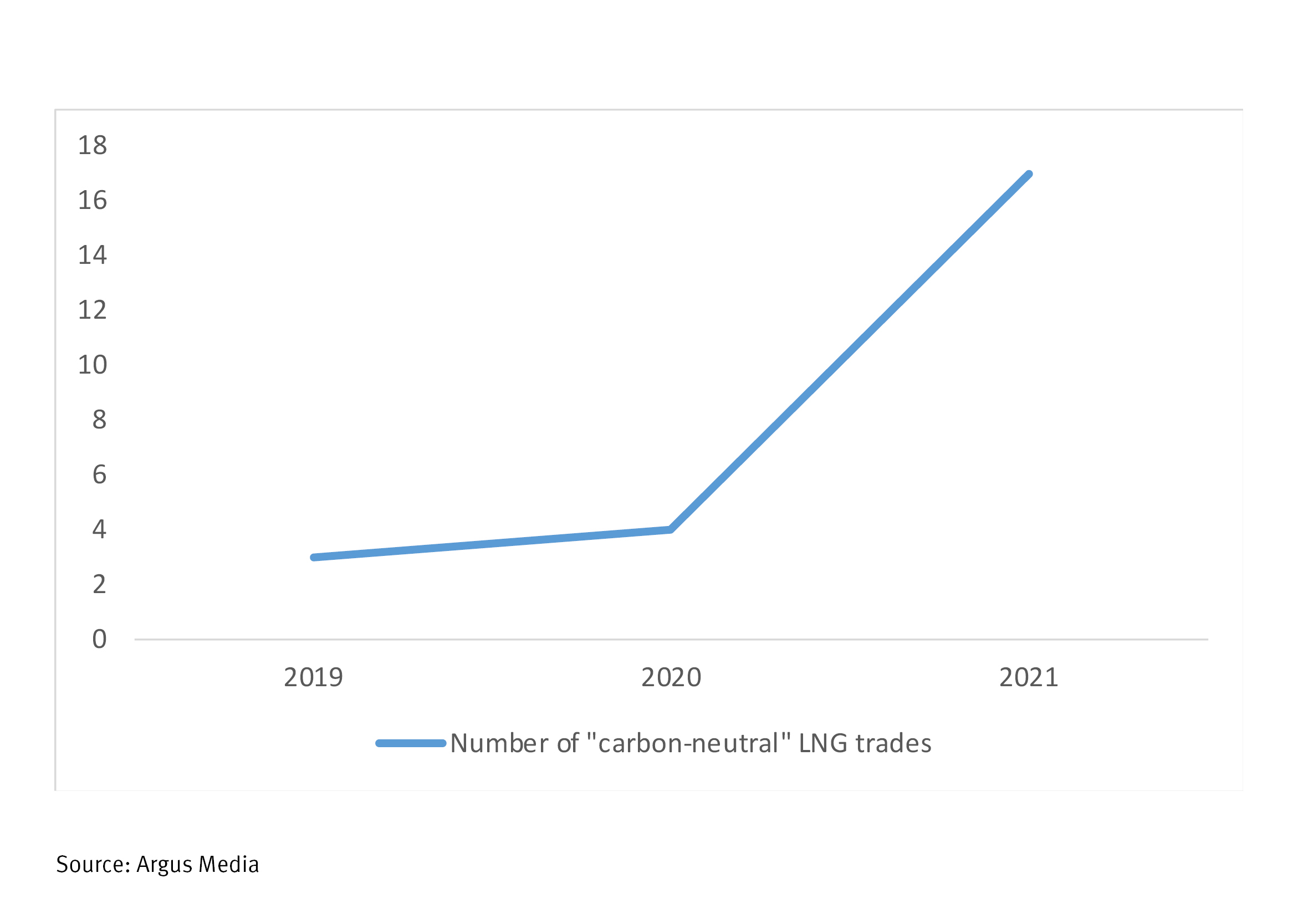 But the market remains a very illiquid one, with “carbon-neutral” LNG constituting no more than 11pc – a very slim portion – of all spot LNG transactions for deliveries to northeast Asia this year, according to Argus data. 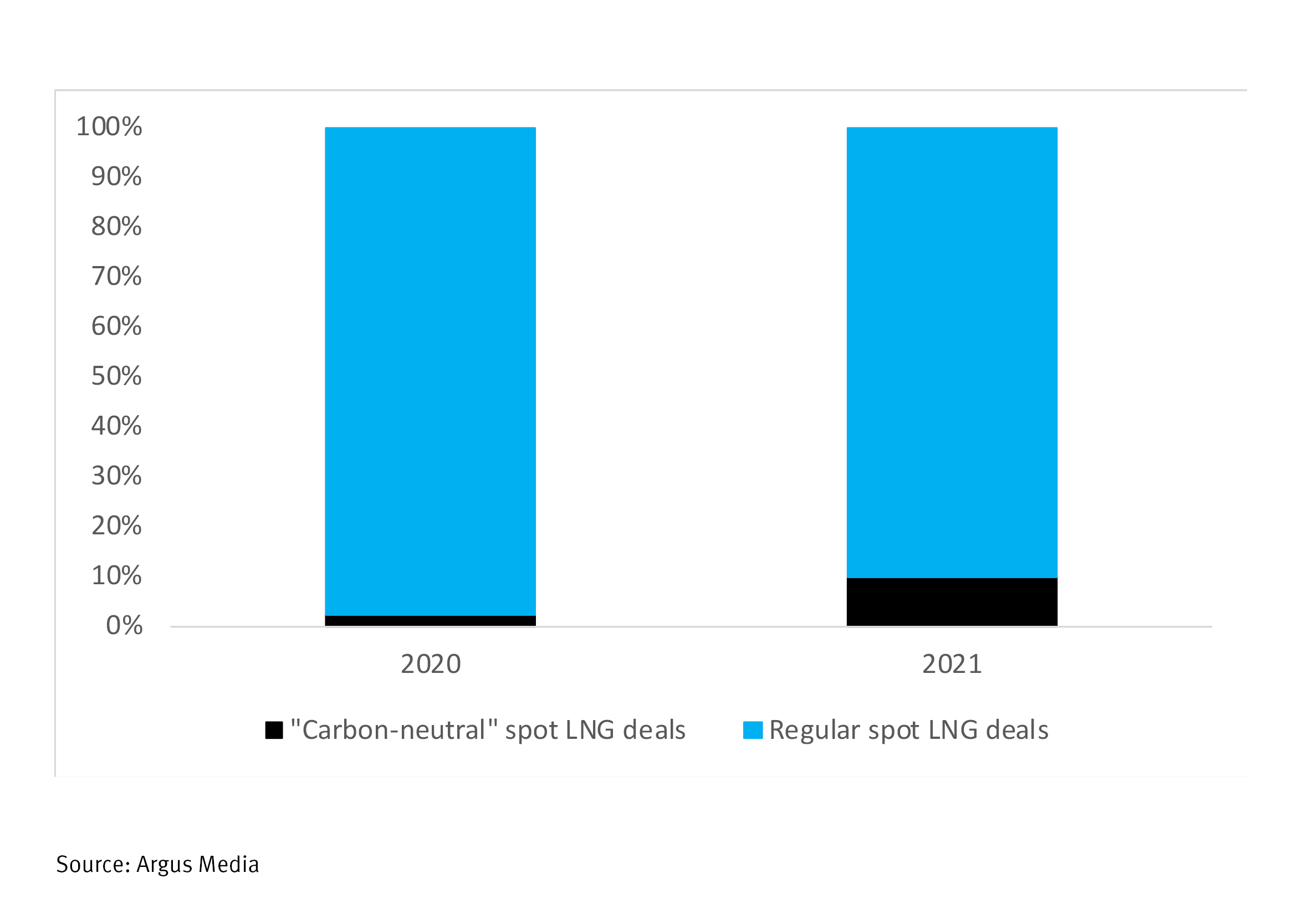 The Japanese have been the most active buyers of “carbon-neutral” LNG, in line with the country’s 2050 carbon-neutral goal and calls from downstream customers for cleaner energy options.

Japan's city gas supplier Tokyo Gas and 14 firms across different industries established the Carbon-neutral LNG Buyers Alliance in March to promote the awareness and use of “carbon-neutral” LNG. The 14 companies have signed agreements to purchase “carbon-neutral” city gas from Tokyo Gas, reflecting strong consumer support for such initiatives.

South Korea and China have also set targets to reach carbon neutrality by 2050 and 2060, respectively. Countries like India, for instance, have presented a longer time horizon, aiming to reach net zero emissions by 2070.

The nature of the carbon credits purchased to offset emissions is probably the most problematic aspect of “carbon-neutral” LNG, as there is currently no oversight from governments or an authoritative body to ensure that the promised carbon savings are actually delivered.

Several organisations operate registries from which firms can acquire carbon credits. And while some of these registries are managed by renowned and credible standard-setting organisations such as the Gold Standard, other organisations employ less stringent assessments and may offer offset projects that do not satisfy specific attributes or environmental standards. For instance, some firms have opted for cheap offsets from projects that support brush clearing or the preservation of trees — and while these projects do prevent a rise in emissions, any actual removal of carbon from the atmosphere is very limited. Given that the true efficacy of these carbon offsets cannot be accurately established, measuring and determining their value becomes a tricky task.

A lack of transparency and standardisation in monitoring, reporting and verifying emissions is another complaint about “carbon-neutral” LNG, and for good reason. The lack of an industry-wide, consistent methodology to quantify emissions and offsets means that there is ambiguity in ascertaining the true extent and significance of the environmental impact associated with “carbon-neutral” LNG.

For instance, several “carbon-neutral” trades have come under scrutiny as the “carbon-neutral” tag on these deals relate to just scope 1 and 2 emissions, which are emissions produced from the extraction and liquefaction process in LNG production. But they do not offset the more significant scope 3 emissions, which are emissions generated when the gas is burnt by consumers and account for the bulk – around 70pc – of the total carbon footprint.

For example, BP in September delivered to Taiwanese state-owned CPC what it described as a "carbon offset" LNG cargo, but only the CO2 and methane emissions associated with the LNG cargo from wellhead to discharge terminal were offset. This means that the credits only covered emissions generated from the cargo’s production to delivery, ignoring the significantly more polluting combustion process.

An example of a “carbon-neutral” LNG deal that covers scope 3 emissions is Japanese utility Toho Gas’ purchase of a cargo from Japanese upstream firm Inpex that was delivered in September from the 8.9mn t/yr Ichthys LNG plant in Australia. Greenhouse gas (GHG) emissions associated with the LNG cargo across the entire natural gas supply chain, including upstream production, liquefaction, transportation, regasification, marketing, and combustion by customers in Japan, were offset using carbon credits that meet the Verified Carbon Standard, a programme for certifying carbon emission reductions.

Some hope may be emerging in this area soon enough. The International Group of LNG Importers (GIIGNL) and their 86 member organisations on 17 November announced the launch of the Monitoring, Reporting, and Verification (MRV) and GHG Neutral Framework, which it said provides for the first time a “transparent and credible approach to reporting GHG emissions across the entire value chain”.

The framework provides a consistent definition of “GHG-neutrality” for LNG cargoes, sets out criteria for project selection and offset type, and recommends the disclosure of offsets in carbon statements and demonstrations that offsets are cancelled or retired in a third-party registry.

But it is too early to tell if this framework is sufficient to allay critics’ concerns.

Cost is another potential impediment to the wide-scale adoption of “carbon-neutral” LNG. A “carbon-neutral” cargo can add considerable cost to an LNG’s buyer’s import bill, especially when there is a lack of monetary aid or policy support from the government to encourage such purchases. This is particularly so in a high-priced market environment, such as this year when prices hit a record high in early October of over eightfold its level a year ago , with buyers likely to be even more hesitant about forking out additional costs.

For the above reasons, “carbon-neutral” LNG may be deemed a somewhat unsatisfactory form of clean energy, and with such a reputation it is not difficult to see why firms claiming to support and embrace “carbon-neutral” LNG have sometimes been levelled with accusations of greenwashing. Instead of solving the very problem it promises to rectify, “carbon-neutral” LNG may have deepened the divisions between these corporate firms and climate activists, both of which are scrambling to find solutions to their problems.

So what are the alternatives?

While there are currently a respectable number of alternative solutions available, some have gained more political traction than others and shown the most potential for adoption.

An alternative to conventional LNG is bio-LNG – a methane-rich biogas produced during the anaerobic digestion (AD) process, when organic matter such as food or animal waste is broken down in an oxygen-free tank. While the chemical composition of both forms of LNG is largely similar, bio-LNG is a renewable fuel that results in far less carbon emissions and pollutants during its production process. An obvious drawback of this alternative is the conditions required for its production, meaning that producing it on a large scale will be difficult infrastructurally and financially, particularly for less affluent nations relying on LNG as a significant power generation source.

Another option would be blue hydrogen, which is obtained by splitting natural gas into hydrogen and carbon dioxide via steam methane reforming or auto thermal reforming. The carbon dioxide is then captured and stored.

Carbon capture utilisation and storage (CCUS) technologies are among the most promising options at present. Such technologies aim to capture carbon dioxide emissions at the source or from the air, before transporting them away either for underground storage or transformation into other useful products.

The drawback of such technologies is that they are prohibitively expensive. While some firms may voluntarily opt to bear the additional costs as part of their efforts to slash emissions, others may be more incentivised to pay for carbon capture if it is presented as an alternative to carbon taxes. More widespread adoption of emissions trading scheme mechanisms of carbon taxes could facilitate investments in carbon capture and storage, thereby helping to drive costs down.

Where does this leave us?

LNG is likely here to stay – at least in the near term – as cleaner alternatives are dogged with issues related to intermittency and affordability. And "carbon-neutral" LNG just might be our best bet at this point to help countries attain their net zero targets. What is crucial for the successful takeoff of this development and prolific adoption of "carbon-neutral" LNG is the implementation of a transparent framework to quantify both emissions and offsets, and perhaps more importantly, commitment and discipline by both buyers and sellers to adhere to such a framework.

CCS and blue hydrogen – how are regulators and markets positioning themselves?

Hydrogen is a central pillar of the IEA’s pathway toward net-zero.