US Gulf clean product exports have remained slow in the wake of Hurricane Ida, keeping MR tanker rates across the Atlantic basin under pressure, despite solid volumes flowing from Europe to the US.

Around 500,000 b/d of refining capacity reportedly remains off line or partially off line in Louisiana in the wake of Hurricane Ida — which made landfall on 29 August shutting down the majority of US Gulf refining capacity. This includes Shell’s 250,000 b/d Norco refinery, which began a weeks-long restarting process on 9 October, and Phillips 66’s 250,000 b/d Alliance refinery in Belle Chasse, which remains shut down.

These shutdowns, combined with higher US domestic demand, have weighed on US Gulf product exports. Just 5.24mn t of clean products were shipped from the US Gulf in September 2021, down from 7.26mn t in August, analytics firm Vortexa data show.

The shrinking US Gulf exports have led to more MRs returning directly to Europe after delivering cargoes to the US, rather than ballasting to the Gulf to collect another cargo. The resulting supply pressure in Europe has prevented rates from increasing in the region, despite solid chartering activity.

Demand on the important Europe to US gasoline route in August and September was considerably higher than the same periods in 2019 or 2020. This was supported by rising US gasoline demand, which grew to 9.43mn b/d by the beginning of October from 8.89mn b/d in the middle of September, EIA data show. Demand for tankers has remained strong in October with nearly 30 MRs booked from Europe with options to the US already this week. 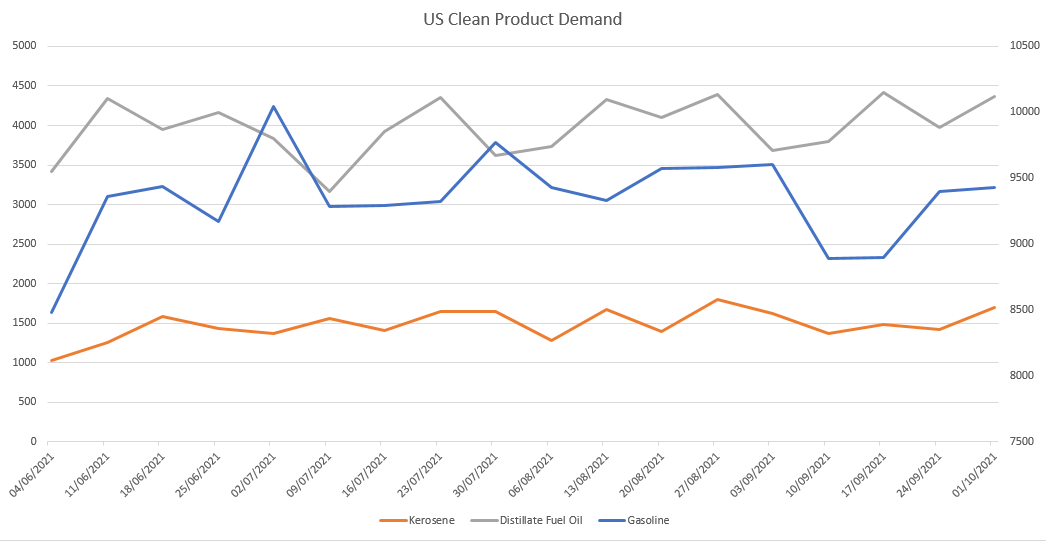 But, despite this demand, the increase in ships ballasting back from the US, and the lack of tonne-mile demand in the Atlantic basin as a result of lower US Gulf exports, has caused European MR rates to fall. The UK Continent to US Atlantic coast rate MR has averaged just $12.89/t in October, down from $13.17/t in September and $15.11/t in August.

The rate did rise by WS10 points to WS110 for a US Atlantic coast voyage on 14 October but it took more than 30 MR fixtures earlier in the week to generate sufficient momentum for even this small movement. 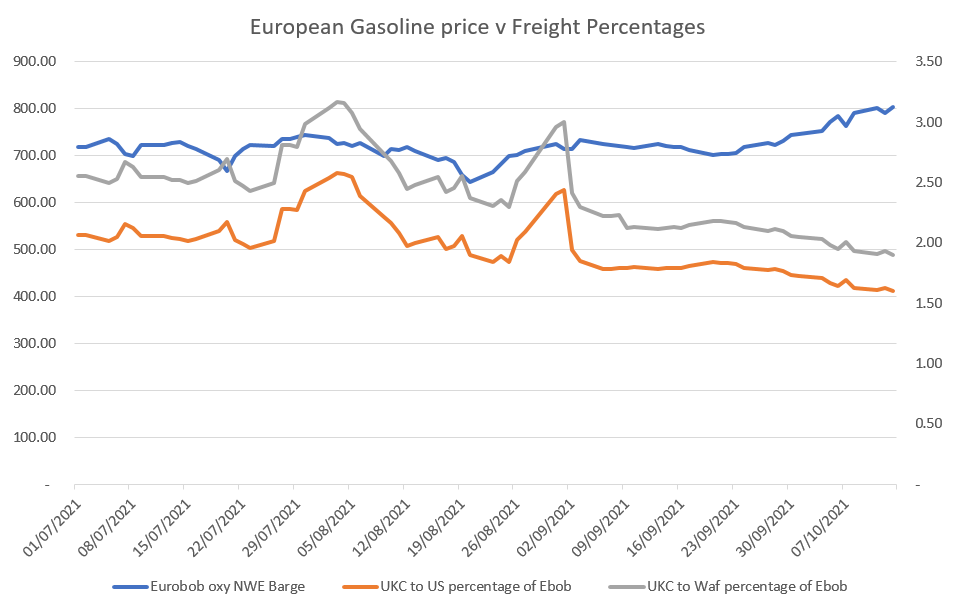 The slide in MR rates will be particularly tough for shipowners to bear, considering rapid gains in bunker prices in October.

This will squeeze shipowners’ earnings, as weakness in the market has prevented them so far from passing on the increase to their customers. Time charter equivalent (TCE) revenues for MR journeys from the UK Continent to the US or west Africa are reportedly at or close to zero.

The other impact of lower US Gulf exports on the MR tanker market has been the disappearance of the typical WS5 point premium for UK Continent to west Africa, compared with UK Continent to the US Atlantic coast.

Shipowners typically accept lower rates to sail to the US, because of the opportunity to pick up another cargo from the US Gulf, allowing them to undertake two paid voyages. Ships that deliver to west Africa typically have to return to the Mediterranean or sail elsewhere to secure a new cargo and often charge a slight premium as a result.

But the shortage of cargoes from the US Gulf and overall pressure on the market has brought these two routes into parity, with shipowners unwilling to discount for a trip to the US.

MR cargo volumes from Europe to west Africa have been solid in October, with around 360,000t shipped already this month, up from 500,000t in September and 534,000t in August.

But, as with the transatlantic route, supply pressure in Europe has prevented this from lifting rates, even despite the jump in bunker fuel prices. 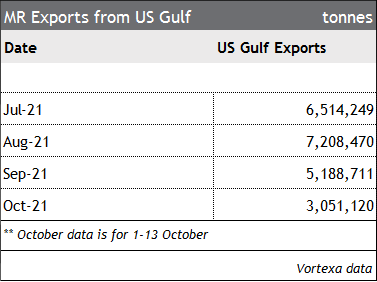