In this episode of The Crude Report, market reporter Benjamin Peyton explains how US West coast demand is affecting ANS flows to the Asia-Pacific and what is happening at home in Alaska that could ultimately affect production.

Jessica Tran: Hello and welcome to the Argus Crude Report, a podcast series on global crude oil markets. This is Jessica Tran for Argus Media.

On this episode, we'll be covering the Alaska North Slope, or ANS, crude oil, specifically looking at how ANS cargoes continue to be exported to countries in the Asia-Pacific. Joining me to do that is Benjamin Peyton, our reporter that covers North American waterborne markets and the west Coast, also heading up ANS coverage. Ben, thanks for joining me today. Could you maybe start by explaining what we have been seeing on ANS exports recently?

Benjamin Peyton: Hi, Jessica. Sure. ANS is a domestic medium sour that is primarily consumed by refiners at the US west coast, but sometimes we see ANS exported to countries in the Asia-Pacific and that trend has continued this year from last year. 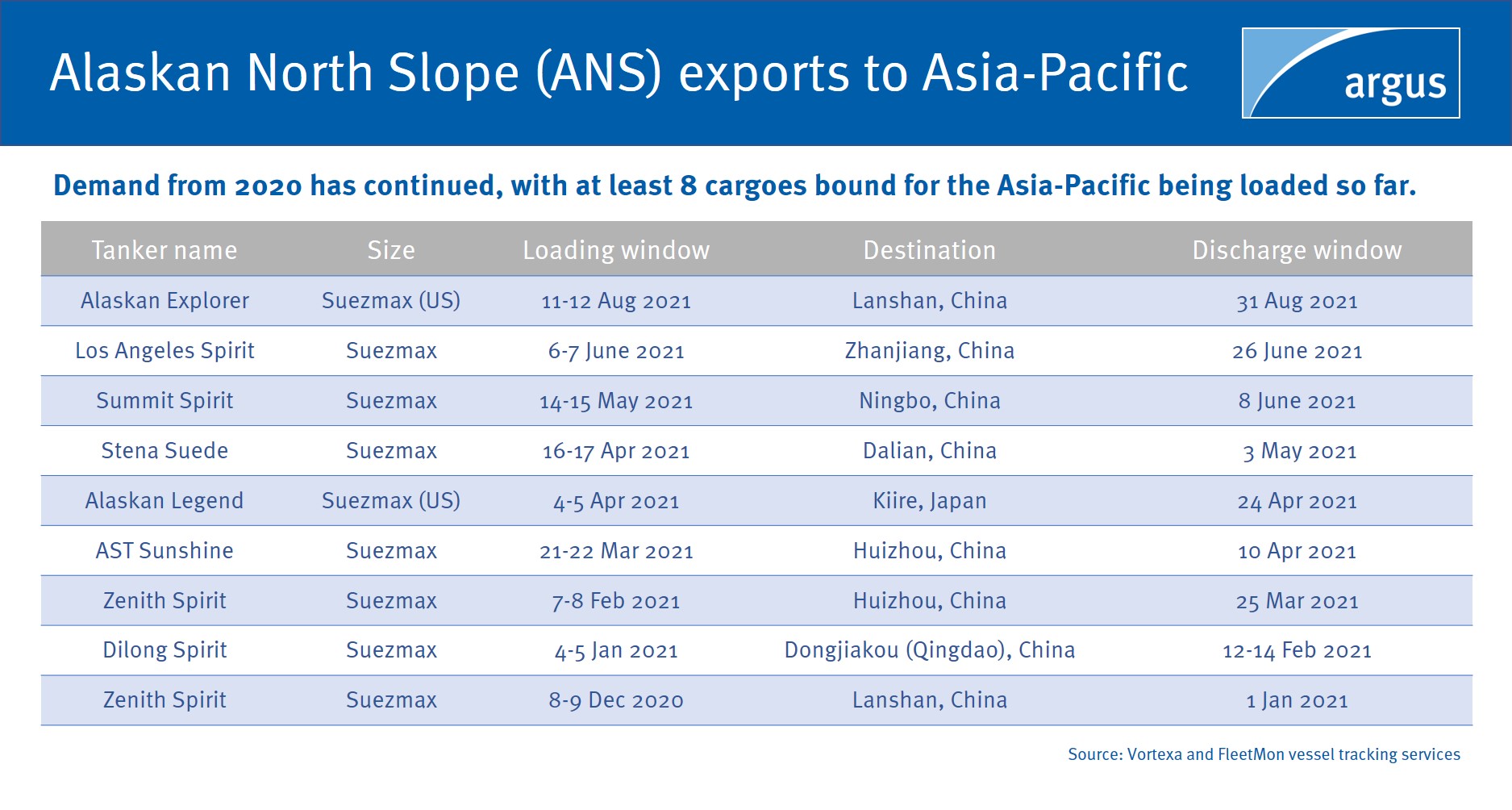 We saw the uptake in international demand really started last year during the Covid-19 pandemic and during the first wave of lockdowns at the US west coast where demand was pressured by travel restrictions. Refinery demand at the US west coast has rebounded since March of last year, though it still lags behind pre-pandemic levels, which could be supporting the flow of ANS to the international market. The latest cargo that we saw was loaded in mid-August and discharged in China later the same month, which has been the top taker of ANS exports over the last two years.

Jessica: So, what are some of the other things that are different this year compared to last year?

Benjamin: Well, we did see that Japan took its first cargo of ANS in nearly five years and that happened in April of this year, so that is something new that we saw this year. And then what we've seen continued from last year has been that China has taken the other seven export cargoes we've seen so far this year. They took 11 cargoes of ANS last year, and so they are on pace again to be the top taker of ANS, so that has been consistent. But also, we've seen that there has been chartering for US flag Jones Act vessels to be used for exports of ANS, which is not something that we see on a typical basis.

Jessica: And can you explain what's driving the continued demand for ANS in the Asia-Pacific?

Benjamin: There is not typically a spot market for ANS as most of the cargoes are processed at the US west coast and they are typically under long-term contracts, so export demand of ANS is partly driven by lower crude demand at the US west coast. And as we saw last year and into this year, demand has fallen faster than supply has, which has led to an imbalance in the market at the US west coast. ANS shipments to the west coast were around 401,000 b/d in the first half of this year, 10,000 barrels per day lower than where it was last year, and it's about 40,000 b/d lower than two years ago before the pandemic impacted the market.

The other thing that could be driving the continued demand for ANS in the Asia-Pacific is the limited chartering activity at the US west coast, which has pressured the rates for Jones Act-compliant vessels that are typically used for domestic movements of ANS to the US west coast. So US flag vessels, since they typically carry a premium compared to international tankers for long-haul shipments, it can be an indicator of lower demand when you see that Jones Act vessels are being used for long-haul shipments.

Jessica: And I guess going back to where ANS is produced, is there anything happening at home locally in Alaska that would affect ANS crude?

Benjamin: Yes. Also this year, for the first time since the start of the pandemic, we saw maintenance was scheduled for the trans-Alaska pipeline system in Alaska. This is the 800-mile pipeline that shuttles crude from the North Slope of Alaska down to the Port of Valdez where it can be loaded onto a tanker. This plan maintenance caused a drop in output of around 70,000 b/d to 403,000 b/d in July. So during the lower demand environment at the US west coast, we saw that this could take some of the slack out of the supply and we saw that exports in July during the maintenance season halted after 11 straight months of demand.

Jessica: So how does the production of ANS impact its exports?

Benjamin: Well, the pressure on supply limits the amount of crude that can be marketed internationally. Again, the US west coast is under typically long-term contract with ANS. Around 20% of the US west coast refinery inputs come from ANS, so whenever we see that production is rising and there's an excess of supply, more crude could be displaced from the domestic market and placed into the international market as we've seen with cargoes going to the Asia-Pacific.

Jessica: So is there anything happening now that could impact ANS exports in the long term?

Benjamin: We could see a different refinery environment at the US west coast, which would impact ANS and ANS exports. Marathon Petroleum progressed on a planned conversion of its former 166,000 b/d Martinez refinery in California – it'll be switching to renewable fuels production and will no longer process crude. Also, Opec+ continues to increase production under the group's current output policy, which could increase competition for ANS at the US west coast because ANS still competes in the international market and the waterborne market there at the west coast. We saw that, according to the latest trade data, that Russia was the second-largest supplier of crude at the US west coast – this was in June – and Saudi Arabia was third, and then Canada was the top supplier on the month.

And on the export side, we could also see ANS export demand being supported by the interim trade deal signed by Beijing and Washington in January of 2020. This included commitments measured in dollars to purchase US energy products. We saw that China took an estimated 12.2mn bls of ANS last year from nearly 2mn bls in 2019. China, under the terms of the Phase One deal, had agreed to more than double its energy purchases from the US last year from 2017 levels, and then to further double it again this year. This commits China to buying around $69 billion of US energy commodities over the last two years. The agreement also noticed that purchases will be made at market prices based on commercial considerations, which means that the amount of supply then could be dependent upon the price of ANS.

Jessica: Thanks for taking the time to update us on ANS, Ben.

If you're in need of more in-depth daily coverage of US crude oil markets such as ANS, consider subscribing to Argus Americas Crude. You can find more information on the service at www.argusmedia.com. Thanks for tuning in and we look forward to you joining us on the next episode of The Crude Report.

The Crude Report: Hurricane Ida's impact at the US Gulf coast

Hurricane Ida landed along the Louisiana coast on 29 August 2021 as a category 4 storm, affecting not only the region’s refineries but also offshore production operations of a lot of the country’s medium sour crude oils.

Exports of west African crude to Asia-Pacific refiners plummeted to 1.7mn b/d, amid the spread of the Covid-19 Delta variant, low import quotas in China and refinery shutdowns in India.

Next week’s Opec+ meeting will focus on the next production quota increase, a critical decision that will affect global crude oil prices.