But are these drivers enough or could this recovery be tampered by lockdowns from further mutations of the Covid-19 variants?

The winter season typically brings joy to ship owners, not because of Santa’s presents, but because of increased shipment volumes. Higher demand for oil during the fourth quarter is usually driven by increased energy consumption from heating requirements.

Setting aside 2020, which had the "double black swan" events, the average seaborne oil products export volume from north Asia (China, Japan, and South Korea) in 2018 and 2019 were higher in the second half than in the first half, according to the oil analytics firm Vortexa data. In 2021, northeast Asia freight rates began to decline from the end of May, and remained subdued at historically low levels in July after China implemented a tax reform on imported light cycle oil and mixed aromatic, blending material for gasoil and gasoline.

But freight rates quickly picked up in August as export volumes from South Korea rose, as domestic demand had fallen following a surge of Covid-19 cases. Rates were also buoyed by reduced vessel supply in the region. Inclement weather and typhoon formations, and China’s implementation of quarantine protocols for international ships, to prevent the spread of the Covid-19 Delta variant, all delayed and disrupted vessel schedules at sea and at ports.

Looking forward, freight rates for clean tankers in northeast Asia could rally. The average shipment volume from July-August 2021 lags the average 1H volumes in the year, which could mean increased shipment volumes for the rest of the year. 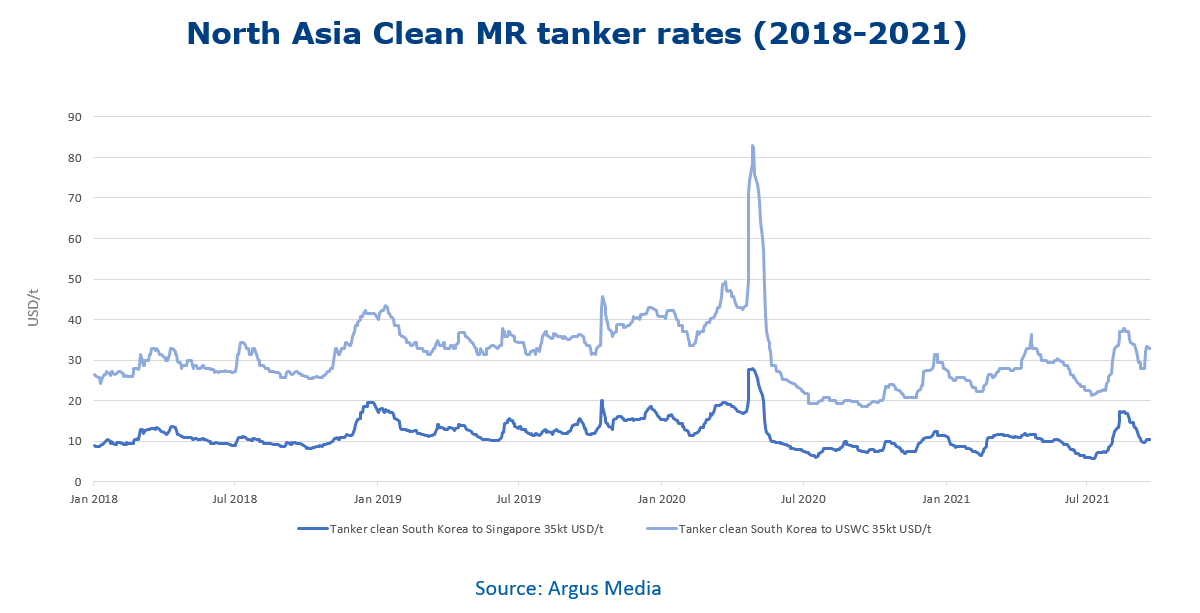 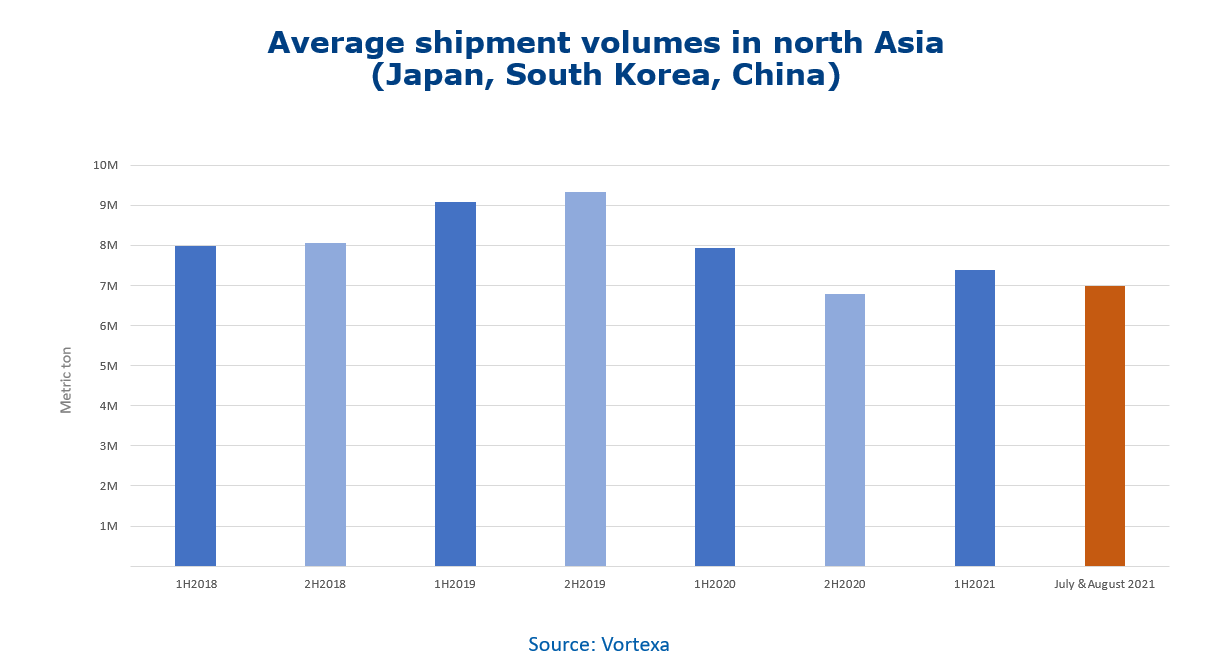 Refineries in the Asia-Pacific region are gradually becoming the oil products hub across continents in view of the closure of some refineries in the west of Suez and Australia.

Arbitrage economics from north Asia to the US west coast and Latin American countries in July-August incentivised jet fuel shipments on MR tankers that had low freight rates. Inventory levels in the US were at a historical low in August and with an open arbitrage window, the US became the top export destination for South Korea’s MR shipments.

Export volumes from China have also risen, since China issued its second oil product export quota in August. Jet fuel is likely to be the targeted oil product for export, as Chinese authorities have banned jet fuel sales to non-aviation sectors in a further clampdown on the gasoil blending sector that absorbed up to 25pc of China's jet fuel production. Jet fuel supply is also likely to be in surplus, as international flights to and from China remain limited as China has not relaxed its stance on international travel and retains its zero tolerance Covid-19 policy.

Regional shipping demand is likely to rise as the surplus of jet fuel find homes. Vietnam, South Korea, and Japan are the top three export destinations for jet fuel, based on Vortexa’s data from January 2018 to August 2021. Tonne-mile-demand could be boosted further if there are arbitrage opportunities and if China’s jet fuel volumes are exported to the US. Demand is also higher as Japanese refineries complete maintenance and with higher oil product yields since August, following higher run rates.

Arbitrage opportunities have recently emerged from northeast Asia to Europe. But shipments on these routes moved on larger vessels, such as LR2 or newly built VLCC to move diesel and gasoil from east of Suez to Singapore or the UK, which reduced tonnage supply for those vessel sizes in the region. These tran-continent long-haul routes have also significantly accounted for tonne-mile-demand.

But these expectations could easily be curtailed as the Covid-19 virus continues to mutate.

The first authorised Covid-19 mRNA vaccine by Pfizer-Biontech was launched by the end of 2020. Lockdowns had begun to ease when the Delta variant emerged, which caused many Asian countries to tighten social restrictions in 1H2021. It remains unknown how effective the vaccine will be against further strains. A mutated variant called “Mu” was discovered in South America recently, reportedly more vaccine-resistant.

Should vaccines prove insufficient, and another global outbreak of the virus ensues in 2H2021, governments could once again ramp up restrictions on travel and local activities, which could reduce oil demand and weigh on the shipping market.

The Singapore government had planned on a gradual re-opening in July, but the recent spike in Covid-19 cases halted progress. "We do not intend to make any new opening moves at this juncture, because there is a time lag between the onset of infections to serious illness, and so we want to take some time to monitor the situation," said Lawrence Wong, finance minister and co-chair of the country’s Covid-19 multi-ministry task force on 3 September.

Weighing the past to understand the future: Aframax outlook 2H 2021

The Aframax tanker market outlook looks quite bleak for the rest of 2021. Struggling ton-mile demand and uncertainty around the global pandemic are weighing heavily on the overall sentiment for the market. Extra pressure is coming from the abundance of tonnage in both A...