Voluntary carbon markets are becoming a familiar feature in corporations’ efforts to offset emissions, with “carbon farming” being a nascent but promising sector in this context. What is the potential for this market and what challenges do we foresee in its widespread adoption?

Emissions markets are a well-known reality in several countries, but while only a few jurisdictions such as the EU, Alberta in Canada, and the US state of California currently operate mandatory carbon markets, most of the efforts made in other regions by corporations to offset emissions are conducted on a voluntary basis. These form an increasingly important part of the effort to meet the targets of the Paris Agreement, but not without significant challenges.

Voluntary carbon markets provide corporations with a tool to offset part of their carbon emissions by purchasing carbon credits, which are generated by projects that remove or reduce GHG emissions. Credit buyers can access the voluntary carbon market by purchasing credits directly from project sponsors, as part of structured local schemes (such as Australia’s ACCUs), or through voluntary carbon credits marketplaces such as South Pole and in the future Singapore’s Climate Impact X that is scheduled to launch at the end of 2021.

The importance of the voluntary carbon market is not limited to corporate ESG imperatives. As carbon pricing grows it could be an important tool for project financing, especially for projects that promise to deliver negative emissions, which will be essential to reach increasingly ambitious net-zero targets.

The voluntary carbon market is expected to reach a record high in 2021, with almost 250mn t of CO2-eq of credits issued at the time of writing, an increase of over 30pc year-on-year. A similar trend was observed for retired credits. Retired credits are purchased by consumers and “retired” to avoid any potential future double counting. 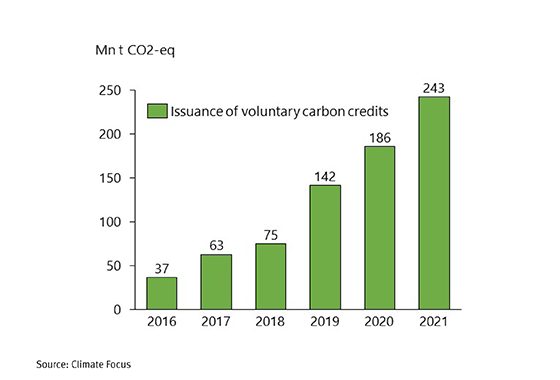 We must note that the voluntary nature of this business also means that the current status of voluntary carbon markets can be at best described as fragmented, and at worst opaque and in some cases even ineffective. But companies worldwide across a wide range of sectors have shown interest in tapping voluntary carbon markets in an attempt to reach their carbon neutrality goals, and the recent surge in interest is also driving the need for more transparency and integration.

The voluntary carbon market segment that has been receiving substantial interest, but that also often finds itself in the crosshairs of detractors, is the “nature-based solutions” carbon business. These are projects that focus on nature conservancy (such as reforestation), agriculture-focused projects that aim to use soils as a carbon sink (“soil carbon”), typically involving practices such as regenerative agriculture.

The “carbon farming” business is particularly interesting due to its theoretically huge potential to store carbon, and achieve the much-needed negative emissions. Although agriculture is “only” responsible for around 5pc of global annual emissions (this is referring only to soil/crop-related emissions, and excluding animal farming emissions), there is a large body of academic literature that suggests that soil carbon would have to potential to sequester up to 10pc of total annual emissions. 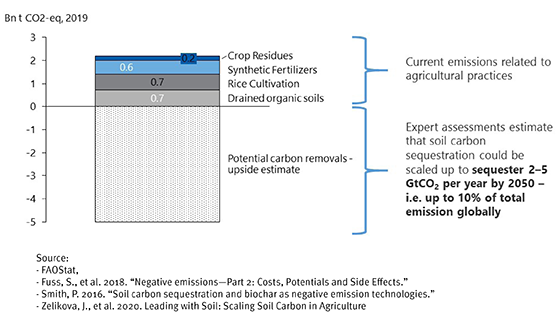 As a result, incentivising farmers to sequester carbon dioxide from the atmosphere and store it in the biosphere as soil organic carbon is considered a growth area in voluntary carbon markets:

Despite the potential, the current market for soil carbon-based voluntary credits is almost non-existent, as shown below. Agriculture-related carbon project currently amount to around 2pc of total credits issuances so far. 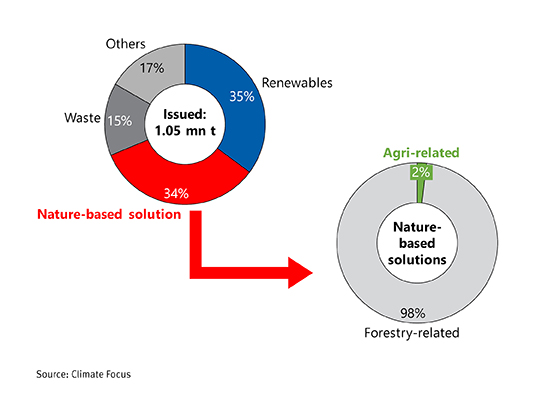 One of the issues that is affecting the widespread adoption of agriculture-related carbon schemes is scalability. Most of these soil carbon schemes are located in North America and Australia, where farm sizes are on average much larger than Asia or Europe. Large-scale farms allow for a more efficient rollout and monitoring of soil carbon schemes.

New entrants have set up carbon programmes to meet potential demand. Leading agri-input firms (including Yara, Nutrien, Bayer, Syngenta) have announced their intention to leverage their market positions to develop carbon programmes or other related investments.

This market is very much in its infancy, with most announced participants still in development/pilot phases. What is becoming very clear is there are vast differences in how market participants are approaching key elements of their carbon programs, most notably in the threshold criteria for signing up farmers (“additionality”), how long the SOC must be stored in the soil (“permanence”), and the rigour and precision with which the amount of carbon sequestered is measured.

The degree of differentiation seems driven by varying perceptions on making programmes attractive to farmers while also ensuring the output carbon reduction units are highly valued by consumers.  Without any clear guidance by governments (a common feature currently in most commercially-focused aspects of sustainability and energy transition), this will play out over time.

The rigour in the design and implementation of methodologies is also becoming a crucial aspect that will affect the ability to roll out these schemes across different geographies and generate a substantial amount of tradeable credits, as well as their market acceptance.

Recent examples of criticism of schemes based on nature-based solutions, and which involved the public dissecting of the methodologies and assumptions used in various high-profile deals, including:

The market is currently very developmental and fragmentary in nature. This represents both an opportunity for market participants and a risk, given the potential reputational fallout from any shortcomings in case methodologies are not adequately sound and are scrutinised in the media. Effective program and methodology planning, and effective Measurement, Reporting and Verification (MRV) of emissions and emissions reductions is perhaps the most critical factor for the establishment of a viable business in this sector.

Weight of Freight — Weighing the past to understand the future: Dry bulk outlook 2H 2021

Iron ore prices have tumbled to less than half their record high in May, squeezed by demand cuts in China and margin pressures from metallurgical coal prices soaring to unprecedented levels.