Coal, gas and power prices across Europe and Asia have surged for the second time in a year and are now two to five times higher than they were pre-pandemic. Gas prices have seen the steepest rise, suggesting widespread switching to coal or oil this winter where fuel flexibility exists.

Though in less dramatic fashion, crude prices are also moving higher, with Brent currently toying with $80/bbl. Market focus has turned to some Opec+ members reportedly unable to achieve in full their scheduled unwinding of April 2020 production cuts. With nuclear talks between Iran and the P5+1 countries on ice, and with US shale for now remaining in hibernation, oil seemingly confronts its very own supply chain bottlenecks, just like those that have afflicted the rest of the global economy for many months.

As energy supply was unable to immediately respond to collapsing demand in first-half 2020, accordingly last year’s slump in upstream investment, together with project delays, and manpower and equipment shortages along the value chain, are now hampering the supply rebound needed to meet resurgent demand. In Europe, the pre-winter energy crisis has been exacerbated by a September lull in wind power availability, bidding up the price of gas and coal as the region competes with red-hot Asian import demand. 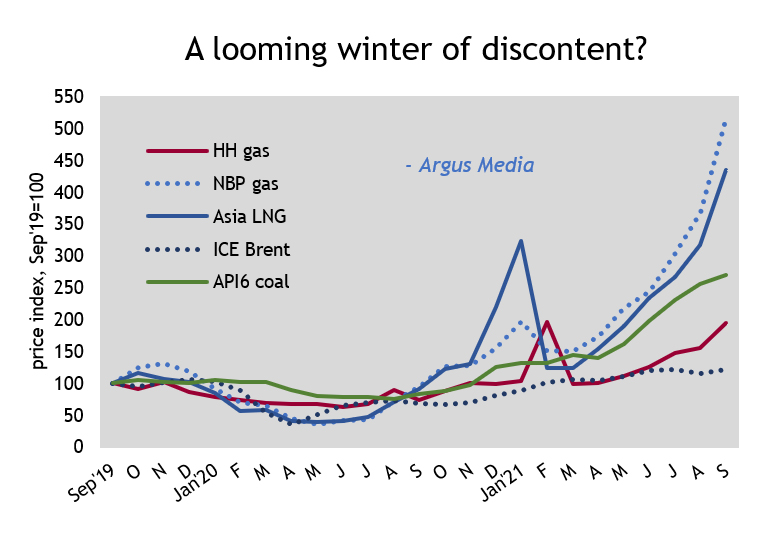 With investment in hydrocarbon storage and logistics infrastructure now seemingly accorded lower political priority than green energy spending, so the prospect of price spikes and inflationary pressures will only grow. An energy transition solely driven by diverting supply-side investment away from hydrocarbons towards renewables, without parallel demand-side adjustment, risks leaving consumers hostage to repeated bouts of price volatility.

With low levels of gas in European storage, consumers this winter must hope for less intermittency from wind power, and that temperatures remain comparatively benign. For 2022 and beyond, the risk is that a cold winter and sustained high gas and power prices now eventually feed through to inflation levels that persuade central banks to hike interest rates earlier than originally planned. Indeed, end-2021 headline inflation for both the US and Europe may be headed towards 4%, around double central bank target levels. Both the US Federal Reserve and the Bank of England now look primed to taper or end their QE programmes in the months ahead, and both also now have higher interest rates in the cross-hairs for 2022.

Adding to this heady mix of uncertainty are the chronic debt problems confronting China’s property sector, which is responsible for 25% of GDP, and its very own winter power and coal supply crises. These in turn are leading to temporary power plant, steel mill, factory and refinery shut-downs. Forecasts for China’s fourth quarter and 2022 GDP growth are starting to be revised down accordingly.

The Bank of England Governor Andrew Bailey last Monday characterised the coming months as likely to represent “the hard yards” of the economic recovery, much more difficult than a comparatively “easy” initial phase of activity rebound now fading in the rear-view mirror. While he was largely referring to the UK economy, for some emerging economies, still ravaged by the ongoing effects of the pandemic, that prognosis might look rather premature.

Across the global economy, and now increasingly within the oil and energy sectors, short-term supply chain bottlenecks, whatever their cause, will likely keep winter prices high. That may be good news in the short-term for oil and gas producers, but it raises concerns about a global economic recovery already losing momentum due to labour and raw materials shortages. Some drivers of inflation now appear more entrenched, and less transitory, than initially believed. Central banks will need to tread carefully, however, to avoid choking off the nascent global economic recovery, not least in the high-debt emerging markets that drive global oil and commodity demand growth.

From the Economist's Chair - Covid-19: Anatomy of a crisis and identifying the new normal

In this edition of From the Economist's Chair, David Fyfe is joined by Conor Browne, an independent consultant specialising in biosecurity, to examine the Covid-19 pandemic's progress to date, and how policymakers might prepare for similar episodes in the future.