Often the primary trade driver in the first quarter of 2022, South American grains fueled relatively strong Panamax markets in the Atlantic and Pacific basins as the weight of freight – the freight cost as a percentage of the delivered price — increased for Panamax vessels overall. The larger Capesize bulkers, meanwhile, struggled to keep their heads above water.
Evidence of the strength of Panamaxes in 2022 compared to Capesizes is shown in the following charts: 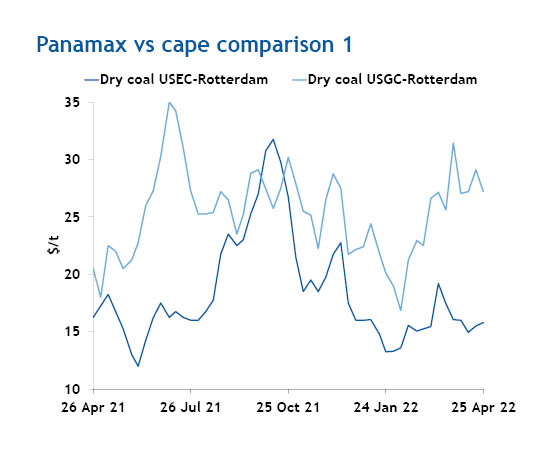 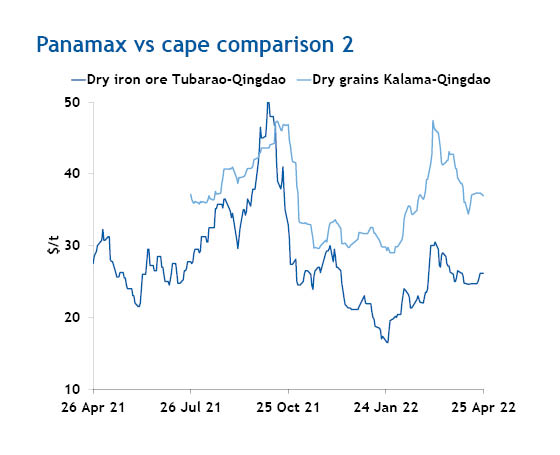 For the last three years, fleet utilization data from AXSMarine shows that nearly three quarters of all Capesize cargoes were comprised of iron ore, with coal making up most of the remainder.
The lion’s share of iron ore carried by Capesize bulkers is sourced from Brazil and Australia. Both countries struggled with heavy rain seasons this year, while Australia’s reduced output was exacerbated by less productive, aging mines and Covid-19 workforce absenteeism. Meanwhile, Chinese imports of Australian iron ore dropped nearly 1.5pc in the first quarter of 2022 compared with 2021, while imports of Brazilian iron ore dropped by a substantial 24pc.
With reduced demand for fewer available cargoes, Capesize owners in both basins have struggled to find a market that wasn’t oversupplied with competitors since the start of the year.

AXSMarine fleet utilization data shows Panamax bulkers favored coal for the past three years, making up just over 50pc of all cargoes. Grain cargoes come next at around 33pc, with ores making up most of the difference.
When we look at the spot fixtures reported in the first quarter of 2022, however, we see that Panamax fleet utilization in the spot market has centered on grain cargoes. 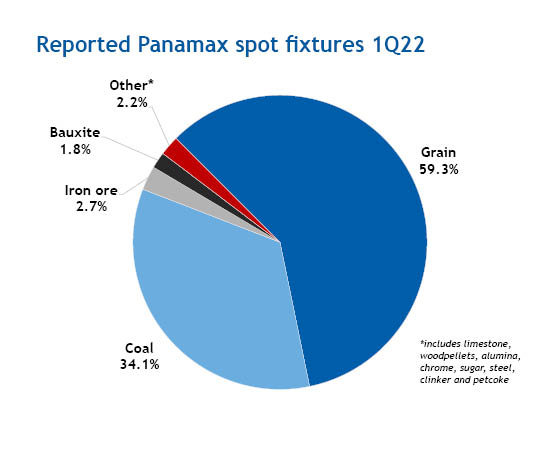 This suggests that Panamax fleet utilization in the spot market has centered on grain cargoes in the first quarter of 2022.

One might ask “Why don’t Capesizes just start carrying grain?” That is exactly what their owners are asking. Reports of Capes, ostensibly mineral carriers, fixing grain cargos have already surfaced. In fact, one of the biggest sources of downward pressure on Panamax rates in an otherwise strong Panamax market has been the reintroduction of Capesizes competing with the smaller bulkers for cargoes — something last regularly seen in 2008-2010 when rate differentials were significant enough between the vessel classes for similar competition to emerge.

Of course, there are reasons that Capesizes don’t typically carry grain cargoes. Many ports are prepared to unload a Panamax full of wheat, sure, but a ship twice the size may not match up with their unloading equipment, or draft  restrictions (how deeply the vessel rests under the waterline) may preclude them from entry to certain ports altogether. The ships themselves would require extensive cleaning and sanitation measures to switch from minerals to foodstuffs, quite a task for vessels with up to nine massive cargo holds. Furthermore, owners would need to be concerned about a matter alien to ore: spoilage.

What’s next for large bulkers and cargoes?

The vessel demand for Russia’s Panamax-dominated EU coal trade will shift to Capesizes, primarily in the Atlantic, as the EU increasingly sources coal from the US, Columbia, and South Africa. An increased number of Pacific Capesize owners may be willing to do Australian coal backhauls into Europe (utilizing a slightly less profitable voyage to position themselves in a stronger market for a more profitable fronthaul), helping to thin excess Capesize tonnage in that basin as well.
Port congestion would similarly tighten vessel supply. AGI data from an analytics group shows that the first quarter of 2022 already approached October 2021 levels of port congestion (when dry bulk rates hit all-time highs), and that China’s “zero-Covid” policies might “prolong the escalated levels of vessels congestion already recorded in the dry bulk segment”, according to the group.

Some market participants predict that a critical boost in Chinese demand for coal and iron ore may come in the second half of this year as Beijing increases steel exports to reach economic targets which “may not be met due to the impact of Covid and soft demand from the country’s property sector”, according to one shipbroker.

Healthy demand for Capesize cargoes of iron ore and coal would cut competition for Panamax-sized cargoes, further firming Panamax demand. These factors could serve to put significant upward pressure on dry freight rates across the board, without factoring the boost one might expect from tonne-mile demand increases as global trade routes shift.