As the world’s focus turns on to the energy sector and what is the best green fuel for the future, there are still many unknowns, specifically in the shipping sector. As shipowners flounder desperately to find an alternative to traditional bunkers, many are hailing ammonia as an ideal solution.

What are the alternatives?

Many fuels have been touted as the next marine fuel as the deadline for green targets edges closer. Ammonia, methanol, biofuels, hydrogen, LNG and LPG have all been suggested as options for the future of shipping, but how realistic are these suggestions?

The truth is, they could all play a part in fuel mix going forward, but it is unclear which will emerge as the chosen one. Each of the potential zero and low-carbon fuel options have significantly lower volumetric energy densities — the energy produced per tonne of fuel — than fuels currently in use. But energy density and carbon dioxide reduction are just two of the factors that will contribute to one or more of these options becoming a prominent marine fuel between now and 2050.

One of the touted future fuels is ammonia, specifically green ammonia, which is produced from relatively carbon-free and renewable energy sources such as wind, solar or hydro, using electrolysis.

Green ammonia is just one example in a spectrum of colours on offer for the fuel. Grey is another colour discussed with regard to the use of ammonia to decarbonise the shipping sector. Grey ammonia is produced via fossil fuels, normally in the form of methane. While some are tipping blue ammonia to make more of an appearance, and could be a direct competitor for green. Blue ammonia is made from nitrogen and blue hydrogen derived from natural gas feedstocks, with the carbon dioxide by-product from hydrogen production captured and stored. 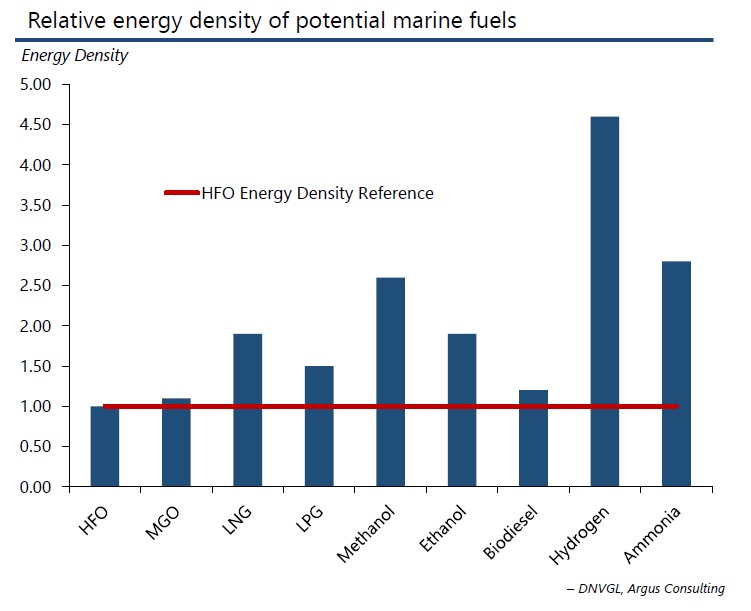 Are the IMO’s targets achievable?

The International Maritime Organisation’s (IMO) 2030 and 2050 targets will require a change in the fuel mix within the shipping industry. The 2030 target sets out to reduce the average carbon intensity – CO2 per tonne mile – to at least 40pc by 2030. While the 2050 target is for a 50pc reduction in overall greenhouse gas (GHG) emissions by 2050, and for a 70pc cut in CO2 emissions over the same timeframe.

Although low and zero-carbon alternatives to bunker fuels will be the main topic of conversation over the coming decade, they are not going to be essential for meeting the IMO 2030 targets. But there is going to be room for the uses of these fuels to become more prevalent in the fuel mix as we edge towards the IMO 2050 marker.

And it is the IMO 2050 target where more aggressive steps will be taken towards zero-carbon shipping. In spite of this, fuel oil and middle distillates will continue to play a part in the bunker fuel mix through to 2050, but their usage will diminish as part of the cycle of vessels.

It is this target which throws a spanner in the works for those considering LNG as a viable option. Shipowners will have little reason to favour LNG-fuelled vessels from 2030-50 because of their inability to satisfy the far stricter 2050 targets.

Green ammonia represents just one of the options for reducing CO2 in the shipping industry, but it is one of the more significant ones. In order for a fuel to become a viable option it needs to be cost-effective, widely available and scalable. Ammonia benefits from having existing infrastructure, but the current built-up cost of green ammonia is significantly higher than the price of existing bunker fuels.

But of the 3mn-4mn t/yr of ammonia expected to be used in the marine fuels market in 2030, none is required to be green in order to meet IMO 2030. This is likely to mean that the proportion of ammonia required to be green will grow consistently throughout the period, from zero in 2030 to 100pc in 2050. And in order to keep pace with the IMO’s recommended GHG reduction trajectory, as much as of the 40mn t/yr as possible will ideally be green in 2040.

Ammonia also holds an energy density advantage over hydrogen, but it is less dense than current conventional marine fuels. Methanol suffers from the same issue, and hydrogen is unlikely to be a viable solution for long-haul voyages because of the lack of energy density.

There will be some growth in demand for methanol and hydrogen, but ammonia is expected to emerge as the most notable contributor for zero-carbon fuels.

One of the issues which comes up when discussing ammonia is the toxicity of the fuel. When burning ammonia directly in a turbine, nitrous oxide (NOx) emissions become a concern. But one solution to this could be selective catalytic reduction (SCR) technology which reduces NOx emissions to low levels, leaving an exhaust of nitrogen and water. SCRs have been used in coal-fired power plants for decades, and actually uses ammonia itself to remove NOx.

The handling of ammonia is another concern for the market, given its explosive capabilities, but the same could easily be said for hydrogen. And it is the explosive nature of the fuel which raises alarms when considering new or expansions of bunkering hubs to serve ammonia in the future.

For example, customers prefer not to have deliveries by rail or truck owing to safety concerns, so it is typically transported via pipeline or on a special barge when moving within Europe.

There are currently about 200 maritime ammonia terminals operating globally. And typically, these ammonia storage tanks have a capacity of 15,000-30,000t, but can be as large as 50,000-60,000t, but this will need to rise considerably to match the future demand should green ammonia be the fuel to help the shipping industry achieve its 2050 target.

In terms of planned projects, Australia has the largest pipeline – about 33.6mn t/yr — which is likely to be exported to Japan. But the bulk of this demand is not likely to come online until after 2030, given the IMO target framework. Norwegian fertilizer producer Yara recently signed an agreement with Western Australia’s Pilbara Ports Authority for a feasibility study to look into green ammonia bunkering.

The Middle East is the second-largest project region, with about 12mn t/yr of planned supply, which is likely to fill the gap in Europe.

In the short to medium term, the opportunity is significant, with about 58mn t/yr of gross capacity, and an additional 56.3mn t/yr in grey or merchant ammonia, but obviously not all of the planned green ammonia projects will come to fruition.

Australia and Latin America are key examples of this, where there is no significant grey ammonia production present currently in either region, therefore global trade flows are in for a shake-up. 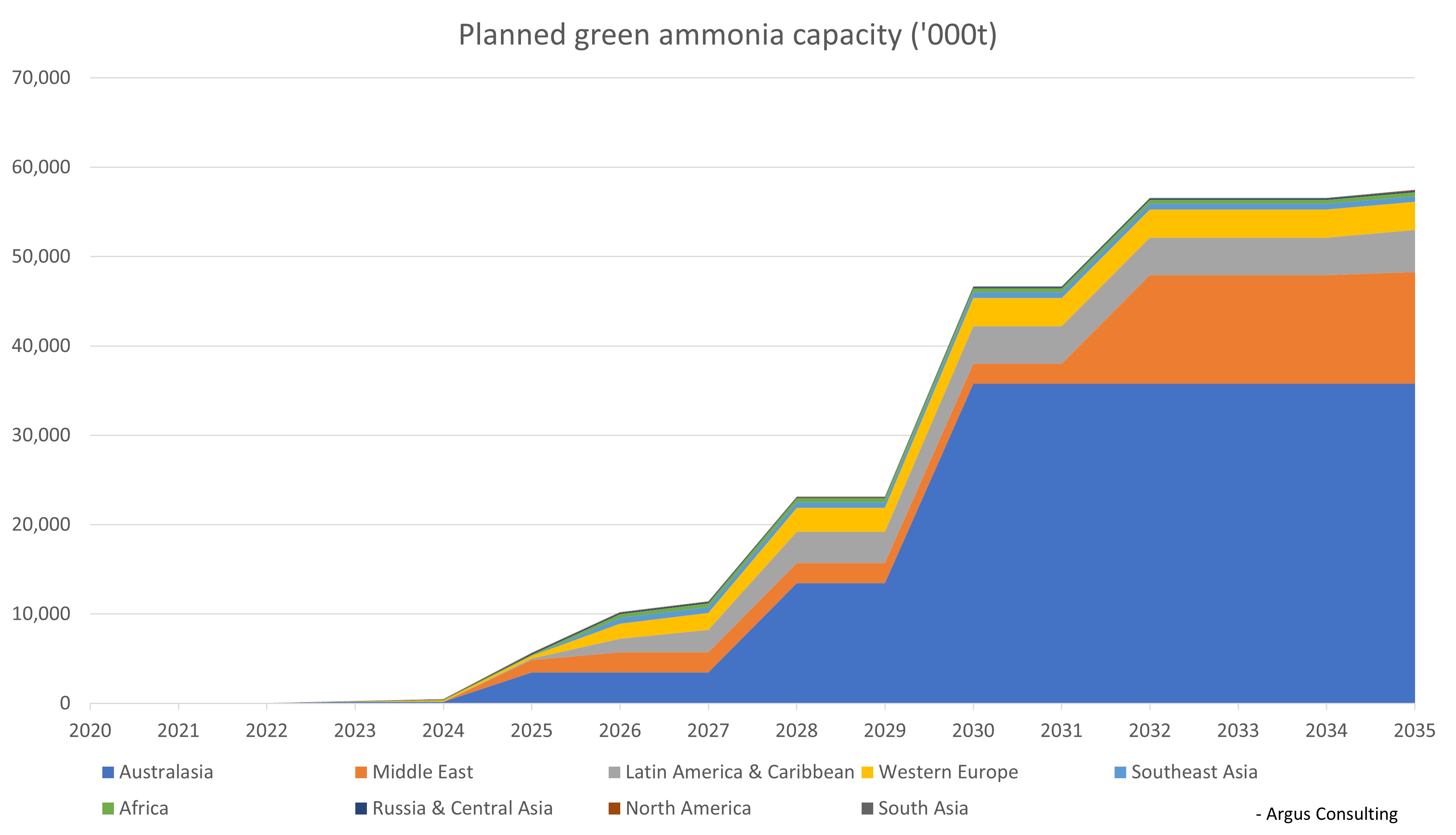 If consumption levels in Japan reach the 30mn t/yr by 2050 as expected, this will stretch the global infrastructure. This volume alone represents the current global market of traded ammonia, which means Japan will have to increase its ammonia storage by a factor of 100, considering its current imports amount to about 30,000 t/yr.

Additionally, if the plan is to use grey ammonia in the interim, while green or even blue ammonia is not available or too expensive, this will create a cost inflation for ammonia buyers, as the shipping market competes against the fertilizer market for ammonia supply.

And if the ammonia market is going to boom, the technology needs to improve. Electrolyser technology needs some significant investment if it is going to bring down the capital expenditure of green ammonia. This is a critical point, particularly when we are calculating millions of tonnes of ammonia in the near future for zero-carbon fuelling.

Weight of Freight: Weighing the past to understand the future - Volatility in east of Suez clean tanker freight rates

In today’s tumultuous markets, freight rates and oil product prices have been unpredictable. Will this volatility continue? What are the main correlations between the two markets?

Weight of Freight: Maxing out the Suezmaxes

Russia’s invasion of Ukraine is redefining the global seaborne trade in crude oil. The impact on freight has not only been longer voyages and more tonne-miles but greater volatility as Europe instead draws on west Africa and the Mideast Gulf for its supplies, while Russ...

Weight of Freight: “Wait and see is not an option” in decarbonization