The timing of this year’s Global LPG Storage Survey seems apt given heightened awareness of the importance of fuel storage and distribution during a crisis.

The disruptions to supply and demand from first the Covid-19 pandemic and then the war in Ukraine have brought energy security to the fore, and in turn the necessity to retain healthy inventories of the critical fuels you use — be it crude, natural gas or LPG. Europe in particular has struggled with LPG supply difficulties. Regional upstream and refinery output has been constricted by rising natural gas prices and dwindling capacities, while Russian LPG imports have been suspended, leaving Europe to compete with Asia-Pacific for US supply.

The growing need in Europe for overseas LPG has drawn attention to the region’s import bottleneck. Competition for railcar cargoes at the Amsterdam-Rotterdam-Antwerp hub grew so strongly after the Ukraine war started that the railcar price skyrocketed, reaching a record $1,550/t fca on 10 March — a staggering $710.50/t premium to large cargoes. The problem demonstrates that while European supply and distribution infrastructure is well developed, there has been little in the way of investment in the past 10 years. Only one new storage facility was added during this time in the region — Dublin-based DCC’s new 34,500t Avonmouth terminal in the UK, which is due to open soon.

Ukraine has also found itself cut off from its main suppliers from the east, Russia and Kazakhstan, meaning it must import LPG overland from its western neighbours. But it does not have the import terminal or storage infrastructure for such a major structural shift in supply, leading to shortages in the country. Thankfully, it is managing to lift imports and suppress recent retail price rises, although it has a long way to go to get back to pre-war levels.

Another notable challenge the world faces tied to storage infrastructure is how to transition to clean, renewable fuels. Hydrogen is wonderful as an idea, less so on a practical level given the difficulty of storing and transporting it, requiring huge amounts of infrastructure investment to simply get the market off the ground. As the latest survey testifies, LPG storage infrastructure is well developed and still expanding. It provides a foundation for renewable gaseous fuels such as bio-LPG and renewable DME, so it should be utilised well into the future. 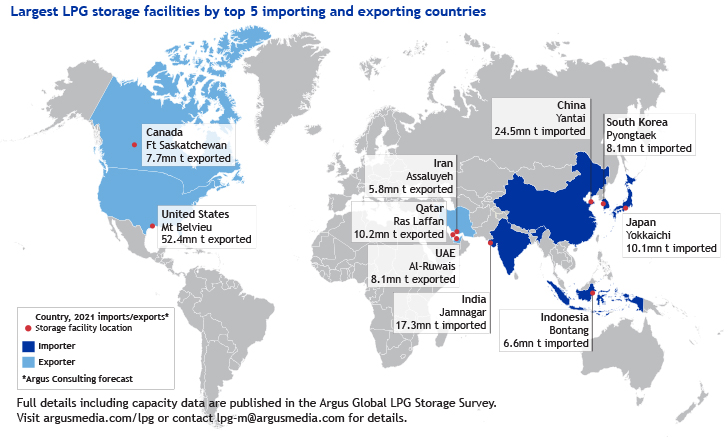 This year’s storage survey has grown in scope, covering more than 1,120 facilities with a combined capacity of around 82mn t — up from 1,065 units for 77.5mn t in 2020. China continues to drive much of the expansion in storage capacity. The country’s count increases to 120 facilities with a combined capacity of 5.3mn t, up from 109 facilities for 3mn t in 2020. The survey includes an impressive 16 Chinese projects due to open later this year or in 2023, which will add 1.4mn t of storage space — the largest of which is Oriental Energy’s 200,000t facility in Maoming, Guangdong province, which is due to open in the fourth quarter. China’s rapidly expanding propane dehydrogenation sector is still the driving force behind the country’s storage growth, as propylene producers look to import, store and trade growing quantities of propane. 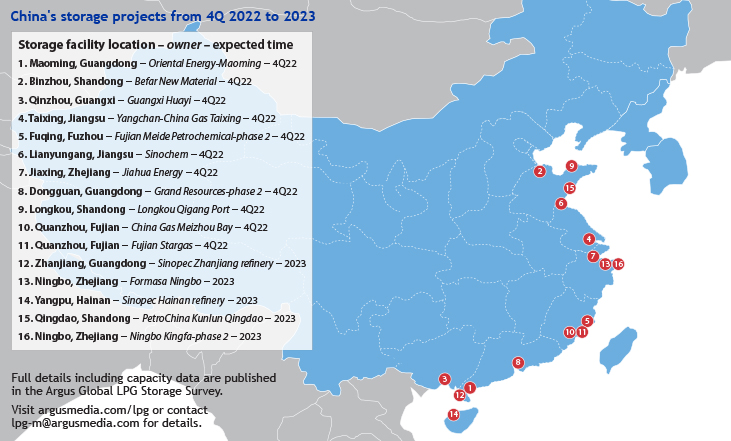 In Bangladesh’s fast-growing LPG cooking market, the storage facility count rises to 23 with a combined capacity of 93,200t, up from 15 for 64,000t in 2020. The Nigerian market also continues to push ahead, despite the challenge of rising retail prices, with eight terminals added to this year’s survey, pushing its capacity to 206,000t from 160,000t. And Canada has emerged as a significant exporter of seaborne LPG from its west coast to northeast Asia in recent years, following the opening of the Prince Rupert terminal and expansion of the Ridley Island facility. This has helped push the country’s capacity up to nearly 6mn t from 4.7mn t.

The biennial global storage survey is published exclusively in Argus LPG World. It features key information gathered on over 1,120 facilities in 90 different countries. The data provides an important, independent view into new, existing and upcoming projects to inform and strengthen strategic decisions.

From the Economist's Chair: Silver linings for oil demand among the recessionary storm clouds?