The US steel market is barreling ahead to 2023, and it’s time again to look at what is driving the market. To kick off December, US flat-rolled steelmakers announced price hikes in a preemptive move as domestic scrap prices were poised to halt their seven-month slide.

Since 1 December, two rounds of sheet price hikes have unfolded, and domestic scrap prices showed signs of life for the first time since April. Let’s now examine our key indicators from the webinar and discuss possible implications as we head into the new year.

US HRC and prime scrap 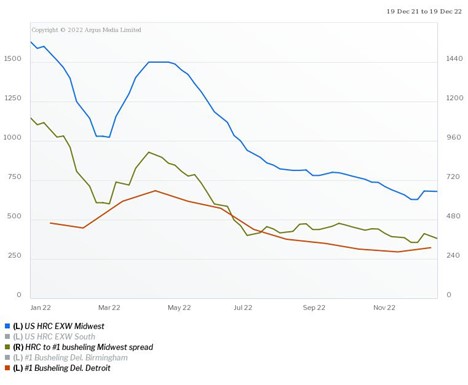 Prior to the December scrap trade and sheet price increases the spread between hot-rolled coil (HRC) and #1 busheling was at $340.45/short ton (st). This was the smallest spread between the two since September 2020, according to Argus historical prices.

The spread has widened slightly to $364.66/st as gains in finished steel prices were slightly offset by rising scrap prices in December. US steelmakers have seemingly been able to capture some of the announced sheet increases with the weekly Argus US HRC price rising $51/st to $678.50/st on an ex-works Midwest basis since late November. The increases still fall well short of Cleveland-Cliffs targeted levels of $750/st but were the first upward movements since the temporary spike in March on the back of Russia’s invasion of Ukraine.

Removing the aberration of the war-related spike, US HRC prices have fallen consistently since hitting all-time highs in September 2021.

US prime scrap and pig iron 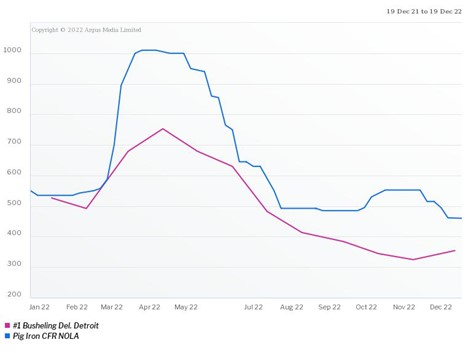 The gap between domestic US pig iron and ferrous scrap prices has also started to shrink with scrap prices on the rise and pig iron falling.

US imported pig iron prices carry an approximately $106/ metric tonne (t) premium to #1 busheling Detroit scrap prices compared to $170/t at the beginning of the month. Even though the spreads have tightened, they remain elevated relative to historical levels.

Heading into 2023, US steelmakers will be grappling with the structural market shift in pig iron supply. Two of the three largest exporting regions to the US, Russia and Ukraine, remain mostly absent from supply with the exception of some limited cargoes out of Ukraine through Poland throughout the year.

In addition, with pig iron prices now at $460/t cfr New Orleans basis, other potential suppliers are less likely to allocate capacity to pig iron production compared to earlier in the year when prices spiked to over $1,000/t. There is expected upside in January scrap prices which could see the gap close further.

US obsolete grades and exports 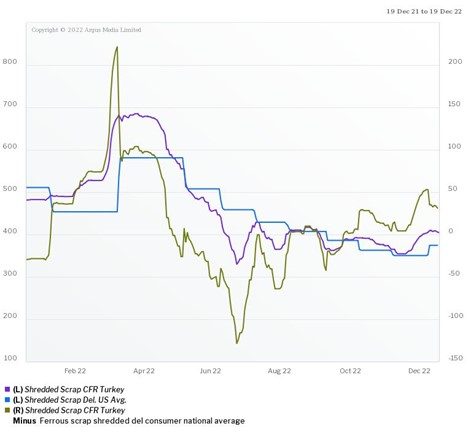 Turkish scrap prices entered December in the midst of a rally, rising $55/t to a recent peak of $409.50/mt cfr Turkey in the middle of the month.

Export prices appeared to have reached a near-term peak and have been trading mostly flat since 8 December. In addition, US domestic scrap prices were able to close the gap to exports now at just a $30/t premium — a level which could shrink further as January domestic price outlooks point toward more gains. 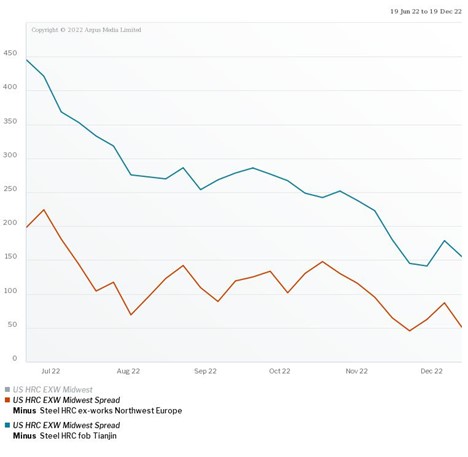 US and global HRC prices all found similarly timed floors and started to rebound slightly through the first half of December.

There remains limited opportunity for US buyers to import commodity grade HRC from international suppliers with the spread between US and Northern European HRC prices hovering around $50/st. The price gap would evaporate once freight alone was included in the mix. To make matters tougher for importers, US buyers are still facing relatively short domestic lead times and have expressed continued concerns over the macroeconomic picture heading into 2023.

This is leaving many lacking the confidence in the market to purchase imports unless for more niche products or items less likely to be produced by domestic steelmakers.

Who’s in the driver’s seat?

Heading into 2023, the slight edge for leading driver in the US steel market would have to fall on raw material prices.

US steelmakers were facing higher raw material prices in December with momentum continuing into January. The prospect of two consecutive months of rising scrap prices and US HRC prices approaching $600/st led to steelmakers kicking of price hikes. Looking ahead to January, if US producers are able to keep raising prices it could lead to scrap dealers attempting to capitalize on the stronger finished steel levels, potentially putting finished steel as the driver to begin the new year.

Argus explores the essential role of copper in the global energy transition with LSEG.

Metal Movers: The business case for diversity with WIM UK

This episode highlights the real-world impact of diversity in mining through the lens of Women in Mining UK.