Asian LNG buyers have turned to the relative security of term contracts amid a very volatile spot market in 2021-22, with Chinese buyers leading the deals. Fluctuations in the TTF have kept Brent the most popular price linkage. Read on to learn more.

Every commodity goes through a life cycle in the path towards commoditisation. The majority of term LNG contracts since the 1960s and 1970s have been priced against crude oil, as the lack of liquidity in the LNG market then meant that the commodity had to be linked to the price of a substituting or competing fuel. Adopting a linkage to oil, a comparatively much more mature and liquid commodity, lent confidence to both LNG consumers and sellers.

But the Dutch Title Transfer Facility (TTF) price emerged as a strong contender to Brent in the early half of 2021, with several buyers, trading firms and portfolio suppliers in Asia concluding deals linked to the price as Europe became an increasingly significant and influential participant in the global LNG market. That sparked hopes that LNG may finally be pegged to a price that is more reflective of fundamentals in the gas market, as opposed to that of a vastly different fuel, i.e. oil, the price movements of which were often driven by factors completely unrelated to gas.

But the extreme volatility in the TTF, particularly towards the end of the year, has prompted some buyers to reconsider this linkage, reinstating the still indispensable role of Brent in pricing LNG term contracts for now. The recent influence of the TTF natural gas on Asian spot LNG price has garnered substantial interest in the European gas benchmark, a shift from past years when it was merely referenced as price floor for the “premium” Asian spot market.

But Brent remains the most popular choice of price indexation for term contracts despite stronger interest and a corresponding increase in spot deals linked to the TTF.

“Buyers have in recent months discussed various linkage options, including a hybrid of Europe, Asia and US [gas prices] … but they almost always still end up going for Brent,” a southeast Asian producer said.

Preference for the traditional linkage stems from Brent’s relative stability and liquidity.

“Because buyers typically pay the average price of oil over three months, any short-term volatility in oil doesn’t affect LNG that much,” the producer added, referring to the 301 formula most LNG contracts follow.

Oil-linked contracts accounted for around 67pc of LNG’s purchases in 2018, according to the International Gas Union. Japan imports most of its LNG at prices linked to the Japan Crude Cocktail (JCC) — a weighted average of delivered oil prices to Japan. 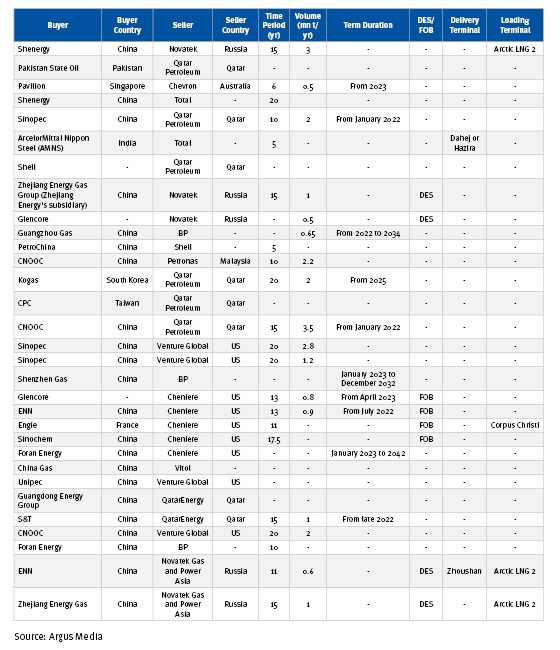 Chinese utility Zhejiang Energy Gas’ LNG term supply deal inked with Novatek Gas and Power Asia early this year is at least the 25th term supply agreement signed by a northeast Asian buyer since the start of 2021, reflecting a growing trend among the region’s LNG buyers of moving away from spot transactions and towards term deals.

This is a radical shift from just about a year earlier when buyers shied away from long, seemingly rigid term commitments and swarmed the spot market that offered relatively more flexible options to meet their LNG requirements.

But the tables have turned, with buyers now looking to lock in prices for their LNG at rates far more competitive than spot levels.

China's state-controlled CNOOC signed an agreement in December to receive LNG from US supplier Venture Global across 20 years, in its first term deal with a US exporter. It likely paid around a $1.80-1.90/mn Btu premium to 115pc of the US natural gas Henry Hub price for the 2mn t/yr of LNG it will receive from the planned 24mn t/yr Plaquemines LNG project, and around a $2/mn Btu premium to 115pc of Henry Hub for the 1.5mn t/yr it will receive from the 10mn t/yr Calcasieu Pass LNG facility, market participants said. The firms did not state when deliveries will begin, but market participants expect it to begin in 2023.

Fourteen Chinese buyers, including Zhejiang Energy Gas, have signed a total of 22 term deals since the start of 2021, making up 87.5pc of the northeast Asian buyers to have done so (see chart below). This is up from just around three Chinese consumers that signed term contracts in 2020. 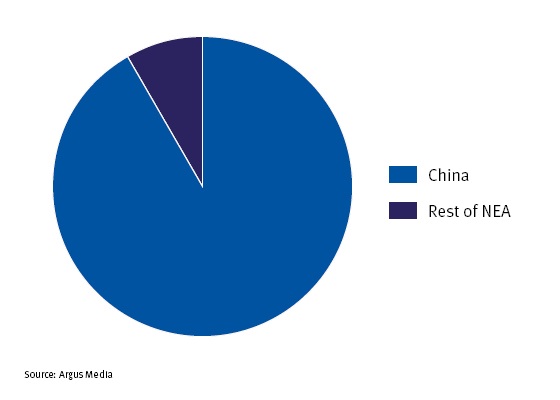 Chinese consumers have heeded official calls to prioritise their term offtakes to ensure security of supply particularly during peak demand seasons, with exceptionally volatile spot prices this year providing the extra push to minimise risk in an increasingly unpredictable market.

But it’s not just the Chinese buyers who recognise the merits of term deals. South Korea’s Posco is likely in discussions with US firm Cheniere to sign a deal for 400,000 t/yr of LNG to be delivered on a fob basis across 10 years from 2025, market participants said.

Fellow South Korean independent Prism Energy is likely in talks with Russian producer Novatek to buy 500,000 t/yr of LNG across 12 years starting from late 2023 or early 2024, they added. Around 2-3 Japanese buyers are also considering signing term deals in the near future, market participants said.

Term deals signed by buyers from South Korea, Taiwan and Japan collectively accounted for around 9.1pc of the total term agreements inked by northeast Asian importers in 2021.

The slew of term contracts came as spot LNG prices rose to a record high in late December, putting them at a wide premium to term prices.

Oil-linked term contract prices for January deliveries based on a three-month crude average (301) contract stood at $11.08/mn Btu, assuming a 14.5pc indexation to Brent and $7.64/mn Btu, assuming a 10pc indexation, on 22 December, when spot LNG prices hit a record high. The slope of many historical Asia-Pacific long-term contracts was pegged at around 14.5pc to Brent, but was significantly lower at 10-11pc in recent years.

These are around one-sixth to one-third of the corresponding price for spot deliveries in the same month. The ANEA price, the Argus assessment for spot LNG deliveries to northeast Asia, rallied to an all-time high of $44.980/mn Btu for second-half January on 22 December. Argus was no longer assessing prices for first-half January deliveries that day.

Sharp gains in European gas hub prices and regional winter restocking demand, coupled with bouts of supply disruptions, had supported northeast Asian spot LNG prices at levels above those in the same period in past years.

Argus LNG Daily covers key indexes covered in this article such as:
- ANEA (Argus Northeast Asia) LNG
- JCC (Japan Crude Cocktail)
- TTF
- Ice Brent
Get your sample report here and reach out to us to find out more about our LNG market reporting