Chinese lockdowns and commodity price hikes due to conflict in Ukraine have raised Atlantic Basin inflation to forty-year highs, forcing central banks to respond with rate rises they hope will not trigger recession. This contrasts sharply with more accommodative fiscal and monetary moves in China, whose fortunes in 2022 will be as important in determining global economic and oil demand growth as developments on the battlefields of Ukraine.

Consumer price inflation is running hot across the UK, continental Europe and the US. The ECB finally moved into line with fellow western central banks in June, flagging a reversal of monetary policy easing, and is now expected to enact an initial 25bp interest rate rise in July, with more to follow. It has had to put in place emergency measures to contain borrowing costs in southern Europe to enable the broader rate increases. A week later the US Federal Reserve surprised the market by abandoning a previously cautious approach, raising rates by 75bp after the May CPI reading came in at 8.6% y-o-y. The Bank of England enacted a widely-anticipated 25 bp increase, but Switzerland’s SNB caught markets unawares with its first rate rise since 2007, also flagging more tightening to come. 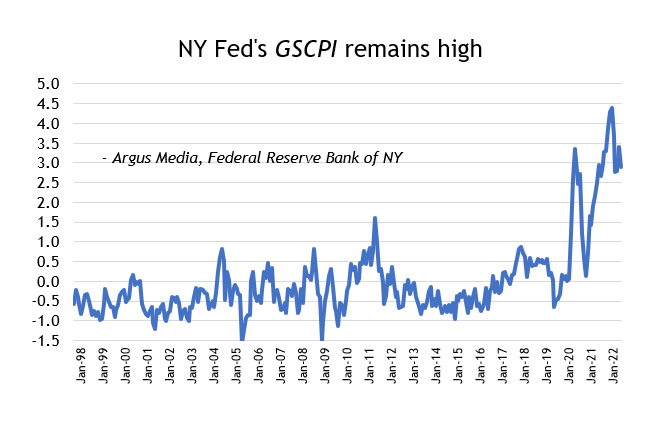 With this year’s consumer price inflation expectations in the Atlantic Basin now between two to four times higher than a year ago, this leaves authorities with no choice other than to rein-in price pressures, even if that risks undermining growth or employment. A May easing in the New York Federal Reserve’s Global Supply Chain Pressure Index (GCPI), although welcome, nonetheless leaves that gauge of the logjams facing manufacturers and consumers alike at extremely elevated levels. With current inflation being driven by both demand- and supply-side pressures, raising interest rates becomes a much blunter instrument if prices were being propelled higher largely by runaway demand.

As western economies confront a delicate balancing act between restraining inflationary pressures while protecting post-pandemic economic recovery, the challenges facing China are rather different. End-user price controls and weak underlying consumer demand mean 2022 CPI expectations there are more muted, at or below the 2.5% level envisaged a year ago. China’s real estate sector (responsible for 25%-30% of the country’s GDP) was already confronting a government-imposed liquidity squeeze in the period since mid-2021, weighing on construction activity and local government revenues. Domestic oil demand has been hit further by the renewed lockdowns facing Shanghai and other urban hubs during April and May. 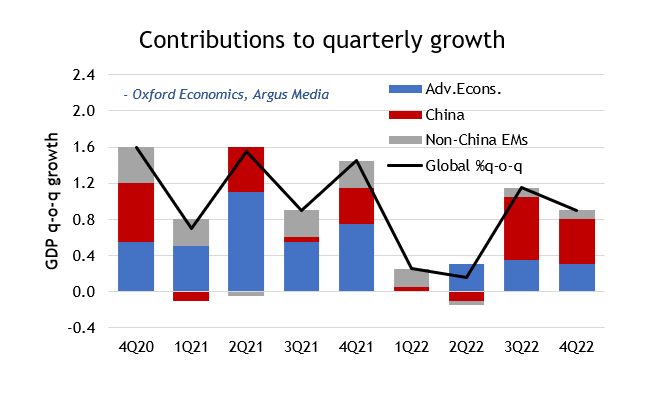 China could persist with an albeit-modified version of the recent “dynamic net-zero” policy for controlling Covid-19 outbreaks until after the Communist Party Congress in the autumn. Nonetheless, in an attempt to engineer 2022 GDP growth near its 5.5% target, the government will deploy a $600 billion infrastructure programme, while rate cuts designed to stimulate business investment are also likely to weigh on the value of the Rmb. Though this could enhance the competitiveness of Chinese manufactured exports (which indeed looked strong in May), this could be counteracted by sluggish global demand for Chinese merchandise goods exports. Moreover, costlier imports could continue to weigh on China’s international commodity purchases, which despite recovery in May nonetheless stood a cumulative 6% below last year’s levels for the first five months of 2022.

Argus oil demand projections include an assumption that China’s GDP growth attains 4% for 2022 as a whole, below the official government target but nonetheless showing consistent recovery in the second half of the year. If achieved, this would prove the main contributor for global growth recovery in the second half of 2022. It pre-supposes that China avoids renewed widespread lockdowns (itself a precarious assumption, after renewed Covid-19 outbreaks affecting Beijing and Shanghai at mid-June). 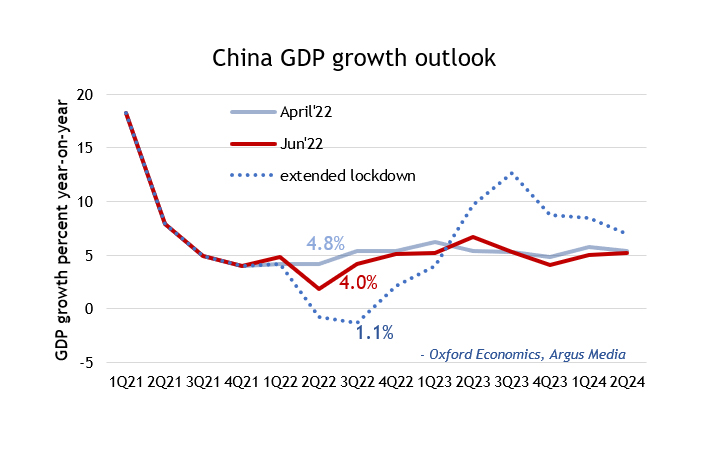 The challenges in achieving even this comparatively muted level of Chinese and, by extension global, growth are several. Chinese consumer confidence is low, urban unemployment has topped 6% and citizens may be inclined to hoard rather than spend any government largesse targeting consumers. Moreover, local governments, normally tasked with overseeing infrastructure and construction spending, are themselves reeling from an ongoing slump in land sales revenues due to the property market slump, and the elevated costs of controlling recurrent Covid-19 outbreaks.

Just as China matters for global macro-economic growth prospects, so too for the oil and broader commodity markets. Global tightness in diesel fuel for example is being stoked not only by a gradual tightening in Russian supply, but also by low Chinese refinery runs and a tacit export ban that has seen diesel exports fall by nearly 500 kb/d in the last year. Beijing is determined to avoid the sort of diesel and power crises that the country experienced in 2021. At the same time, domestic demand – infrastructure stimulus notwithstanding – could flatter to deceive. 4% GDP growth could raise crude demand by 300-400 kb/d this year.

However, if extended lockdowns were to persist into the second half of 2022, this could depress GDP growth closer to an annual rate of 1%, potentially wiping out underlying oil demand growth altogether. Western commentators’ attention is understandably drawn to the ramifications of the war in Ukraine, associated economic sanctions, Opec+ production decisions and the Federal Reserve’s delicate monetary policy balancing act. However, they’d do well to remember that the fate of China’s economic recovery is pretty fundamental too.

From the Economist's Chair: Is an oil embargo on Russia really the smartest move?

The EU is struggling to get everyone onboard for an outright embargo on oil imports from Russia, but could follow a more flexible, market-driven route.

From the Economist’s Chair: Moving towards an inflection point?

The Russia-Ukraine crisis is above all a humanitarian tragedy but has also augmented commodity price inflation as the world comes to terms with actual and threatened supply disruptions. Markets, as always, will adjust via shifts in pricing and arbitrage. However, focus ...