Like cars, the vast majority of tankers burn fuel derived from crude oil, the price of which has hovered around multi-year highs since late February. Owners of less efficient vessels are feeling pain at the pump. With the Russia-Ukraine conflict showing little sign of resolution and global oil demand steadily rising in the background, such pain may continue for at least the near future as the oil price remains supported.

The higher the bunker prices goes — and they are near record levels — the deeper the savings for eco tankers become. In the last two years, bunker prices have quadrupled to about $1000/t, tracking the price of crude. Savings for eco VLCCs plying the Mideast Gulf to Asia-Pacific route have risen from about $4,000/d to about $15,000/d, reaching a high of $17,000/d in early March, according to Argus estimates. The estimate assumes that an eco VLCC burns 52t/d of fuel on the laden leg and 38t/d on the ballast leg, while the non-eco VLCC burns 70t/d and 53t/d, respectively. Furthermore, it assumes both ships steam at 12.5 knots and burn 0.5pc sulfur fuel oil loaded at Fujairah.

Another factor determining the level of savings is the type of vessel. VLCCs, which are the largest type of standard oil tanker, burn the most fuel, so an eco VLCC yields the deepest savings among oil tankers. Eco-related savings are more modest for a smaller tanker such as a medium range (MR) tanker, which is the smallest standard sized tanker and is employed mostly in regional refined products movements. 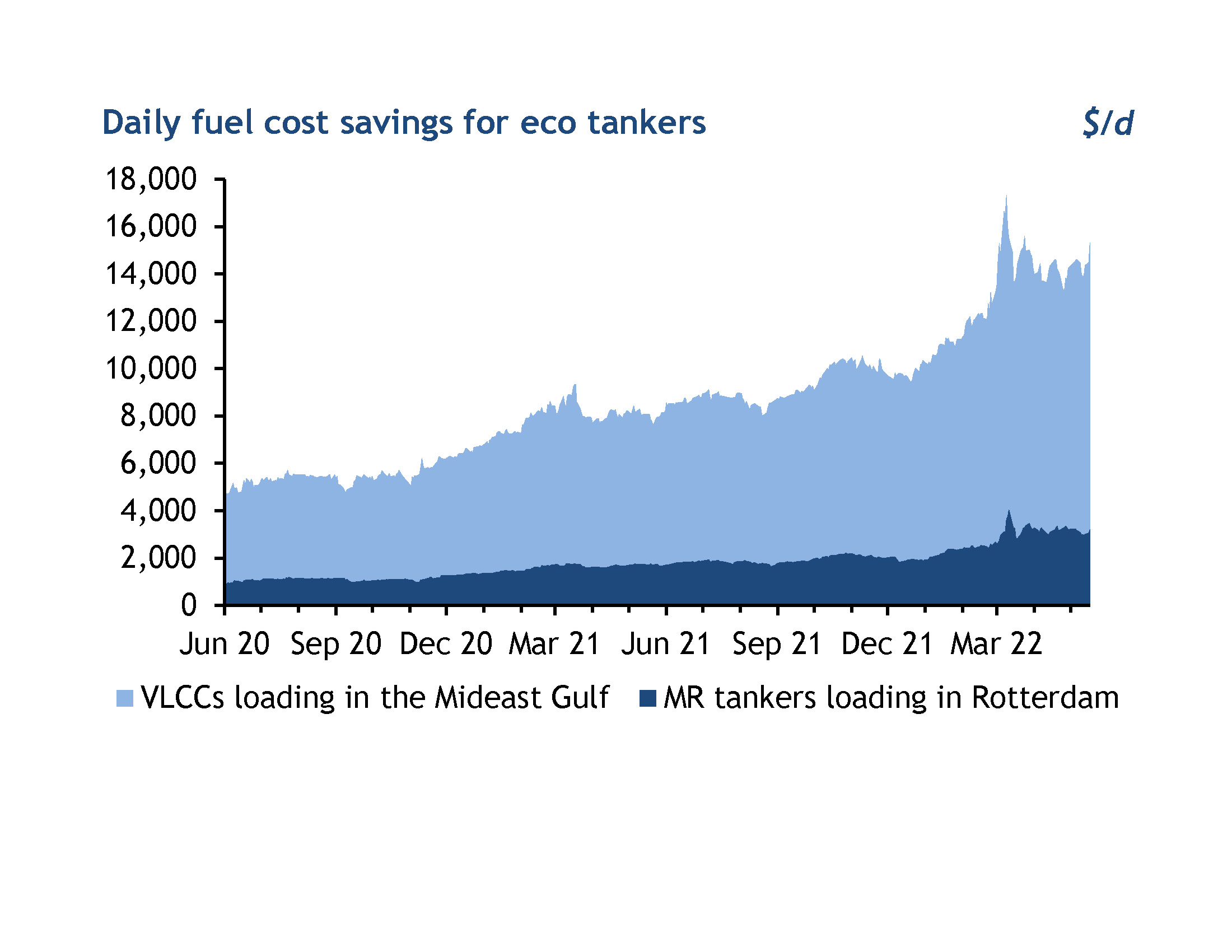 Eco MR tankers save about 6t/d on fuel consumption, according to product tanker owner Scorpio Tankers. On that basis, in the last two years, savings for an eco MR plying the Europe to US Atlantic coast route have risen from about $800/d to about $3,000/d.

Defined by improvements to hull and engine design, eco tankers started to become the standard type of tanker built after 2015. Because of the practice of scrapping oil tankers that reach around 20 years old and the roughly seven years in which eco tankers have been the primary delivery from shipyards, the share of eco tankers in the global tanker fleet is considerable and continues to grow. 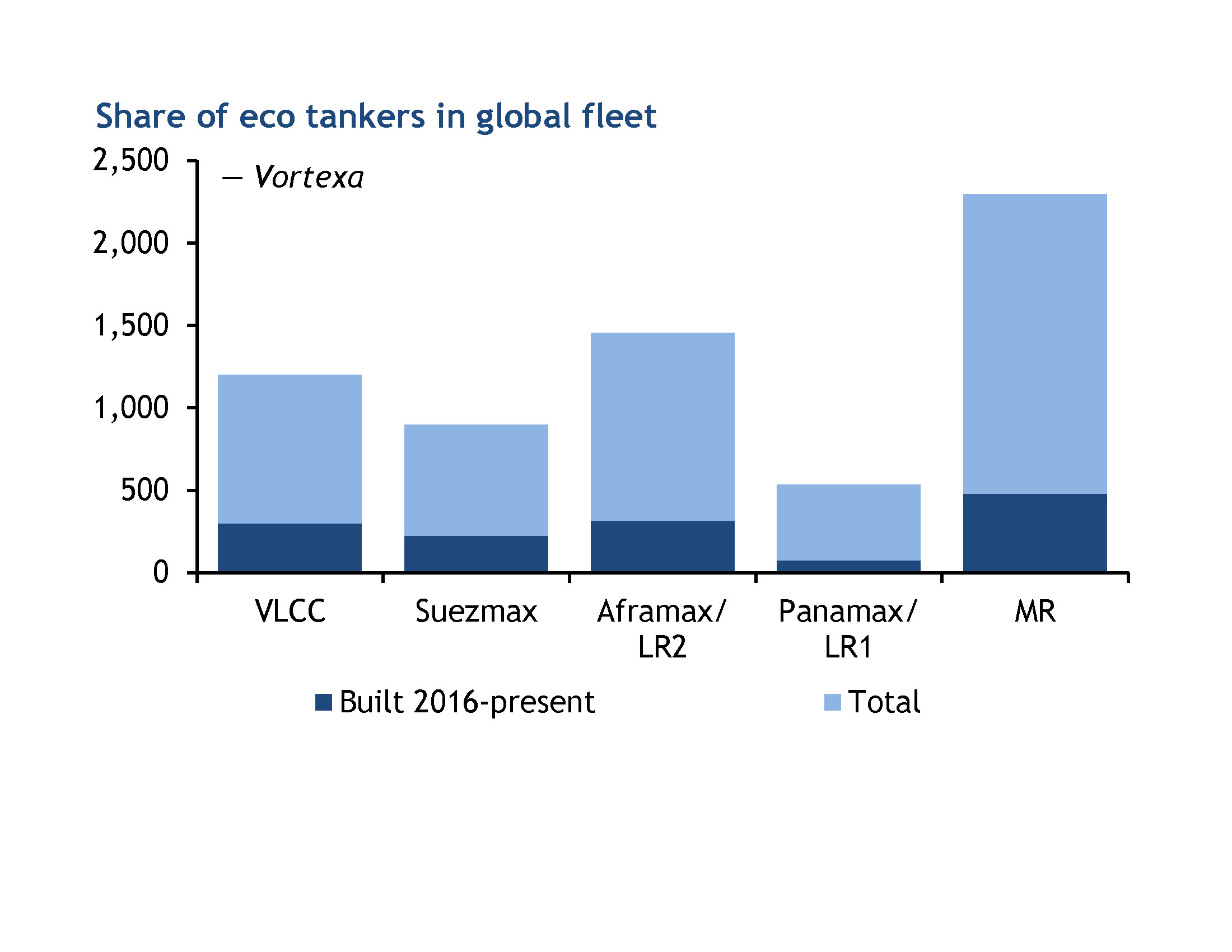 Shipowner preferences for ordering VLCC and Suezmax tankers over smaller vessels in the last seven years has meant those two segments have the highest share of eco tankers. The share of VLCCs built after 2016, and therefore likely of eco design, is 33.1pc, the same as Suezmaxes, according to Vortexa data. Only 16.1pc of the Panamax or long range 1 (LR1) fleet was built after 2016, as the market has tended toward larger sized tankers for inter-regional journeys.

On spot tanker charters – charters for a single voyage – fuel costs are generally included and paid for by the shipowner/operator. Since there is generally no market rate difference for eco tankers versus non-eco tankers, shipowners who employ their eco tankers for such charters will get paid the same rate but will simply not have to pay as much for fuel. This means higher earnings for shipowners using eco tankers for spot charters. In a similar way, a taxi driver picking up fares with a brand-new hybrid vehicle is likely to profit more than one with a 20-year old SUV, assuming they charge the same rates.

Take for example the Mideast Gulf-Asia VLCC route, which is fixing at a market rate of WS40.5, equivalent to $2.38mn lumpsum. The bunker bill for a non-eco VLCC roundtrip voyage on the route is about $2.2mn, comprising the majority of the market rate. But the bunker bill for an eco VLCC roundtrip voyage would be about $1.6mn, yielding about $600,000 in savings, or $15,700/d for the roughly 38-day roundtrip.

High fuel prices are a bitter pill to swallow for anyone who bears them. But gains in efficiency – as some tanker operators have found - make the medicine go down more smoothly.