Spot crude prices made large swings at the US Gulf coast during the October trade month amid a backdrop of shifting international supply and demand fundamentals.

Fresh demand materializing out of Asia-Pacific — particularly India and China — propped up waterborne spot crude prices at the start of the month, before rising domestic supply coupled with European refinery disruptions and higher Libyan output deteriorated arbitrage economics. WTI fob Houston fell relative to month-two Ice Brent, the prompt contract used to price waterborne cargoes, over the course of September to its lowest level since May 2020 by 23 September, the final day of the October trade month. 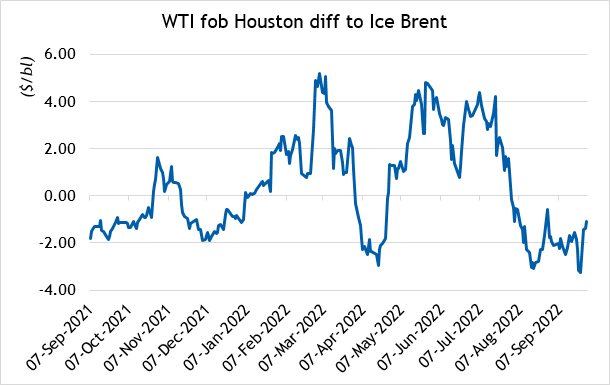 Two upcoming sales of crude from the US Strategic Petroleum Reserve (SPR) are expected to offset a recent decision by Opec+ to lower production targets starting next month. The US most recently offered to sell another 10mn bl of sweet crude from the SPR for delivery in November. That will leave 15mn bl available to sell under the 180mn bl authorization.

Additional crude supply from the SPR in recent months has helped sate the domestic refining appetite, leaving more light sweet crude production from the Permian basin available for export purposes.
Total US crude exports climbed by 224,000 b/d to a record high of 3.8mn b/d in July, according to the latest available monthly statistics by the US Census Bureau. Shipments to Europe comprised roughly 45pc of total outbound flows, stepping in for lost Libyan crude supply earlier in the year, while Mediterranean and northwest Europe refiners sought out alternative supplies to their traditional import slates.

Libya is planning to increase exports of Es Sider crude to roughly 277,000 b/d in October, inching higher from an estimated 273,000 b/d in September, which could edge out some WTI supplies to Europe. Libya's state-owned NOC has managed to keep crude output stable since lifting force majeure restrictions on operations at several of its eastern terminals and onshore fields in mid-July.

The Illinois Commerce Commission has set the stage for more takeaway capacity out of the Bakken shale by granting approval to install several pumping stations in the state that will effectively increase capacity on Dakota Access Pipeline (DAPL) and boost Energy Transfer Crude Oil pipeline (ETCOP) from 750,000 b/d to 1.1mn b/d.
The expansion would not require the building of new pipelines nor construction on the existing line that stretches from the Bakken fields in North Dakota to Patoka, Illinois. Bakken crude can then be shipped from Patoka to the US Gulf coast by way of ETCOP.

The commission had initially signed off on the pumping stations in 2020, but a coalition of landowners and environmental groups successfully appealed that decision. An Illinois appellate court in April this year mandated the commission review the case and make another decision.

Opec+ has agreed to cut its October crude production target by 100,000 b/d, marking a return to August quotas amid a backdrop of global recessionary fears and internal group discontent over a perceived disconnect between a tight physical market with limited spare capacity and falling futures prices.
The token 100,000 b/d reduction will reverse a 100,000 b/d increase for September and probably offer symbolic guidance to the market that could support prices, but it will have limited effect on physical supply as the gap between pledged and delivered output continues to widen.

For further details on any of the topics outlined above, consider subscribing the daily Argus Americas Crude report. Argus is watching, as always, how markets will play out amid ongoing geopolitical tensions and a pending recovery from the worst of the Covid-19 pandemic. Come back again next month for an update on the role of US crude exports in volatile global markets. Until then, smooth sailing.

The Crude Report: Soaring trade volume for WTI at the Gulf coast - harbinger of an emerging global crude benchmark

Trade volumes for US benchmark WTI have just hit record levels of nearly 790,000 b/d at the Magellan East Houston (MEH) pricing hub at the Gulf coast.

The G7 is planning to impose price caps on exports of Russian oil to destinations outside North America and Europe after 5 December.

The US Crude Export Chronicles: August 2022

US crude flows to Europe remained resilient in August despite high freight rates and competing supply from Libya, while Asia-Pacific demand materialized as US benchmark prices fell relative to international values.