BioLPG is expanding as an alternative to LPG; commercial bioLPG volumes produced in just one of the pathways have seen consistent growth over five years. The feedstock required for each production pathway is critical to its business rationale.

What is bioLPG and why is it important?

As the energy transition accelerates, there is increasing momentum towards decarbonisation, including for low-carbon and clean-burning fuels such as LPG. But there are questions regarding the decarbonisation of certain sectors, such as petrochemicals, and the need to provide sustainable off-grid heating solutions. BioLPG is an increasingly attractive alternative biofuel and is now considered a promising route to directly decarbonising parts of the transport, residential, industrial and petrochemical sectors. By producing propane and butane from organic or waste feedstocks typically also used to produce other biofuels, carbon emissions reductions of up to 90pc can be achieved.

With chemical composition identical to that of conventional LPG, bioLPG can be used in identical applications and blended with the fossil-based fuel in hybrid solutions. It is a ‘drop-in’ fuel, meaning it can be ‘dropped in’ to the existing LPG supply and use the same infrastructure to be delivered to the customer. This makes it highly desirable for distributors and end users as it does not require further investment along the supply chain.

BioLPG capacity is forecast to grow

The bioLPG market is – at present – limited. At the end of 2021, Argus estimates that 200,000 t/yr of bioLPG was being produced from hydroprocessing and small additional volumes came from converting bioethanol. However, output of bioLPG is expected to more than treble between 2020 and 2025, based on announced projects. If the market maintains this rate of growth, it will expand to over 2.2mn t/yr by 2030. As this growth is realised through just the hydrotreated vegetable oil (HVO) pathway, the development of other technologies to produce bioLPG provide upside to this forecast.

How is bioLPG produced?

At present, nearly all bioLPG is a by-product of hydroprocessing vegetable and waste-based oil feedstocks to make hydrotreated vegetable oil (HVO) and sustainable aviation fuel (SAF). But multiple other pathways to produce bioLPG are under development. The bioLPG yield from this process is typically between 3pc and 10pc. This pathway, along with a number of others under development, are detailed below, which illustrates the links between feedstocks and synthetic steps. 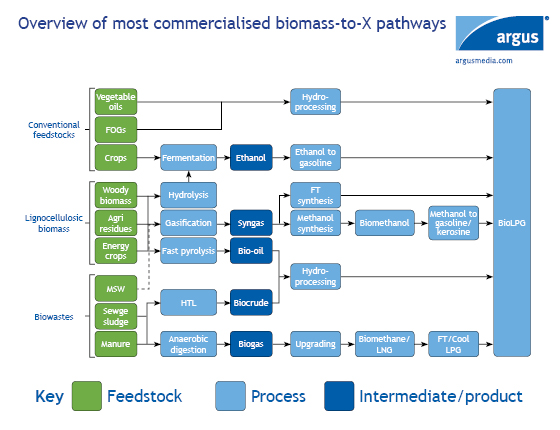 The feedstock required for a given production pathway is critical to its business rationale, impacting process viability, operating costs and the breakeven price of the investments.

Each of these feedstock options and their associated production routes represent an opportunity, but each also comes with challenges. Potential producers need to weigh up a number of critical factors, including:

As the bioLPG market evolves, a number of these processes could move towards commercial-scale production.

Broad political support for biofuels such as biodiesel and SAF has helped promote bioLPG, which is produced alongside these in the hydroprocessing route. There are far fewer measures aimed specifically at promoting bioLPG, but there is a major effort to raise the profile of bioLPG in many countries with strong LPG associations. Some brief examples of how bioLPG production is being incentivised are outlined below:

Across global LPG markets, increasing carbon prices and taxation will drive the profitability of competing biofuels. BioLPG is well positioned to capitalise on these changes if appropriately recognised in legislation updates, presenting direct decarbonisation solutions to the petrochemical, on and off-grid residential heating and industrial sectors, among others.

Commercial bioLPG volumes produced in the hydroprocessing process have seen consistent double-digit growth over the past five years, and the market size was around 200,000 t/yr at the end of 2021. Volumes are forecast to rise to just under 245,000 t/yr by the end of 2022. These volumes are largely marketed across Europe, and have arisen from an increasing number of refinery conversions and greenfield biofuels projects.

Figure 2: Volumes and year-on-year growth of bioLPG from HVO pathway 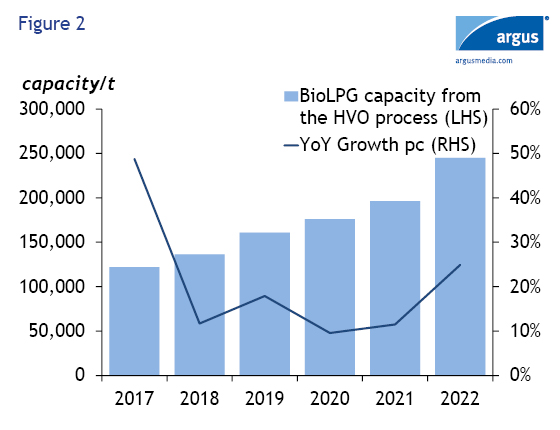 Major energy companies including Neste, Preem, Eni and Total Energies operate these facilities. The largest are operated by Neste in Singapore and Rotterdam, capable of producing up to 54,000 t/yr and 40,000 t/yr of bioLPG, respectively. In 2022, further capacity has been added in Europe, Asia and the US.

In addition, the last 18 months have seen the development of bioLPG pathways beyond hydrotreatment. There have been commercial successes in converting bioethanol into bioLPG, with Polish producer Ekobenz beginning shipments in June 2021. Ekobenz can produce 22,000 t/yr of advanced biofuel, which includes a proportion of bio-LPG. Meanwhile, production from green hydrogen and carbon dioxide — the ‘power-to-X’ process — is being developed in multiple projects, with one planning to start production in late 2022. Forecast volumes from these additional pathways are not included in the below figure, and so provide upside to this forecast.

Numerous projects have been announced since Argus last published a forecast of bioLPG supply, and additional projects are announced frequently. Based on projects producing bioLPG now, projects under construction and projects we think are likely to move forward, Argus estimates that the bioLPG market will have grown to over 625,000 t/yr by 2025 — an annual growth rate of nearly 30pc. 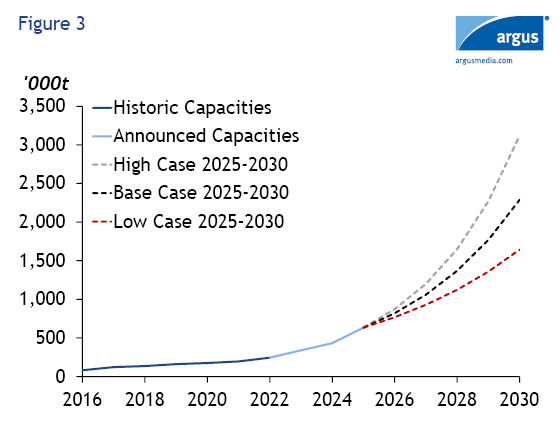 Assuming the same rate of increase from 2025 through to 2030, production has the potential to reach 2.2mn t/yr. Additional step changes in market size propelled by the commercialisation of new production technologies could see far more rapid growth.

Download our whitepaper, “BioLPG: Supply Boost” to read more on this topic.
The paper provides valuable insight into bioLPG feedstocks, policies driving demand, the latest on new projects and how bioLPG will be priced in the future.

To hear more about bioLPG, listen to our latest podcast:
Global LPG Conversations: The bioLPG market in 2030

The timing of this year’s Global LPG Storage Survey seems apt given heightened awareness of the importance of fuel storage and distribution during a crisis.