Last year, the dry bulk trade routes in Europe were reshaped after the European Union and other countries exercised sanctions against Russia. After Russian coal was banned in Europe in August, the ton-miles increased in the region, but it didn`t support the rates for dry bulk vessels, which remained mostly lower than the preceding year.

A slowdown in the global economy, sluggish demand for iron ore in China, Ukrainian grain-exporting ports being blocked for the most of the year and decreased import of coal to China as domestic production rose, has resulted in lower tonnage efficiency, expected to fall further in January 2023 after the implementation of the EEXI and CII regulations.

In 2021, Europe imported around 50.6mn t of coal from Russia, 38pc of the total supply, according to Global Trade Tracker (GTT). About 8.7mn t of this volume was exported to Poland mostly by rail roads, directly from Kuzbass and Khakassia through Belarus and Baltic countries, without using ships. Some minor volumes of lignites was delivered to Hungary and Slovakia using railroads from Siberia through Ukraine. Now Europe must substitute all this volume using naval routes, while Russia is trying to redirect its exports from western ports to Asia-Pacific, Turkey and some other markets cutting production simultaneously.

After the conflict between Russia and Ukraine started, Poland and Baltic countries banned Russian coal in the middle of April 2022. Since August 2022, other European countries were unable to buy Russian coal too and face a serious challenge – how is flow to be to substituted?

Direct rival of the coal in the energy mix is natural gas, but Russia was the primary gas supplier of Europe as well. After the start of the conflict, the Russian supply to Europe was limited and the prices for natural gas and LNG soared. Several European countries announced plans to reduce dependence on Russian gas, Moscow demanded to pay for the gas in roubles, explosions happened on Baltic Stream pipelines. A relatively warm autumn and ample volumes in storage helped save the situation but natural gas cannot be a substitute for Russian coal, and the demand for solid fuels rose in economies like Germany, France and Poland.

Therefore, Europe is increasing seaborne coal imports from other sources. The average haul for Russian coal exports and EU imports increased by 28pc and 38pc, respectively in 2022, according to shipping association Bimco.

The main substitutes for Russian coal in Europe are from USA, Colombia, South Africa, Australia and Indonesia, who previously were more focused on Asian markets. These countries are located further from Europe than Ust-Luga in the Baltic, Taman on Black sea and even Murmansk on the sea of Barents where most of the coal from Russia were coming from. In January-October 2022, these six countries shipped 74.6mn t of coal to EU and UK, which is about two tomes higher than the first ten months of 2021.

USA is the closest supplier, with their main coal terminal on the east coast, Hampton Roads, located  about 3500 miles from Rotterdam. In January-October 2022, US increased the exports of coal to EU and UK by 58pc compared to the same period in 2021, to 22.3mn t. So, the ton-miles on this route jumped from 49.4bn tonne miles (tmi) to 78bn tmi.

US to Europe tonne-miles (tmi) 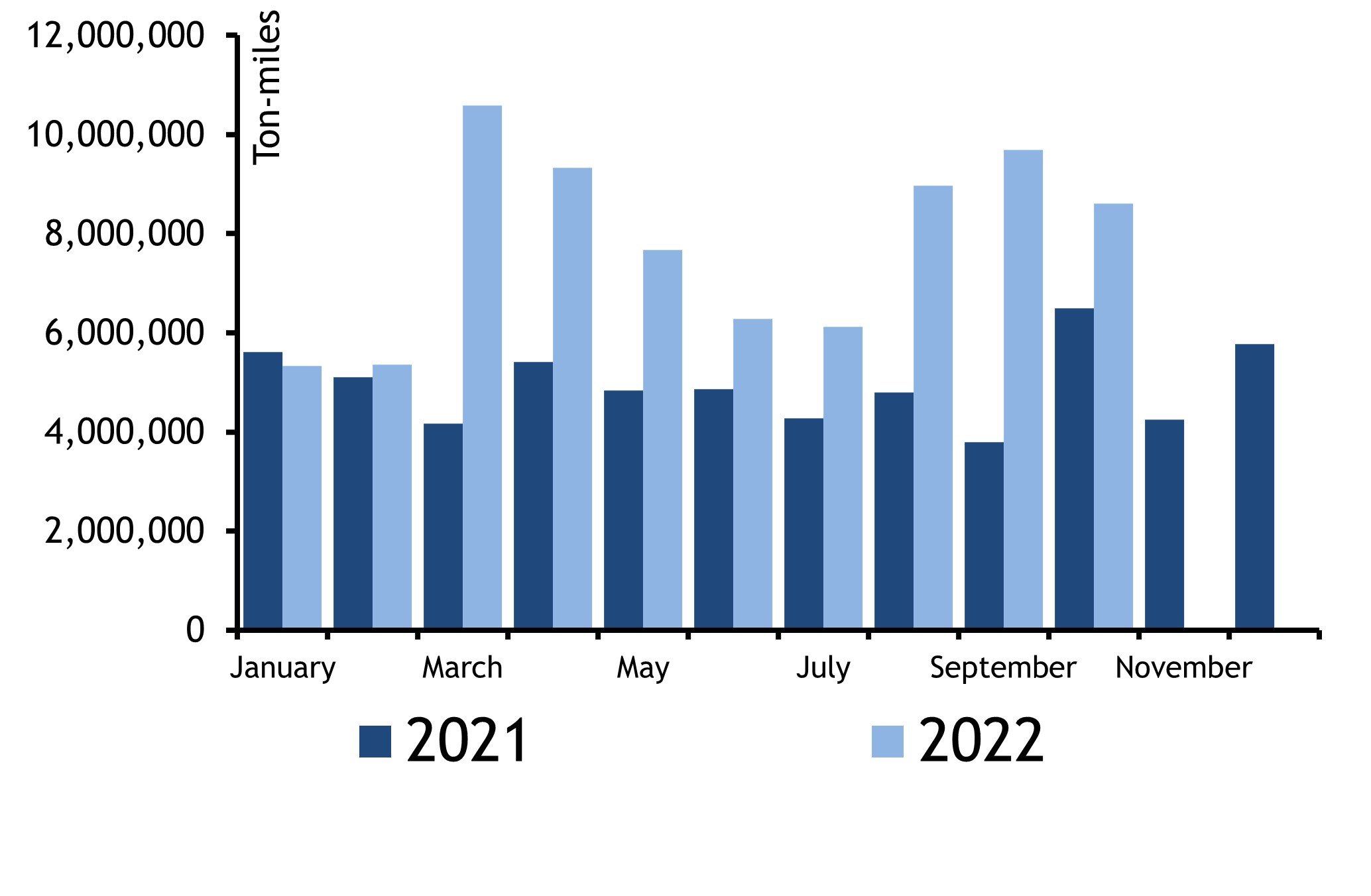 The second closest coal supplier to Europe is Colombia, with Puerto Bolivar located at a distance of about 4,350 miles from Rotterdam. This country increased coal exports to Europe by 58pc in January-October 2022 to 11mn t, and the ton-miles jumped from 30.4bn tmi to 48.2bn tmi. But internal instability and bad weather conditions are limiting the Colombian potential. The thermal coal exports from Colombia fell in January-October 2022 to 34.5mn t compared with 42.7mn t in the same period in 2021, data from shipping agency Naves shows. Colombian biggest mining firm Drummond's coal exports fell to 27.7mn t in 2022, to their lowest level since 2014. Torrential rainfalls and constant blockades of the railroads by indigenous communities cause a lot of disruptions in the supply. 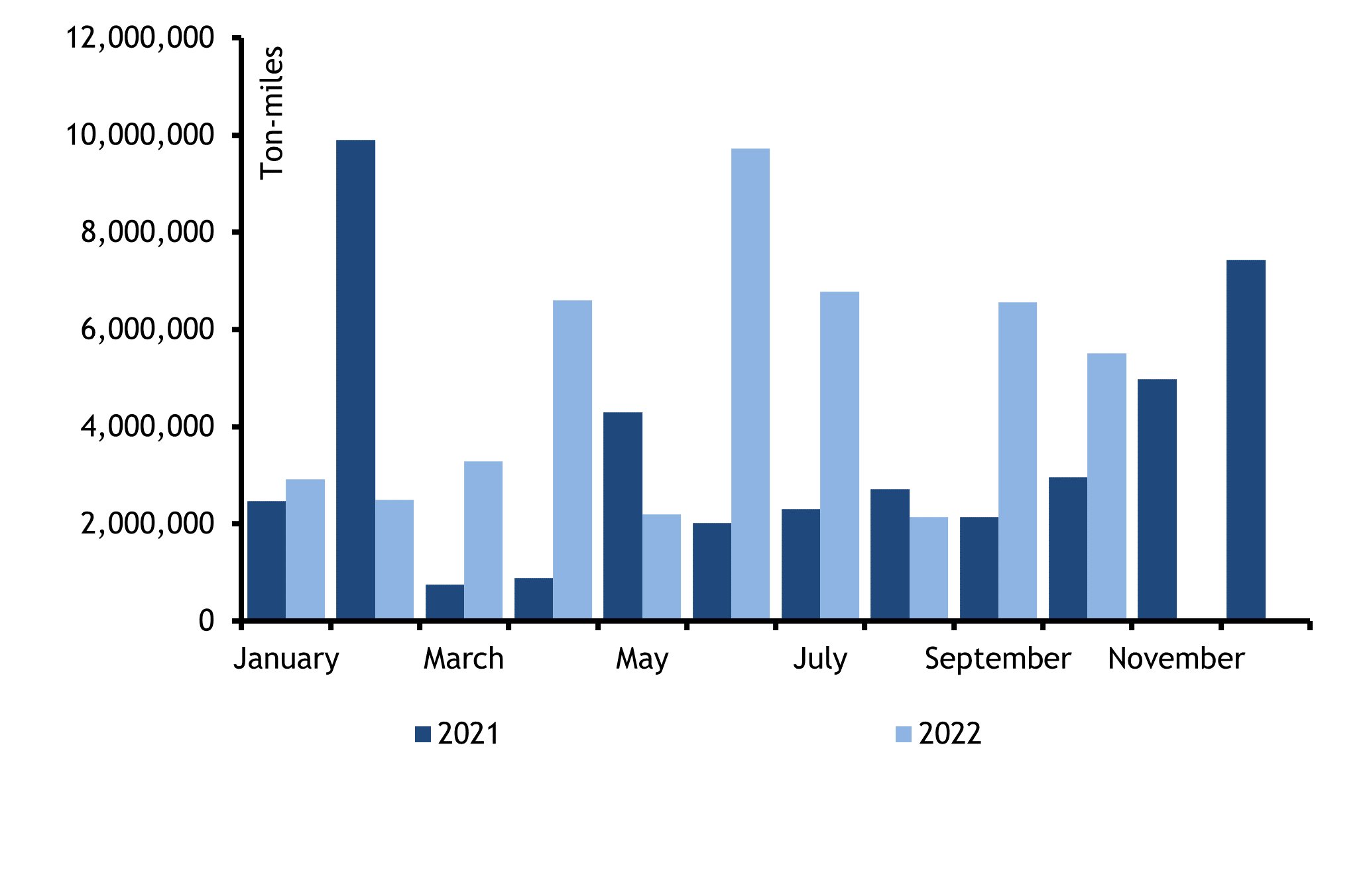 South Africa is the third closest partner and main saviour of Europe in the paucity of coal. In January-October 2021 the total exports from South Africa to EU and UK were under 2mn t, but this year it jumped by about 8 times to 16.5mn t, and the ton-miles increased to 113.2bn tmi from 14.1bn tmi.

Such boom in demand seriously affected rates and in the end of October 2022, the Panamax rates on the South Africa to Rotterdam route jumped by almost 50pc to $18.50/t since mid-September. But continuous derailments and strikes on the Transnet railways limit the coal exports from this country as well. Also the companies’ focus is shifting from Panamaxes to Capesize ships on this route. 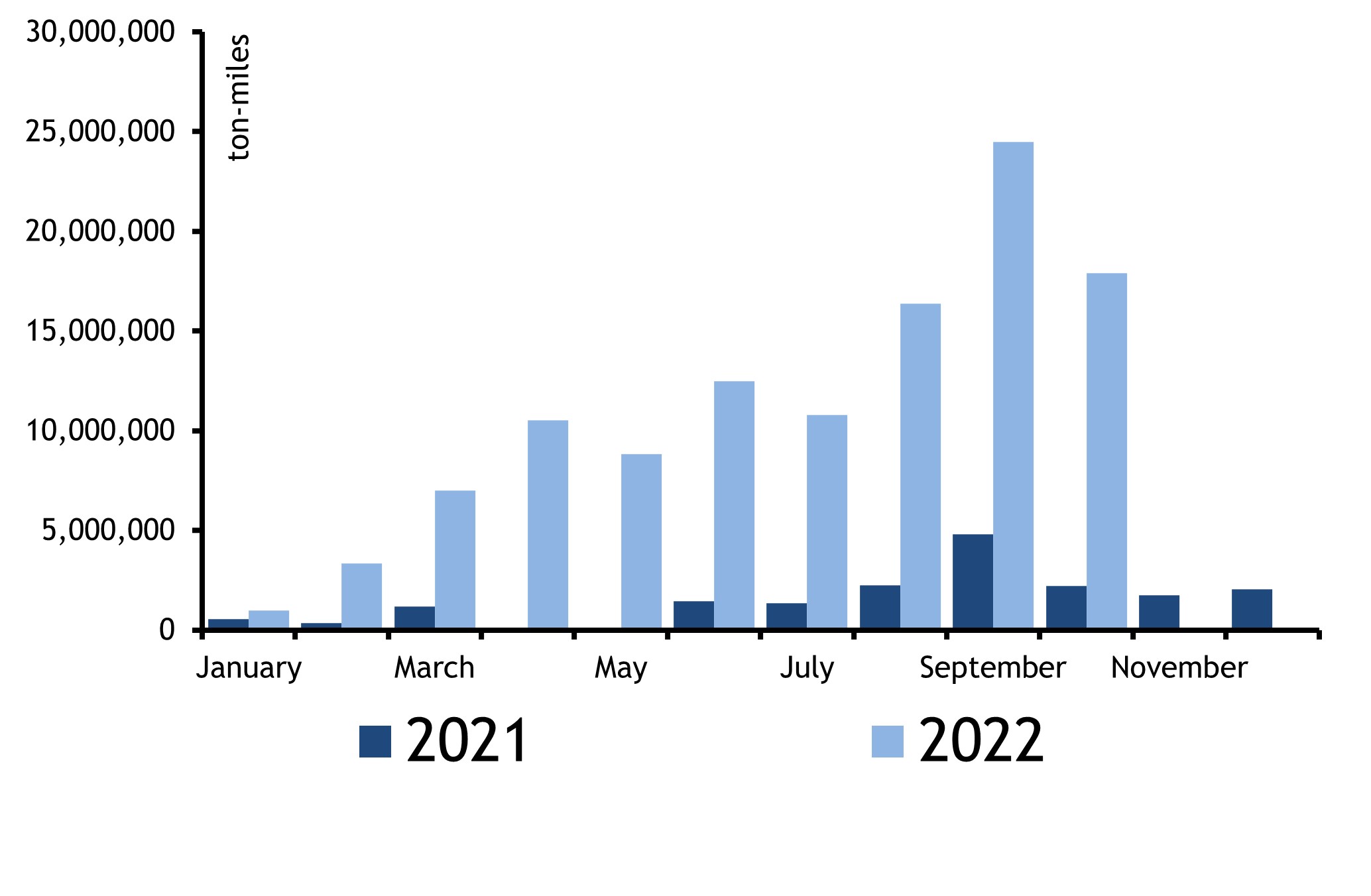 Australian coal exports to Europe and UK is rising dramatically too despite a distance of more than 13,400 miles. In January-October 2022 the volume of shipments increased by 52pc to 20.7mnt, according to GTT, and the ton-miles rose to 278bn tmi from 183bn tmi. 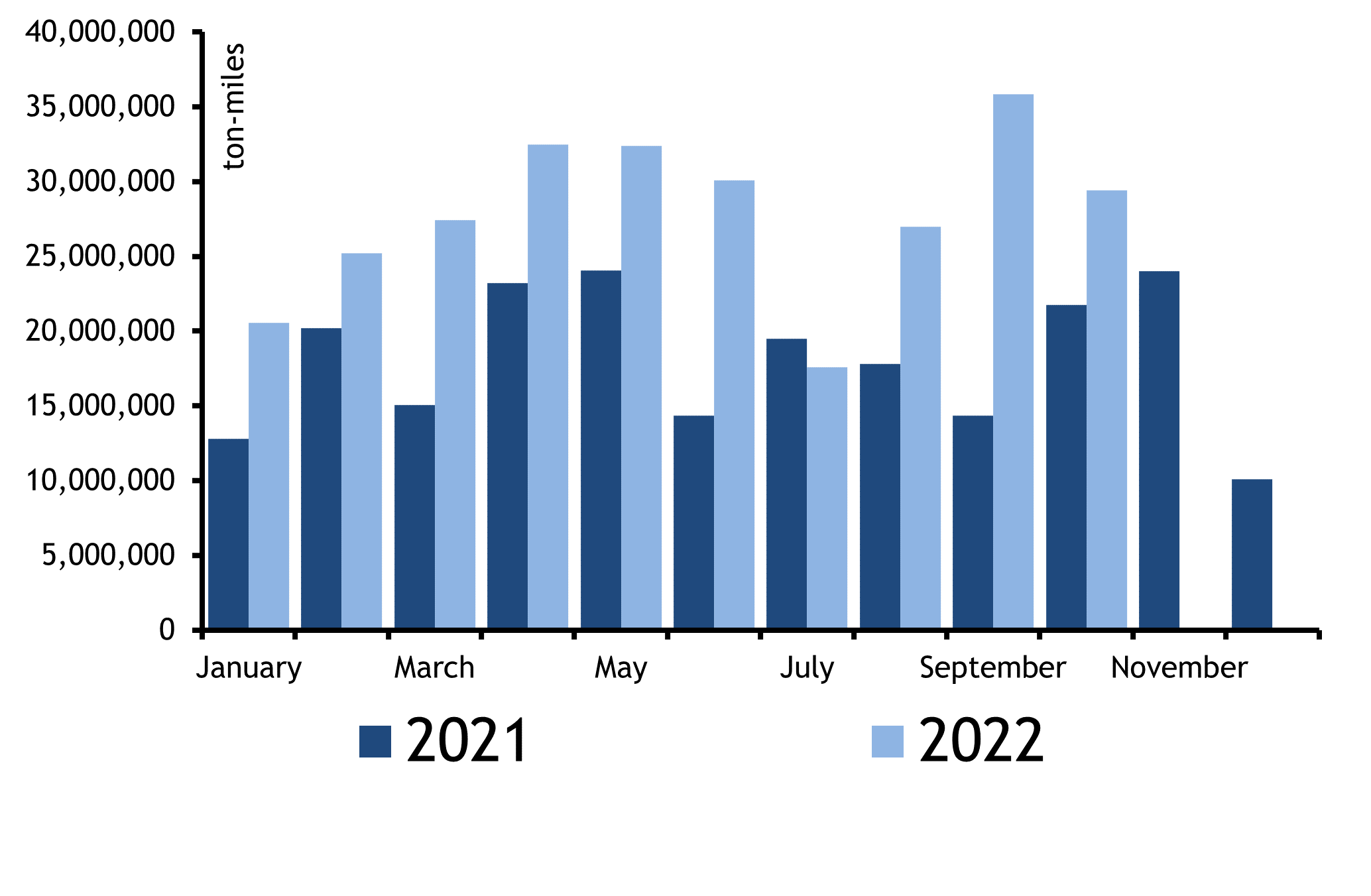 Indonesia which is usually focused on the Asia-Pacific markets and have sent almost nothing to Europe in 2021 changed its mind in 2022 despite the export restrictions, and exported about 4.6mn in January-October 2022. So the total additional ton-miles from five Russia-substitution countries is around 290bn tmi.

In 2021, Europe imported 41.9mn t of coal from Russia by sea, or approximately 559 Panamax journeys for a total of around 62bn tonne miles (tmi). Additionally, Poland imported 8.7mn t from Russia, which was carried by railway directly.

Russia is trying to redirect its coal routes as well but the number of countries which are ready to buy Russian fuels is limited, the discount for coal is rising and the freight rates are soaring with tonnage becoming more limited. In November 2022 the freight cost for Panamax from Ust-Luga to India was $50-54/t. Despite all this, coal exports from Russia to India have reached a new record high at 169.9mn t in 2022, according to Russian customs data. Exports to China increased by 41.6pc on the year in 2022 to 57.2mn t, by 92pc to South Korea to 19.9mn t, by 178.7pc to Turkey to 16.8mn t and by 140.5pc to India to 16.3mn t, provisional shipping data show.

The shipments to China, Turkey and some other markets like Morocco, South Korea and Taiwan are rising. Sometimes it even does not have to be seaborne either. For example, in late November 2022, a new, fourth Russia-China border crossing, the Nizhneleninskoe-Tongjiang, was been opened. In initial stages, its capacity is planned to achieve 5.2mn t/yr and then to increase up to 20 mn t/yr.

Matthew Mitchell, Market Reporter at Argus sits down with Ivane Abashidze, Georgia's rep to the IMO and Vice Chair to the IMO Legal Commitee as they discuss the IMO's legal committee and some of the issues it deals with including insurance and sanctions.

This episode takes a deep dive into the minor bulk trade in the Americas, and touches on the shifting global grain trade including Asia-Pacific’s increasing focus on South American grains over US Gulf coast and west coast North American suppliers.

Weight of Freight: Coasting through the winter and into 2023?

This latest Weight of Freight podcast episode focuses on the 2023 orderbook, the return of the European refineries, Polish demand and what these could all mean for freight rates.