As the US steel market turns the page on another year and returns from the holiday period there has been renewed momentum on domestic scrap prices while finished steel levels have also risen.

Steelmakers watched as scrap inventories and prices tumbled through most of the second half of 2022. December signaled the inflexion point on domestic scrap prices with momentum continuing into January. The Argus #1 busheling price in January was up by more than 27% since November levels. Domestic mills have had to restock on scrap even in the face of still moderate finished steel demand.

US HRC and prime scrap 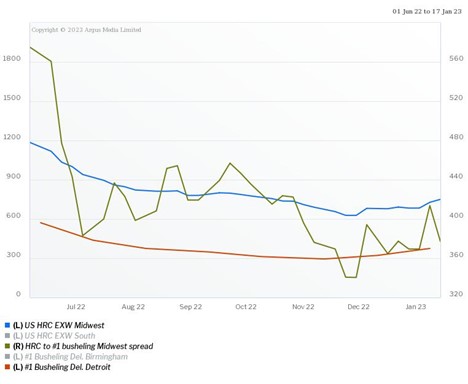 The spread between hot-rolled coil and #1 busheling remained mostly consistent since early December as higher coil prices continue to be offset by rising scrap prices. US HRC prices were at their highestA runup in in export prices to Turkey ahead of the US domestic January trade temporarily widened the spread as high as $66/mt, the largest since April 2022. However, the resurgent domestic US market quickly closed the gap as January prices marked a second month of increases. The spread between average US shredded scrap prices and the CFR Turkey price was in the low $20/mt range. levels since early October 2022 with steelmakers continuing to attempt to raise prices. Still, scrap prices were at their highest levels since August keeping the spread between at around $377/st.

Cleveland-Cliffs on 17 January announced it would be attempting to move its customers minimum HRC base price to $800/st while the week prior Nucor announced plans to raise sheet prices by $50/st. The latest Argus US HRC price moved up to $750/st on an ex-works Midwest basis. Domestic steel buyers have shown some renewed demand at the start of the year but remain cautious on the sustainability of higher prices. Currently, lagging monthly contract prices for coil are helping to boost domestic mill order books with pricing being more advantageous than the spot market.

US prime scrap and pig iron 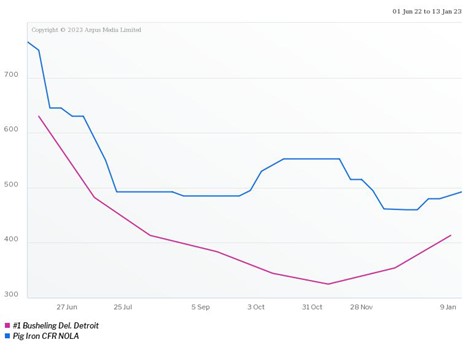 The gap between domestic US pig iron and ferrous scrap prices tightened from December 2022. Still, the gap has widened slightly through January on the back of higher pig iron levels. The premium for imported pig iron on a CFR New Orleans basis compared to #1 busheling prices in Detroit dipped as low as $46/mt at the end of 2022 but moved back up to $79/mt in the second week of January. Pig iron prices have only been below a $100/mt premium to busheling prices for a brief period in late July and early August 2022 since the start of Russia’s war with Ukraine.

Pig iron prices have been mostly rangebound since July 2022, trading in $90.25/mt band over that time frame with recent prices at $480/mt CFR New Orleans near the bottom of the band. The tighter spread on pig iron was able to keep a premium on US prime scrap prices as they fell for seven months into December. However, with the US scrap market momentum in December carrying into January, the gap has been sustained below $100/mt.

US obsolete grades and exports 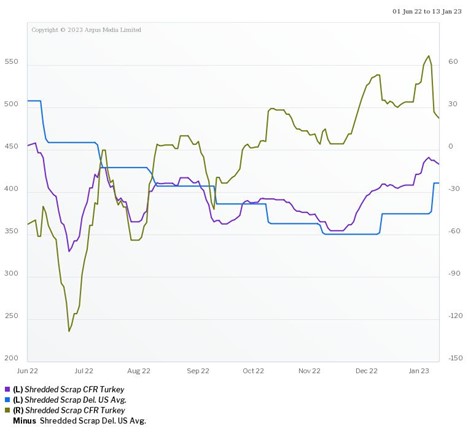 A runup in in export prices to Turkey ahead of the US domestic January trade temporarily widened the spread as high as $66/mt, the largest since April 2022. However, the resurgent domestic US market quickly closed the gap as January prices marked a second month of increases. The spread between average US shredded scrap prices and the CFR Turkey price was in the low $20/mt range. 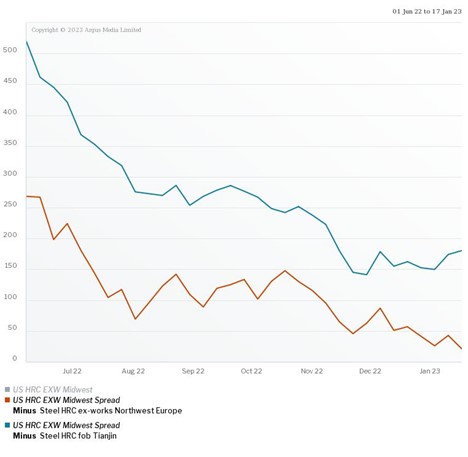 Global steel prices tracked US prices higher with all markets finding their floors in late November 2022. US prices continue to carry a marginal premium to European prices of around $21/st. The lack of discount to US prices and wariness around sustained higher domestic prices is likely to keep commodity-grade imports at bay.

In China, prices were at a $180/st discount to US prices on a fob Tianjin basis compared to $790/st discount a year ago.

Who’s in the driver’s seat?

Halfway through the first month of the year, it appears that scrap price momentum has helped to support steel price increases. Both markets have benefited from restocking at the beginning of the year that has supported higher prices. The remainder of the first quarter should be more telling on overall strength of both markets as real demand levels become more apparent. The prospect of higher scrap consumption driven by new capacity in the US remained capped by stubbornly low mill utilization rates. It remains to be seen if steel demand will be strong enough to maintain the higher prices and generate additional needs for scrap. Domestic steelmakers should find some additional support by less competitive import pricing as global markets have followed a similar trajectory to the US since November of last year.

Who’s in the driver’s seat: U.S. steel and scrap dynamics

The US steel market is barreling ahead to 2023, and it’s time again to look at what is driving the market. To kick off December, US flat-rolled steelmakers announced price hikes in a preemptive move as domestic scrap prices were poised to halt their seven-month slide.

Argus explores the essential role of copper in the global energy transition with LSEG.